Nepali politics in the post-truth era: Why are the effective lasting longer?

Oxford Dictionary defines ‘post-truth’ (adjective) as ‘relating to or denoting circumstances in which objective facts are less influential in shaping public opinion than appeals to emotion and personal belief’. It declared ‘post-truth’ as ​​the word of the year in 2016 due to the frequency of its use in various debates. Now, it has arrived in Nepali politics too.

This phrase got its impetus after Donald Trump’s election as the president of the United States and after Brexit in the United Kingdom in 2016.

The majority of people across the world responded to these events as something unexpectedly caused by the emotional response of the people at the cost of their rationale. The word ‘post-truth’ was used earlier by different writers in different contexts. But after the events mentioned, it has been used more in the context of politics, and now misleading politics against people is associated with ‘post-truth’ politics.

Observing political events around the election times now, it seems Nepali politics is already in the post-truth phase and it is likely to continue for the next several years.

Communication technologies have penetrated into people’s lives in such a way that they are not only killing their rationality but deviating from their perspectives. The socio-political life of post-modern times has been highly affected by the post-truth world situation, where real truth is less instrumental and different versions of truth have significant effects on different socio-political occasions. 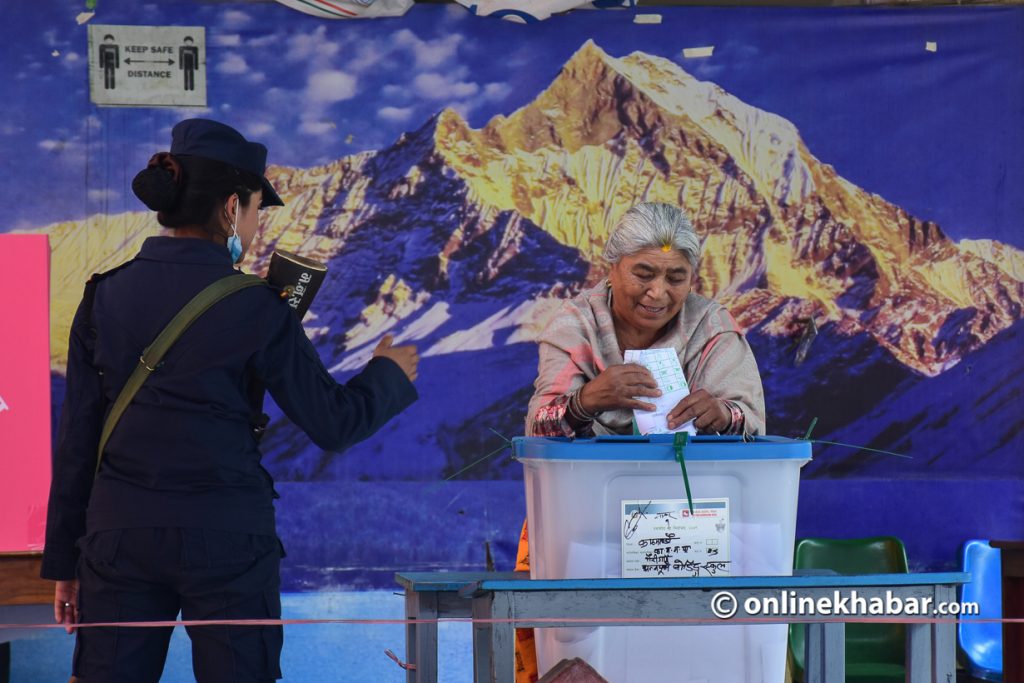 A woman casts her vote in the local elections in Kathmandu, on Friday, May 13, 2022.

Post-truth is also used synonymously as a ‘customized lie’ that is executed to influence public opinion by striking their emotionality and belief systems rather than rationality and strong reality. In this sense, at present, people wishing to influence others should be smart enough to create a discourse, which could easily satisfy and manipulate people by letting them accept the things before them without any counter-question as such.

Now, the question is being raised— has the rationality of humanity been suspended, and have emotion and personal belief systems been prevailing despite the fact that truth has so much evidence and valid things to project? What will happen to the entire world when post-truth starts ruling the age?

The so-called social media platforms are supposed to be significantly responsible for establishing a post-truth world situation by publicizing the deluge of distorted images, fake news, propagandist ideologies, and other information. Social media platforms as communication techniques and technologies have an intense effect to shape public consciousness, more particularly during the elections. Take an example from the Nepali politics itself.

The fervor of the general election has now gripped Nepali politics in a full-fledged manner. Various social media networks have been exploited to manipulate the common people. The intense instrumentalization of social media technologies for propaganda and manipulation has posed critical questions about the real truth.

Different rhetorics, which have already turned out to be a fiasco, are being used by major political parties to brainwash the public. They are committed to changing the voting behaviors of the masses through the rhetoric of nationalism, the employment generation, maintaining distance with India and China, taking back the Nepali territories occupied by India so far, and a host of others.

Some candidates have gone to the extent of assuring the voters to send them to foreign employment free of cost if they cast votes in favor of their parties. The most horrible scenario seen in Nepali politics, these days, is that even the so-called intellectuals holding high profiles in different sectors are the supporters of the leaders of such political parties, the ideologies of which have already been outdated, and are even seen in rallying cries during different occasions of the parties. What can we expect from them for whom the truth is not exactly what it is but what they believe and have faith in? The post-truth effects in Nepali politics have led it to be a pathological politics. Consequently, there is a growing disenchantment of genuine ones towards politics. This effect has merely strengthened frustration among the rational people in the country.

The whole country has been the victim of disinformation, manipulation and propaganda of the major political parties for the last three decades, which are not even tried to claim that they are doing things for “loktantra” (democracy) even today.

Are we, Nepali, really slavish to these people active in Nepali politics? Are we not aware of the fact that they are absolutely coming up with false promises and tall claims to manipulate us? Despite knowing the truth, we are under the influence of politicians and fall into the trap of their emotional blackmail. Emotional blackmailing has prevented us from being skeptical about our leaders and hence, they succeeded to brainwash us time and time again.

However, we have to pay much for the momentary blissfulness of falsehood after some time. An example is that of Nepal, where people are still struggling to uplift their socio-economic status even after the restoration of democracy and the successful conclusion of different political movements. In fact, the post-truth world may invite a host of scary situations—political instability, social unrest, confrontation among the members of the public, security threats to the particular country, interference of external forces to the country, and failure of the nations , to name a few.

On top of that, in the name of freedom of expression, it will also lead to anarchism, which in a long run, maybe a great threat to democracy itself. The post-truth situation in Nepali politics, therefore, needs critical scrutiny by the concerned ones to save democracy from its potential threats.

Tags:
Previous Article
Are Your Kids Using Social Media? Not Sure? Here’s How to Protect Them | lifestyle
Next Article
Abortion rights advocates used language of personal freedom to win moderates

How effective are political ads?