With New York’s 16th Congressional District primary just a few weeks away, Rep. Jamaal Bowman is calling out challenger Vedat Gashi for distributing campaign material that features a photo of the Black, progressive representative with what appears to be a noticeably darker skin tone.

The Gashi campaign’s mailer, which was sent out to households in the northern Bronx and southern Westchester County district late last week, included a set of bullet points decrying Bowman’s congressional record and a photo that appears darker than its original version. The picture is poorly lit – so much so Bowman’s features are almost imperceptible. Contrasted against the representative’s own mailer – a well-lit photo of Bowman smiling and looking off into the distance set under the words “peace and love,” the presentation is particularly strong. The other side of Gashi’s mailer features a bright and colorful portrait of the Westchester County legislator’s family.

The frontside of Gashi’s flyer / Vedat Gashi for Congress

“To be Black in America is to deal with multiple forms of racism on a consistent basis. This is one of them,” Bowman said in a statement to City & State. “There is an ugly history behind facial distortion to spread hate and disdain for political purposes. This is why voters were angry. This is also why we introduced the African American History Act and the resolution to fight hate and anti-Semitism. The -isms and -phobias in America are killing us, and stopping us from reaching our potential as a country. We need to be better educated to stop the hate that’s eating our country and democracy alive.”

Gashi’s campaign said that the photo was not altered. 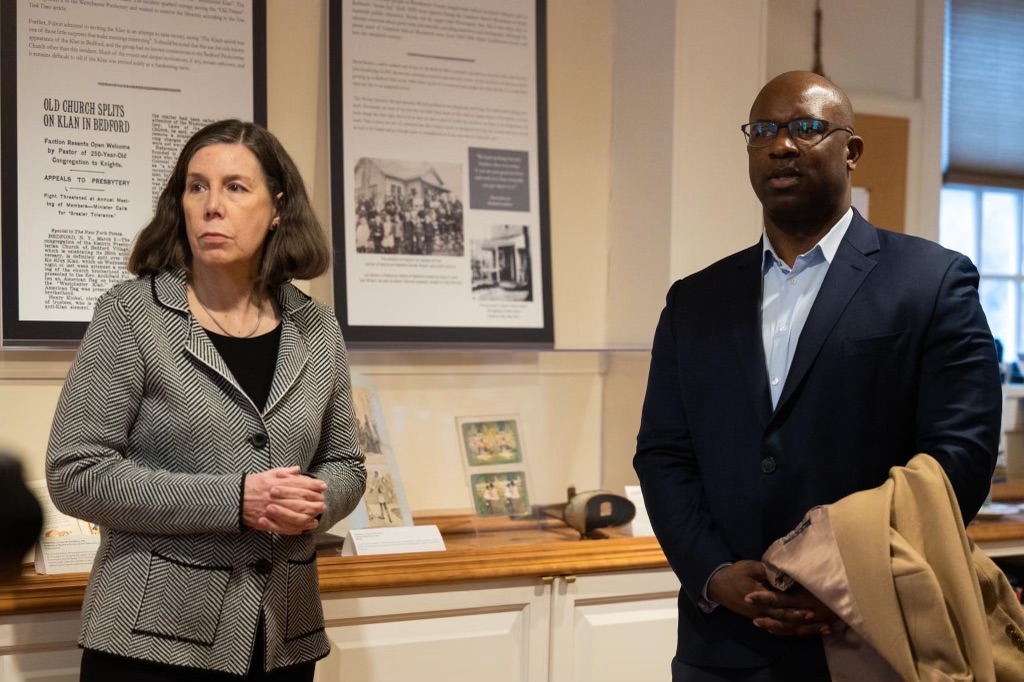 “This is just another example of how the incumbent refuses to be held accountable for his failed record and prefers to spread lies instead,” Gashi’s campaign manager Daniel Johnson said in a statement to City & State. “Rather than playing petty and performative politics, Vedat is focused on doing everything he can to help the families of the Bronx and Westchester.”

Gashi, who came to the US as a refugee when his parents fled Kosovo, has positioned himself as a moderate alternative to Bowman and touted what he describes as his ability to bridge differences within the Democratic Party. The recent redistricting shuffled voter dynamics in the district. According to data from the Center for Urban Research at the CUNY Graduate Center, the new district is 20.5% Black – a 9 percentage point decrease from the previous district. White residents make up 40% of the new district, up from 33%, and Hispanics make up 29% and Asians 7%.

While it’s not unusual for candidates to try and cast their opponents in a skewed light to influence voter perception, there’s a long, ugly history of political campaigns’ releasing materials that include images of their Black opponents with noticeably darkened skin tones.

Research indicates that when voters are learning about a non-white canidates’s personal background, sutble changes in their skin complexion can have an effect on how they perceive that candidate. And racial messages – whether they be implicit or explicit – have long been present in political campaigns.

In 2020, Republican South Carolina Sen. Lindsey Graham came under fire for sharing a digitally altered image of his opponent Jamie Harrison in a campaign ad. Georgia Sen. Kelly Loeffler ran a Facebook ad in 2021 that visibly darkened the skin of her challenger Rev. Raphael Warnock. And a study published in 2015 found that darkened images of former President Barack Obama were often tied to negative ads run by then-Republican nominee John McCain’s campaign during the 2008 presidential election. In New York, Rep. Yvette Clarke’s reelection campaign sparked backlash after her progressive challenger Adem Bunkeddaeko accused her of sending out mail that also darkened his skin in 2020. Clarke, who is also Black, denied the charge.

Basil Smikle, a Black political strategist and former executive director of the state Democratic Party, said candidates have used skin tones in ads to scare white voters for years in hopes of mobilizing them against Black candidates. On the flip side, magazines and media entities have also long been guilty of lightening black skin tones.

“Both of those extremes – the darkening and the lightening – are meant to feed into stereotypes and caricatures of Black people,” he said.

While the Gashi campaign mailer might not rise to the level of some of the more egregious examples, his campaign declined to comment on why that particular image was the one they selected even if it wasn’t digitally altered like they say.

“Any candidate and consultant should be mindful of the racial history and sensitivity to skin tones and the stereotypes behind that,” Smikle said. “There’s no place for this in our political dialogue. I don’t care whether you’re Democrat or Republican – any consultant or candidate should do better at understanding the racial political sensitivities to skin tone.”

Tara L. Martin, a political consultant and member of City & State’s advisory board, said it’s disappointing when political candidates side step focusing solely on policy and instead draw on harmful stereotypes that dehumanize Black candidates. Falling back on the “lowest common denominator” by adding a level of connotation that is incendiary, she said, is a sign of a weak campaign.

“It’s not just what we verbalize, but how we intentionally decide to communicate with others. As a dark-skinned Black woman, I am all too familiar with the sting of these connotations, whether intentional or not. From Emmit Till and Willie Horton to Barack Obama and Ilhan Omar, we have to directly confront and break apart these deeply rooted oppressive systems,” Martin said. “It’s my hope that this incident can become a teachable moment for Gashi. Political candidates who continue to utilize these failed covert scare tactics need to understand what those connotations mean and how harmful they are for our broader communities.”

The progressive Bowman has been facing a serious challenge in his first bid for reelection. Gashi was endorsed this week by former Rep. Nita Lowey as well as former Rep. Eliot Engel, who Bowman unseated in 2020. While Bowman had outraised Gashi over the cycle, the challenger actually had more money on hand than the incumbent as of the latest filing on June 30 – $551,000 to $426,000. Also in the Democratic primary is Westchester County Legislator Catherine Parker. News 12 reported that the fourth candidate on the ballot, Mark Jaffe, dropped out on Sunday and endorsed Gashi.

– with reporting by Jeff Coltin