Mainstream news media outlets have, in recent years, begun to create advertisements that look like news articles on their websites and on social media. My research raises questions about whether this modern form of advertising might influence those outlets’ real journalism.

These specific advertisements are called “native advertising,” but are also tagged as “sponsored content,” “partner post” or other labels consumers don’t understand. They look like news articles, with headlines, photos with captions and polished text. But really they are ads created by, or on behalf of, a paying advertiser.

With declining revenue from traditional display advertising and classified ads, news outlets are increasingly relying on native advertising – a sector in which US spending was expected to reach $57 billion by the end of 2021.

Fashion and entertainment companies buy native advertising. So do corporations that produce products with potentially significant environmental or health connections, such as fossil fuels, opioid medications and cigarettes – including in attempts to counter negative news coverage.

In one example from spring 2021, Philip Morris International – the tobacco company – ran a native advertising campaign across many media outlets, including The Boston Globe, The New York Times, Reuters and The Washington Post.

The ads complained about the “disinformation campaigns that muddy the truth” regarding the benefits of vaping products while themselves muddying the truth.

In the past, the tobacco industry sought to manufacture public uncertainty about the harms of its products. This time, Philip Morris is using a practice that media critics say is deceptive and media scholar Victor Pickard calls “subterfuge … creating confusion between editorial and advertising content,” to make claims about the benefits of its products.

These advertisements that look like real news are labeled as ads, as required by the Federal Trade Commission. But research studies have repeatedly shown that those labels are largely ineffective at helping readers distinguish between the two types of content.

Many media companies have created content studios, separate from their newsrooms, to create native advertising on behalf of corporate and special interest groups. While newspapers traditionally had ad departments that designed and mocked up advertisements for their clients, today’s native ads are in the form of a “story” that often does not focus on – and sometimes does not even mention – its sponsor in order to resemble the seemingly objective journalism it imitates.

Sometimes those efforts have the help of intermediaries such as so-called “product marketing” teams that work between the newsroom and studios. A former “creative strategist” at The New York Times says that arrangement allows publishers “to skirt the implication that news staff work directly with brands to craft commercial content.” In other cases, journalists write for both the newsroom and their publisher’s content studio.

Because native advertising typically has no bylines, most people are unaware that advertisements may be created in such close connection with mainstream newsrooms. Former employees, including a former executive editor of The New York Times, say most publishers are not transparent about it with their audiences. One digital journalist told researchers, “Some people will say the ad is labeled so it’s not bad. That’s crap… the unsophisticated won’t get it and then they’ll click on something meant to look exactly like a story. That’s a problem.”

When native ads are shared on social media, they’re often distributed in ways that further confuse or deceive audiences.

The Wall Street Journal, for instance, has retweeted posts from its Custom Content studio from the same Twitter account that promotes its news content. While this particular retweet disclosed the commercial nature of the original tweet, this is not always the case.

More than half the time, the FTC-required advertising disclosures disappear when the content leaves the publisher’s website and is shared on Facebook and Twitter. For example, when I recently shared an American Petroleum Institute native ad on Twitter, the disclosure disappeared – a violation of the FTC’s labeling mandate. 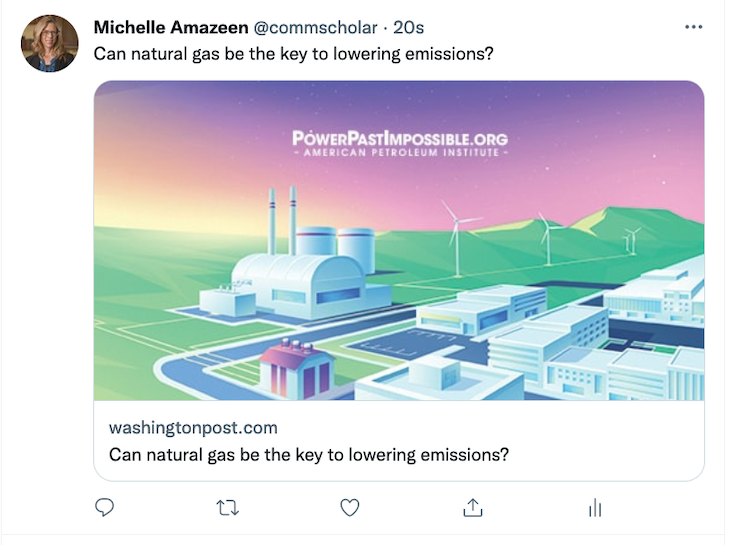 When retweeted, native advertising appearing in The Washington Post from the American Petroleum Institute was no longer labeled as a paid ad.
Michelle Amazeen

I believe it is the responsibility of publishers, not consumers, to ensure that sponsored content is accurately labeled when shared online. Otherwise, people will amplify undisclosed commercial content they think is genuine news.

I have another concern about this type of potentially deceptive advertising. Since as early as 1869, anecdotal evidence has indicated that reporters are hesitant to write about advertisers that are lucrative to their news outlet. My recent research with digital advertising scholar Chris Vargo signals that similar concerns may occur with this new form of advertising.

We counted all the native advertisements between 2014 and 2019 we could find from The New York Times, The Washington Post and The Wall Street Journal, by looking at native ads those news outlets posted on Twitter and with a custom search process we built on top of Bing. We noted what dates the native ads were published and what company sponsored them.

We also used the GDELT database, which collects online news stories from those three outlets and many other mainstream, partisan, and emerging news sites across the US In that data, we noted the number and dates of news stories naming major companies.

We found 27 companies for which there was enough information in both data sets to make a meaningful connection. For each of those 27 companies, we charted how many mentions they had in news stories over time, and compared those time periods with the timing of that company’s releases of native advertising.

For example, Wells Fargo – a multinational financial services company plagued by a litany of scandals, such as deceiving customers with fake bank accounts – engaged the content studios of The New York Times, The Washington Post and The Wall Street Journal to create nearly a dozen native ads. One, created by The Washington Post’s BrandStudio, touted how Wells Fargo was investing in a cleaner environmental future. If it had been a real news article, it would have reported that the company was also financing the controversial underground oil transport system, the Dakota Access Pipeline.

Our study found statistically less reporting on Wells Fargo not only within those three elite news organizations but across all US online media following the native advertising campaigns.

[Over 140,000 readers rely on The Conversation’s newsletters to understand the world. Sign up today.]

Native ads are potentially very deceptive to consumers, in their content, their presentation and how they are shared on social media. Our research does not prove a direct connection, but when we add it to the anecdotes that news management discourages stories critical of important advertisers, we also wonder about the power of native ads over journalists’ supposedly independent decisions regarding what to cover and when.