One thing voters should look out for when navigating election media coverage is the reliability of the polls and focus groups behind the headlines. Always read the fine print. Both the Hobart Mercury and the Australian Financial Review claimed on their front pages this week that Anthony Albanese was largely unknown by voters.

Nine’s financial daily led its Easter weekend newspaper with an exclusive story ‘Better the devil you know’: Undecideds lean towards PM and a feature inside saying Albo “was poorly defined in the minds of participants” and “neither group could identify any of his strengths ”.

Earlier in the week the News Corp tabloid asked “Albo Who?” on page one, with a second story inside asking “Anthony Who?”.

The political editor for the AFR, Phillip Coorey, said undecided voters were “leaning towards Scott Morrison in the belief he is the least bad option come the May 21 election” and “the majority of them say they are prepared to hold their nose and give the government another go”.

Given a choice of two underwhelming leaders, undecided voters seem inclined to stick with the devil that they know. https://t.co/VojAVtf3Zn

Readers were told the research was based on discussions conducted by Ipsos, a research firm that canvassed two groups of voters drawn from both Liberal and Labor held seats.

The AFR did quote Ipsos pollster Don Pole saying no definitive conclusions could be drawn from just two groups: “the election may be closer than the polling implies”.

But readers weren’t told that the group discussions had just five participants each. The devastating conclusions for the opposition leader were based on just 10 voters.

Ipsos told Weekly Beast the group discussions had five participants each – five in Sydney and five in Melbourne. The Financial Review based not one but two stories on these 10 undecided voters.

Meanwhile the Mercury’s story, sub-headlined “Tassie Shocker”, claimed a quarter of voters don’t know Albo’s name based on a survey of “50 people at random”.

“These are some of the findings of a poll conducted on April 3 by The Mercury in the north west coast town of Penguin, population about 8000, which, for the past seven federal elections, has broken the way of the party which went on to form government,” the Mercury said.

7.30 host Leigh Sales has become the third high-profile ABC presenter to quit Twitter. Sales deleted her Twitter profile this week several months after writing about the toll of the “non-stop, personal, often vile, frequently unhinged and regularly based on fabrications” abuse she got on the platform.

Sales has followed in the footsteps of News Breakfast co-anchor Lisa Millar, who deactivated her Twitter account after being subjected to daily abuse about her interviewing style on the breakfast show.

Earlier former Q+A host Hamish Macdonald said one of the reasons he left the ABC was the abuse he received when he was fronting the program.

Sales told Weekly Beast there had been no particular trigger for her decision, although elections were a particularly bad time on Twitter.

“I just found I’ve been using it less and less over the years and, from past experience, I know election campaigns dial up the hyperpartisan abuse and bullying,” Sales told Weekly Beast.

“So I figured it was just a good time to deactivate. No specific incident funnily enough, after the years of ludicrous piles-on. I agree with all the sentiments expressed by Dean Baquet in that email sent to NYT staff about why they’re not viewing Twitter as that useful anymore.”

After a week that was dominated by flimsy polls and gotcha questions, the Sydney Morning Herald raised the bar by choosing on Good Friday to focus on a broken election promise by Scott Morrison.

“When he told voters at the last election that he would create a federal anti-corruption commission, the prime minister committed himself to introducing a proposal to parliament and fighting to have it passed,” the Herald said in a rare front-page editorial. “He hasn’t. It is a broken promise.

“Morrison’s failure to even try passing his integrity commission legislation is not just a broken promise. It raises serious questions about his understanding of transparency and honesty in government.”

In what must be some of the most positive coverage the Greens have had in an election campaign, Bandt’s “Google it mate” answer when Financial Review reporter Ron Mizen asked him what the current wage price index is went viral.

“Elections should be about a contest of ideas,” Bandt said.

The moment has already been immortalized by an Australian graphic artist in a T-shirt, a mug and a cotton tote bag.

Andrew Bolt on Sky News Australia had a unique way of assessing the performance of the opposition leader this week. He brought in “body language expert” Dr Louise Mahler who studied videos of Albo and declared he has “all the signs of performance anxiety” based on the way he moved his arms and clenched his jaw.

“This is not easily solved, and he’ll be going into a negative spiral at the moment in his thinking which will be very difficult to overcome with this pressure of the campaign,” Mahler told Bolt.

Bolt and Mahler also agreed that appearing with the six foot eight Labor Hunter candidate Daniel Repacholi was a mistake because it made the Labor leader look like a “shrinking candidate”.

When ABC managing director David Anderson chose Justin Stevens as director of ABC news, a new job had to be found for current affairs boss John Lyons, who had been overlooked for the top job.

Lyons formerly ran current affairs and Stevens, the executive producer of 7.30, reported to him as did the EPs of Australian Story, Four Corners, Q+A, Insiders, Foreign Correspondent and the investigative reporting team.

Under the new structure, the roles had been reversed. Lyons, 60, now reported to Stevens, 37. 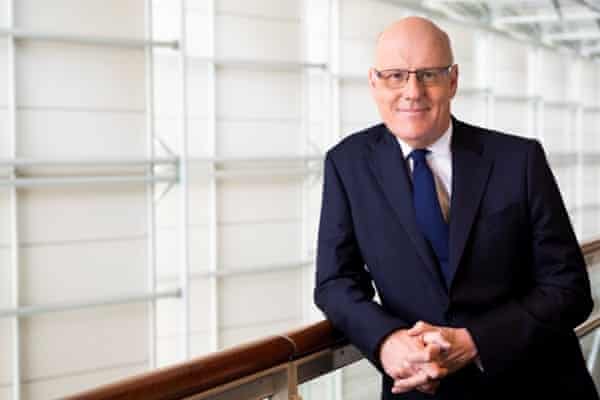 John Lyons, who has been appointed to the newly created role of the ABC’s global affairs editor. Photographer: Photo courtesy ABC

Stevens took just two weeks to find a solution, appointing Lyons to the newly created role of global affairs editor, which will see him return to reporting in a similar role to the one once held by chief international correspondent Philip Williams who retired last April.

Lyons has been a foreign correspondent in Washington, New York and Jerusalem.

Of course there is now the small problem of filling Lyons’ role when he goes back on the road in June.

The obvious choice would be Jo Puccini, who runs the ABC’s investigative reporting team. Although she is relatively unknown to the public. she has a stellar reputation inside Aunty.

An ad for a new EP of Four Corners went up last week and an ad for Stevens’ position at 7.30 is yet to be published.

“International reporting is one of the core services the ABC provides to our audiences,” Stevens said. “Our correspondents make sense of the key overseas events and issues from an Australian perspective and analyze how they impact us at home.”