Fact check: how do I recognize fake news? | World | Breaking news and perspectives from around the world | DW

In April, a screenshot of a quote from Annalena Baerbock circulated on Facebook. In it, the German Green Party leader and then candidate for Chancellor allegedly called for an end to private pet ownership because pets would consume too much CO2.

In Brazil in 2018, also during an election campaign, millions of messages were sent via WhatsApp in favor of right-wing populist President Jair Bolsonaro. These messages indicated, among other things, that the left Workers’ Party (PT) was planning a communist dictatorship or wanted to legalize pedophilia.

During the coronavirus pandemic, videos and posts by medical professionals whose statements about the coronavirus contradict other scientific findings have repeatedly gone viral.

What do these examples have in common? It is fake news – also known as disinformation, i.e. information that is partially or even completely false and is deliberately disseminated in order to influence political views or to generate as many clicks as possible.

Fake news often spreads rapidly and has become a huge problem in the digital world. Many users find it difficult to part with credible information.

Here are some tips on how you can counteract the flood of misinformation. This article is mainly about fake news in writing – DW will publish further articles on fake pictures and videos.

Be vigilant and suspicious

In the latest Digital News Report from Oxford University’s Reuters Institute, more than half of respondents said they had recently seen false or misleading information about the coronavirus. More than a quarter remembered misinformation about celebrities in this regard.

Anyone who uses the Internet should maintain a healthy level of suspicion and not take everything at face value – especially when it comes to emotional and controversial topics or something that comes off too spectacular and garish.

This was the case with the alleged quotation from Baerbock mentioned above. She had never called for a pet ban, and yet many fell for the quote.

That might have been avoidable if users had taken a step back and asked themselves the following questions:

Who is behind it?

Fake news often reaches users as post on platforms such as Facebook, Twitter or Instagram. Take a close look at the account that the news was spread through. This can reveal a lot about the person’s interests and beliefs. The account could very well be operated by a so-called social bot or troll. (More on this in a separate article.)

Messenger services are another way of spreading dubious information. Take the aforementioned WhatsApp messages bombed by Brazilians during the 2018 election campaign. According to the newspaper Folha de S. Paulo, Brazilian companies had ordered Internet service providers to send mass messages in favor of Bolsonaro. The mobile phone numbers of the recipients came from the election campaign of the right-wing populist and third-party providers.

If you receive content through messenger services, you can ask the sender where they got the information from. In most cases, the person forwarded it without questioning its veracity or origin. 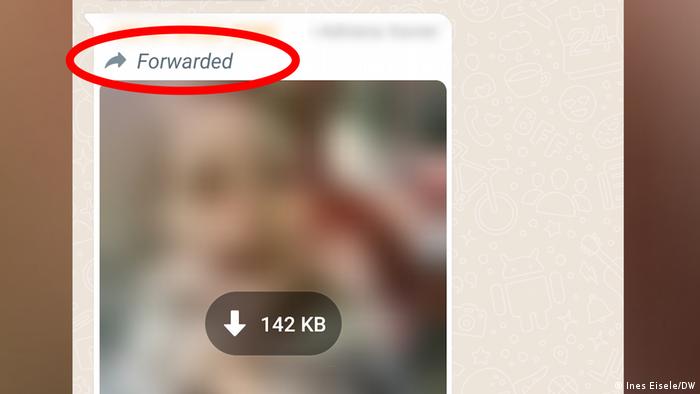 The issue of forwarded fake news is becoming more and more problematic. As a result, WhatsApp introduced some changes. A small arrow above a message indicates that this message has been forwarded to you (see screenshot). Two arrows one above the other show that this message has already gone through a chain of at least five chats before it reached you. If messages have been shared that many times, their forwarding is limited. In some countries such messages are marked with a small magnifying glass. This allows you to call up the Google search function with the message text.

If there is a link in the message, you can also check which media or other pages it leads to. A link within a message does not necessarily mean that the information is correct. There are websites that are unscrupulous about journalistic principles and rely on dramatization and exaggeration in order to generate as many clicks as possible.

You may also find that you’ve ended up on a government-controlled site, private blog, or even a site that has satirical content. You should look for a disclosure in the publication claiming editorial responsibility. And a number of countries require a legal notice for every commercial offer. Also, watch out for text errors, excessive advertising, and unprofessional looking layout.

As an example, take a look at the World News Daily Report website. The site looks modern and professional. But the focus seems to be mainly on peculiar and bizarre incidents. A ship that disappeared in the Bermuda Triangle, for example, appears years later in the Sahara; a hairdresser ends up in jail for making voodoo dolls out of the hair of his customers. According to another text on the page, a brother and sister from New Jersey are allowed to get married after a 10-year legal battle.

Only a closer look reveals that this is a website devoted to satirical content. The portal’s logo is “World News Daily Report – Where facts don’t matter”. If you scroll down to the bottom of the website you will find further explanations that everything on the website is fictitious. 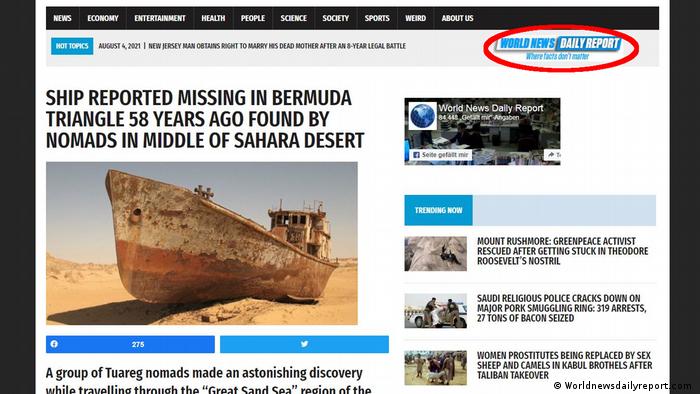 Don’t take everything at face value

A word of warning: behind unknown links, attempts to access your data for fraudulent purposes can also lurk. If you are asked to enter passwords or personal information in an inappropriate place, it could be a so-called phishing site.

Are the claims true?

It is important to carefully examine the actual content of a post, forwarded message, or other text. Are the claims or images coherent and realistic?

To find out more about the topic or problem at hand, you can do some research on search engines to see what else is reported. For example, if a politician made a memorable statement or something groundbreaking happened, other trusted media outlets will have picked it up. Your articles are usually best found in search engines under the “News” tab. You can also change search options such as the publication period or the language. 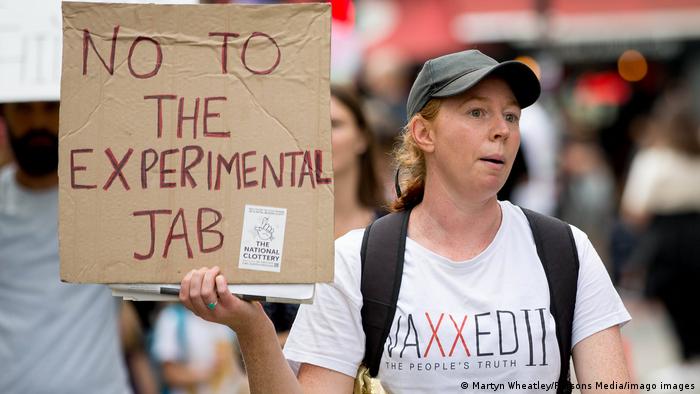 “The People’s Truth” is not necessarily based on facts

The websites of official bodies and recognized institutions are also a good place to go to find credible information. For example, the World Health Organization and the Robert Koch Institute are far better sources of coronavirus-related content than YouTube videos posted by individual medical professionals. Even if they are experts in their field, it is possible that such people express individual opinions, do not have a complete overview or are even coronavirus deniers.

If there is any specific clue as to the origin of the information in the message under review – such as a particular study, party platform, or speech – if possible, look up the original to see what was said there. Sometimes quotations are abbreviated or taken out of context, giving them a different meaning.

There are also various websites devoted to clearing up fake news and separating fact and fiction. In German-speaking countries these are Correctiv, Hoaxsearch and Deutsche Welle. Reliable international websites include FactCheck.org, Snopes, and Full Fact.

As an Internet user, you can counteract the negative impact of fake news by not simply forwarding what has been sent without your own due diligence. Misinformation is not necessarily passed on out of malicious intent or conviction, but rather out of a lack of attention or because it is driven by strong emotions.

If in doubt about where the information came from and how believable it is, don’t share it. Instead, speak to the sender about your concern. You can also report suspected false positives to the platform operators and / or a fact-checking website.

This article was originally written in German.

McGrath ’24: The “Breaking Off Culture” Debate Reinterpreted: The Imagination of Restorative Justice in Online Discourse