MANILA – Filipino audiences get their news online primarily through social media, which sets them apart from other markets where citizens can find news directly from news websites or apps, or from portals that aggregate news from various sources.

This is evident from a study of news trends presented on the first day, Monday evening (PH time) of a four-day global virtual conference of news publishers.

The Philippines has been described as a “mostly social” market, with 51 percent responding to social media when asked, “Which of these have been the ‘main’ ways you came across the news over the past week?” In second place is search with 24 percent, followed by mobile notifications with 10 percent.

Prof. Rasmus Nielsen, Director of the Reuters Institute for the Study of Journalism, presented the study in his lecture on “Business Barometer: The trends behind the trends” on the occasion of the opening of the 72nd World News Media Congress. The topic looked at trends that can affect publishers’ investment decisions as they weather pandemics and other challenges.

On the same boat as the Philippines when it comes to gathering news from social media, Brazil and Malaysia are, according to Nielsen’s presentation.

The other three “online access models” consist of countries sourced directly from news websites or apps such as Hong Kong, Finland and Norway; those from various sources such as Australia, Canada, and the United States; and Japan, whose people rely on aggregator sites for news.

Globally, across all age groups and countries, a “large majority said they prefer to access online news via search (25 percent) or social media (26 percent)”. But for those under 35, social media made up 34 percent of the preference. 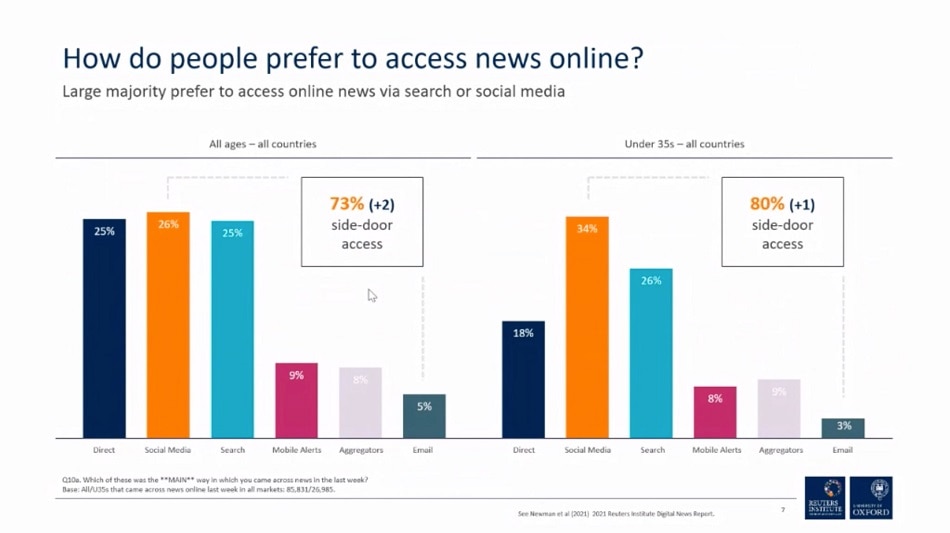 Other areas that Filipinos are involved in

This Reuters study of the news audience in the Philippines is compatible with an earlier survey by a local youth group in collaboration with Social Weather Stations that more than half of Filipino youth are politically active on social media, especially Facebook and Twitter.

Earlier this year, Reuters released the Digital News Report 2021, which “examines the impact of the coronavirus on news consumption and the economic outlook for publishers. It looks at advances in new online paid business models, trust and misinformation, local news, impartiality and fairness in reporting. ”

This study included a sample size of 2,029 people from the Philippines, whose population was estimated at 111 million, and who had internet penetration of 78 percent of the country’s adult population.

However, the same Pulse Asia poll from September 6-11 found that 91 percent of the adult population cited television as their primary source of information.

Insights like this are important as Filipinos enter another 120-day parliamentary term, which officially begins January 9, 2022. These times, including the over 80 days of the official election campaign starting February 8, 2022, were usually marred by intense information or even disinformation campaigns. News sources are important because they could influence voting decisions on Election Day or May 9, 2022.

Elsewhere in the world …

Nielsen’s 4 “online access models” result was part of a larger series of results presented by the Reuters Institute director during the press conference, including a survey of 132 high-level industry leaders from 42 countries on their views on change Dynamics, needs and prospects for the newsroom in the face of the ongoing pandemic.

This study examined hybrid work arrangements, the difficulties publishers have in acquiring and maintaining technology and data skills that are in high demand elsewhere, and gender and ethnic diversity in the newsroom.

Meanwhile, publishers are generally optimistic about their business. Almost half of the respondents said their company is at an advanced stage in its digital transformation efforts.

Print, digital and advertising revenues remain important. However, publishers expect nearly 21% of total revenue to come from other sources within the next 12 months, said Damian Radcliffe, professor and fellow at the University of Oregon and Columbia University. Radcliffe showcased World Press Trends 2021-2022, sourced from CEOs, publishers and media owners in 58 countries in 25 high-income and 23 developing countries.

Freedom of the press is abusing the editors, and this is not limited to developing countries, as cyberattacks, online harassment and denial of access to information are widespread in the developed world, Radcliffe said.

The World News Media Congress is hosted by the World Association of News Publishers, the global organization of the world press. The annual event is attended by hundreds of news owners, executives, publishers and journalists.

From Facts to Fake News: How Information Is Skewed
admin December 1, 2021