President Arif Alvi said Thursday that the United States should play a leadership role in curbing the spread of fake news and climate change disasters. As an example, he cited the United States as a country that spreads fake news about changes in the voting behavior of countries. He said this when speaking in a virtual event organized by the American University Washington DC’s School of International Service on November 18, 2021. Pakistani President Dr. Arif Alvi was the honorable guest speaker. He was accompanied by Ambassador Akbar Ahmed, SIS Professor and Ibn Khaldun Chair for Islamic Studies at the AU, for a moderated Q / A with the audience.

The hostess, Dean (School of International Service) AU, Christine BN Chin, started with a brief introduction to President Arif Alvi. She said that Alvi became chair of the first Pakistan International Dental Conference in 1981. In 1997, Alvi also became a diplomat on the American Board of Orthodontics. He prepared the constitution of the Pakistan Dental Association and became its president. He was also the chairman of the 28th Asia Pacific Dental Congress. He later joined PTI and became President of Pakistan in 2018. Then Ms. Christine BN Chin introduced the moderator to Ambassador Akbar Ahmed, who is a Pakistani-American academic, writer, poet, playwright, filmmaker, and former diplomat. He currently holds the Ibn Khaldun Chair of Islamic Studies and Professor of International Relations at the American University in Washington, DC

The event aimed to address the problems of Pakistan as a nuclear power, home to several ancient civilizations and a place where governments have alternated between civil and military, secular and Islamic, democratic and authoritarian governments over the decades. Pakistan has at times a negative media image abroad. Not only does she survive by managing high-level relationships with Afghanistan and India, but also by grappling with the competing interests of the United States and China.

Ambassador Akbar Ahmed began by saying that tribes, communities and religions in the past have defamed land and neighbors for personal gain.

The conflicts and prejudices between the different religions have always led to further conflicts and mutual denigration. He asked President Arif Alvi to share his thoughts on the roots of such conflicts. 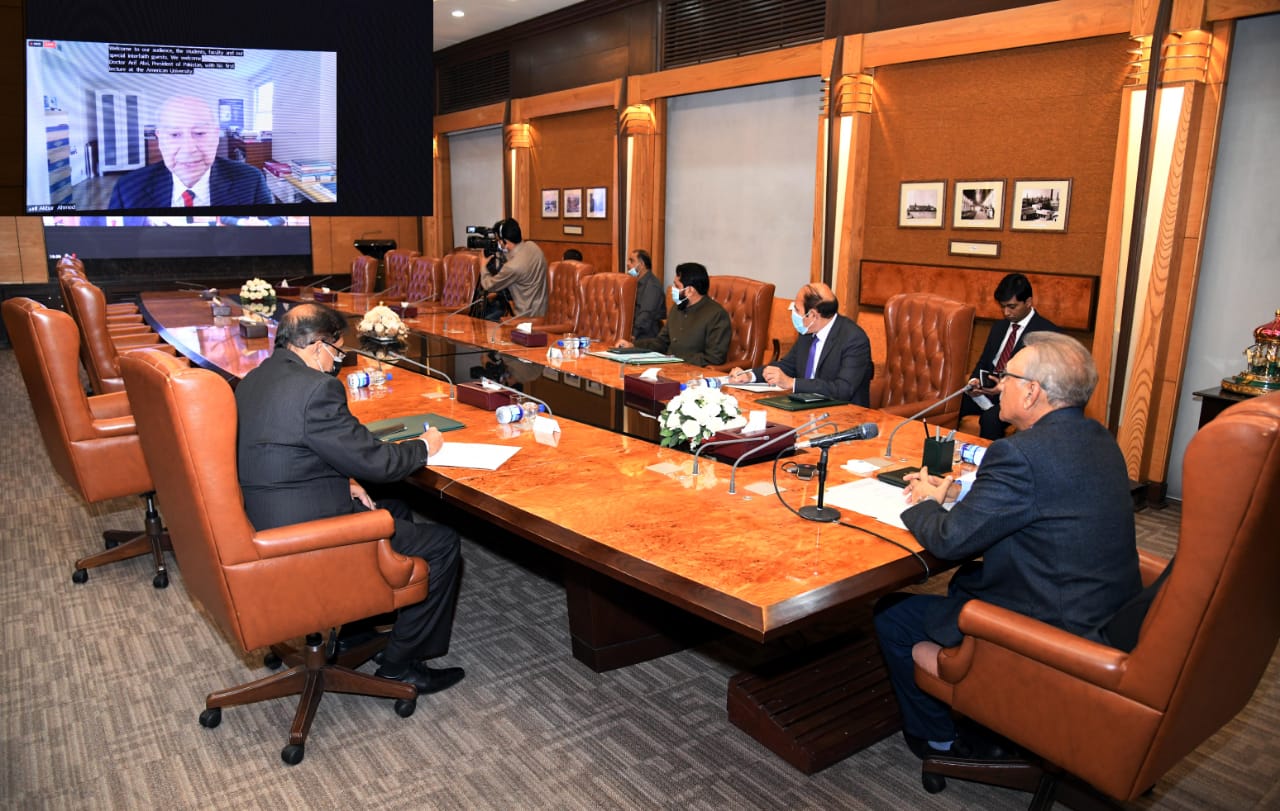 Ambassador Akbar Ahmed asked the Pakistani President how tensions between different religions and communities should be addressed. Mr Arif Alvi said that tensions can be countered by bringing people together. He went on to say that Islam preaches forgiveness. Therefore we should forgive each other for mistakes of the past and learn to live together and think outside the box. He said the world powers were focused on turning hatred into weapons of mass destruction. Religions are abused worldwide for terrorism, attacks and suicide bombings. He said Islam is a peaceful religion and preaches harmony between religions. He went on to say that Pakistan as a nation also propagates Islamic ideals.

Akbar Ahmed said that even intellectuals like Yuval Noah Harari say that humanity is at enormous risk. Nature’s response to COVID shows that humanity is at risk. President Arif Alvi added that all religions preach tolerance. He said we need to rewrite history and the future. He went on to say that there are bigger issues like global warming, fake news propaganda, and COVID that require the world’s attention and careful action. He said that much more cooperation between developed and developing countries is needed in these difficult times.

President Arif Alvi went on to say that Pakistan has a ministry of interfaith harmony, while Quaid-e-Azam also reiterated that Pakistan is home to various religions and communities. While he said that the so-called secular countries like India have implemented various anti-minority laws. He claimed that the world’s political environment encourages and incites hatred by disseminating fake news propaganda against one another. President Alvi cited the United States as an example of a country that spreads fake news about changes in the behavior of countries in the polls. Similarly, India is constantly trying to denigrate Pakistan on social media.

Ambassador Akbar Ahmed asked the Pakistani President, “What is the practical administrative policy of the Pakistani government to ensure harmony between religions?” President Arif Alvi announced that the Pakistani government is acting swiftly and diligently when it comes to discriminatory incidents a minority comes. He cited the incident of a boy who was tortured enough by another boy to deny his God. He said the government acted swiftly against the perpetrator when the media covered the incident. The same is the case with the recent attack on the Hindu temple in Pakistan. He said that those responsible were carefully dealt with. President Alvi said the Pakistani government is negotiating child marriage and forced conversion bills, which are currently the top concerns of Hindus in Pakistan’s Tharparkar region.

Ambassador Akbar Ahmad said Pakistan is a country rich in Sufism. It has many Sufi shrines like that of Baba Bulleh Shah, Sachal Sarmast, Data Ganj Baksh and so on. But they’re not as well known as they should be. He asked President Arif Alvi if it was up to the educational institutions that Pakistan’s history and culture were not highlighted enough to promote its soft image in the West? President Alvi responded by saying that Islam preaches tareeqat, which means brotherhood and Sufi path, and that it teaches Sharia (Islamic law). He said the Prime Minister of Pakistan had taken an initiative to set up a Rahmatul-lil-Alameen Authority. His goal is to make the country and the world known for Islam and the life of the Holy Prophet (saas). It will focus on spreading the true message of Islam in the light of the teachings of the Holy Prophet (saas). Research into Muslim heroes will also begin. President Alvi noted that Prime Minister Imran Khan said that an animated series would be made to introduce our children to Islamic culture.

Finally, Ambassador Akbar Ahmed asked the President what features of Pakistan he wanted to highlight. The latter said that Pakistan is a beautiful country with picturesque views. It has five of the highest mountain peaks in the world. Its imagery attracts tourism. He said Pakistan is a land of deserts, civilizations and tourist attractions. He said Pakistan looks forward to becoming the Central Asian Countries (CARS) trade route. He stressed that Pakistan was looking forward to maintaining peace and stability in Afghanistan.

President Arif Alvi invited tourists from all over the world to visit Pakistan and make memories of the country and its people. He also gave the US a message that the US, as a world power, should play a leading role in maintaining peace in the world. He affirmed that the US should not unlearn its lessons from the past. He said that Sufi and Muslim traditions believe in forgiveness. The US should also forgive each other for past mistakes. It should avoid and discourage fake news, weapons of mass destruction, and AI that spread hatred. The event ended with this great news.

The author is a contributor to the Daily Times and can be reached at raesaf21@gmail.com