Young people rely on social media but don’t trust them

Today’s 15- to 24-year-olds rely on social media and other digital sources to keep up to date, but that doesn’t mean they trust the information they get from them, suggests a new UNICEF Gallup Study before.

In the mix of 21 low, middle and high income countries surveyed for UNICEF’s Changing Childhood project in 2021, young people report that they most often use social media or online news sites to find out about current events on the To stay up to date. A median of 45% of 15- to 24-year-olds say they use social media the most, and another 14% most rely on online news sites.

This is in sharp contrast to the older generations in these countries who are instead turning to television to keep up with current events. People aged 40 and over are generally more likely to rely on traditional media such as radio and newspapers than young people.

Multiple bar charts. 2021 question from the UNICEF Gallup survey, which asks people in 21 countries ages 15 to 24 and 40 and older which of six media sources they use most often to stay up to date on current events – social media, Online news sites, family or friends, radio, television or newspapers. Young adults tend to rely on social media (45%), television (15%), and online news sources (14%) as their primary news source, while those 40 and older tend to rely on television (39%), social media (17%), radio (13th %) and online news sites (11%). Friends or family are mentioned by less than 10% of both groups. Young adults rely much more on social media than their older counterparts, while the older group relies on television much more than the younger ones.

These results come from the Changing Childhood Project, the first international survey to ask different generations about their views about the world and today’s childhood. Between January and June 2021, Gallup conducted the survey for UNICEF and ultimately reached more than 21,000 people ages 15 to 24 and 40 and older in 21 countries. These countries included Africa, Asia, Europe, and North and South America.

Young people trust doctors the most, social media the least for accurate information

On average, less than half (45%) say they trust family and friends very much for accurate information, while at least one in three 15- to 24-year-olds trust other institutions such as international media and national media as much. 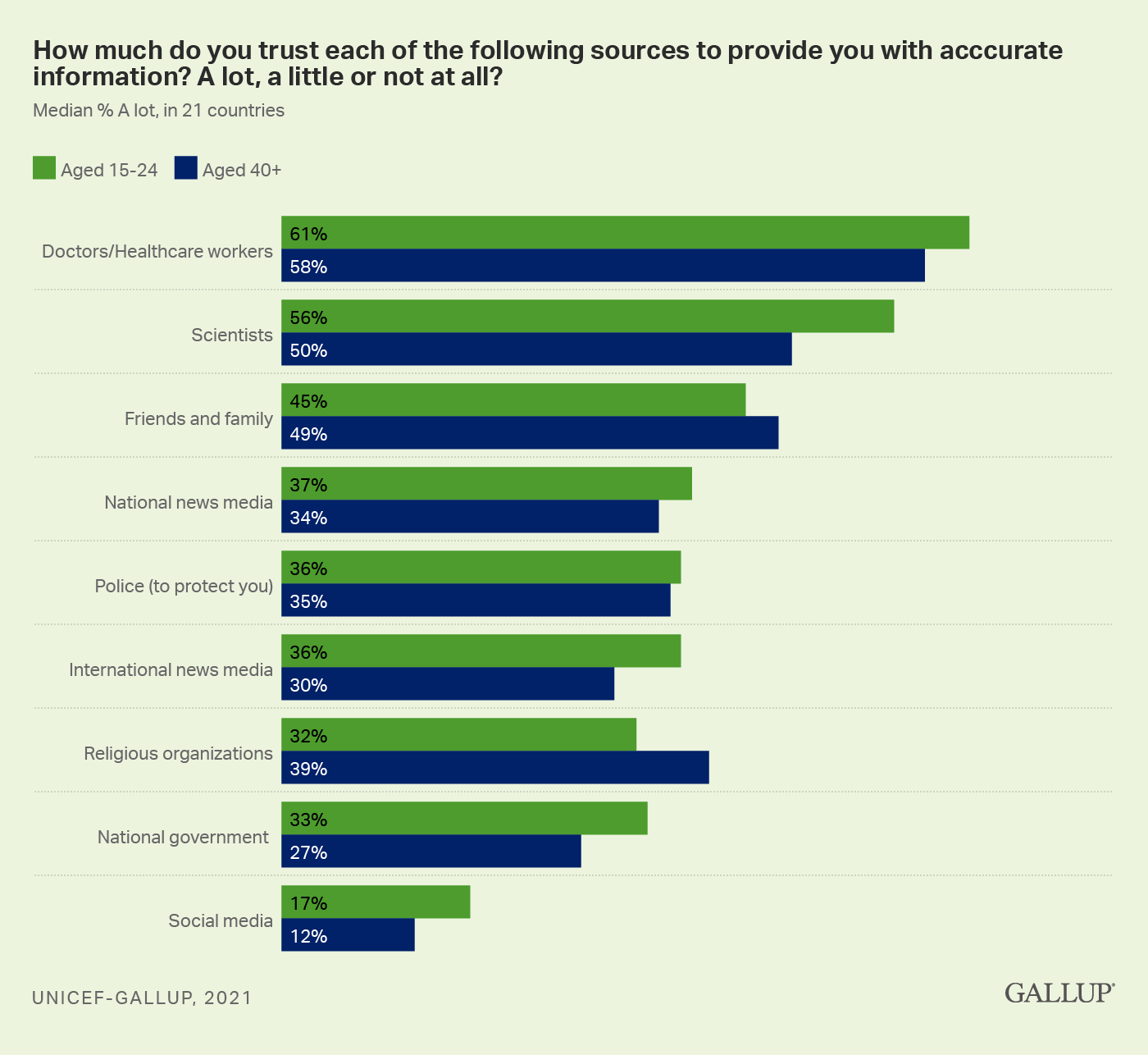 Multiple bar charts. 2021 question from the UNICEF Gallup survey, which asked people in 21 countries, ages 15 to 24 and 40 and over, how much they trust various sources to provide them with accurate information. This includes (in essentially descending order of trust) doctors and medical staff, scientists, friends and family, national news media, police (to protect them), international news media, religious organizations, their national government, and social media. Trust in social media is lowest in both age groups, with 17% of young adults and 12% of older adults saying they trust them “a lot”. The highest levels of trust between the two groups are found in doctors and healthcare workers, with around 6 in 10 of each group saying they trust them a lot. In second place are scientists, who are highly trusted by 56% (younger adults) and 50% (older adults). The biggest differences other than social media and academics are international news media (which 36% of young adults trust “a lot” compared to 30% of older adults), religious organizations (32% “a lot” of young adults), compared to 39% in older adults) and the national government (33% of younger adults trust it a lot, while 27% of older adults do). There are hardly any differences between the groups who trust the police for protection, a little more than a third express a lot of trust.

Although young people rely on social media and online sites to keep them updated on current events, whatever the institutions they are interviewed about, young people are least likely to trust social media platforms to give them accurate information to deliver.

In most institutions, young people are more trusting than older people

Today’s 15- to 24-year-olds grow up in a networked world. The internet has always existed for them – and for the youngest there has also been social media. And in the current climate of misinformation and disinformation, it is becoming increasingly difficult for people of all ages to separate fact from fiction in what they see, read and hear.

Since information – real or fake – shapes the decisions young people make about their lives, it is important to understand which media they use to keep up to date and which institutions they trust most to provide accurate information and protect it .

Read more of the findings from this study.

Julie Ray is a writer and editor at Gallup.

Tags:
Previous Article
96 percent of consumers don’t trust ads. How to sell your product without getting grubby
Next Article
The sad reason deepfakes pose little threat to US politics

Nicholas Goldberg: Don’t turn away from the rising tide of political violence in America
admin January 8, 2023

Nicholas Goldberg: Don’t turn away from the rising tide of political violence in America