With an election looming and misinformation seemingly rife, concerns have been raised over the prospect of misleading political advertising.

Independent federal MP Zali Steggall has proposed legislation to prevent the spreading of falsehoods during federal elections, with her website claiming: “It’s perfectly legal to lie in a political ad.”

She repeated the claim during a television interview on September 17, 2021, arguing that “whilst we have misleading and deceptive legislation to catch advertising that lies about things, we have a free-for-all in political advertising”.

So, is there nothing to prevent people from lying in political advertising?

Ms Steggall’s claim is close to the mark.

Experts consulted by Fact Check said there were no catch-all federal laws to prevent lies in political ads, though they said existing laws might apply in narrow circumstances.

For example, the Commonwealth Electoral Act prohibits misleading political advertising, but only insofar as this affects the vote-casting process.

And while South Australia and the ACT do have laws regulating the content of political ads more generally, they do not cover federal elections.

Consumer law banning deceptive or misleading conduct may apply to some statements on social media but typically does not extend to the political realm.

Neither the national complaints body for advertisers nor the federal communications regulator assess the factual content of political ads.

Social media platforms have adopted a voluntary code to regulate misinformation and disinformation, which, while acknowledging the primacy of Australian laws, also largely excludes material authorised by politicians.

In rare cases, people may be able to sue for harm or defamation in political advertising.

However, experts said pursuing this would fall to individuals and, in the case of defamation, make little difference to claims about policies.

What makes a political ad?

Ms Steggall spoke of “political advertising”, which can be defined broadly.

As Melbourne University’s Professor Sally Young told a 2010 Victorian inquiry, it can encompass advertisements run by governments to explain their programs, as well as ads from lobby groups and private interests such as unions and businesses leaders to influence public opinion and persuade politicians.

However, she said, “the term ‘political advertising’ is most commonly used to refer to the advertisements produced by political parties and individual candidates that are shown during election campaigns in order to persuade voters to vote for them”. 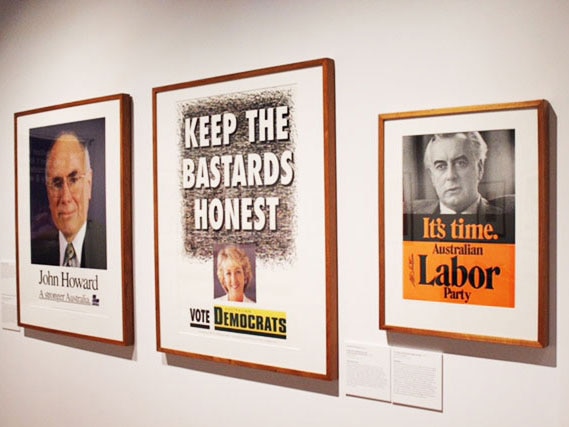 Among other things, Ms Steggall’s bill seeks to ban statements “relating to a matter of fact” that are, or are likely to be, “misleading or deceptive to a material extent”.

This rule would apply to anything that meets the definition of what the Electoral Act calls “electoral matter”.

Broadly, this means any public communications, regardless of author, whose main purpose is to sway electors during a federal election.

This captures not only paid ads but also social media posts, for example.

Graeme Orr, a law professor with the University of Queensland, told Fact Check that a focus on paid advertising alone would be “a little bit insufficient” given that “campaigning these days is done through the sowing of memes”, which are not only spread online — including by bots — but also picked up and spread by supporters in the mainstream press.

While Ms Steggall claimed it was “perfectly legal” to lie in political ads, she also acknowledged that some laws do exist.

South Australia has since 1985 outlawed any electoral advertisement that “contains a statement purporting to be a statement of fact that is inaccurate and misleading to a material extent”.

In 2020, the ACT passed a similar law that came into effect after that year’s election.

Other states have not done so, though Victoria’s electoral matters committee recommended the idea as recently as September 2021.

Importantly, these laws do not apply to federal elections.

As Ms Steggall noted, it is already illegal to lie in ads for goods or services.

Section 18 of the Competition and Consumer Act 2010 states that a person must not “engage in conduct that is misleading or deceptive or is likely to mislead or deceive”.

Accidental or not, the consumer watchdog explains: “If the overall impression left by a business’s advertisement, promotion, quotation, statement or other representation creates a misleading impression in your mind … then the behaviour is likely to breach the law.”

An exception is made for “puffery”, or claims so wildly exaggerated that no-one could seriously believe them.

Luke Beck, an associate professor of constitutional law with Monash University, told a 2019 federal parliamentary committee that these concepts were “well established in Australian law” and “well understood by the courts”, but they did not extend to political ads.

David Bennett, a QC and former Australian solicitor-general, told Fact Check that laws about deceptive conduct “tend to be confined to trade and commerce, and don’t apply outside that”.

And Jeannie Paterson, a consumer law expert with the University of Melbourne, said political communications “definitely are not ‘in trade or commerce’ as required for liability for misleading conduct under the Australian Consumer Law”.

However, she added, social media platforms — themselves being in trade or commerce — could conceivably fall foul of consumer law for allowing a misleading statement to spread.

“They have to know it is false and make a decision to keep the information up,” Professor Paterson said.

“And if they do that, arguably, there is accessorial liability.”

Nevertheless, she said, this was “very much a second order mechanism”.

Ms Steggall described political advertising as a “free-for-all”, although other laws could come into play.

There are defamation laws, for example, which are designed to protect people’s personal reputations (though they do not apply to statements inside Parliament).

However, he added: “Most political debate is about ideas and visions. And if you think about a referendum, none of it is really about personalities.” The leader of the Tasmanian Greens, Cassy O’Connor, says that Tasmania’s political donation laws are the weakest in the country. Is she correct? RMIT ABC Fact Check takes a look.

Dr Beck also told Fact Check: “There is nothing necessarily defamatory about putting out misleading and deceptive political ads.”

Separately, Professor Paterson said individuals may also be able to sue for harm caused by “negligent misrepresentation” in advertising.

She said that normally negligence wouldn’t apply to politicians, but that if a person was harmed — say, by not taking a vaccine — they could take legal action.

But both Dr Beck and Professor Paterson told Fact Check that sanctions for defamation or negligence did not offer a regulatory or systemic fix to misleading political ads.

Rather, they relied on individuals seeking compensation through the courts, which can be a slow and complex process.

So, how are ads regulated?

Australia adopts a self-regulatory system for commercial advertising, whose complaints process is administered by Ad Standards.

This body hears certain complaints about misleading ads, but only where they target children or relate to food and beverages or the environment. Ad Standards’ website explains: “Currently, there is no legal requirement for the content of political advertising to be factually correct.”

What about the communications regulator?

The Australian Communications and Media Authority (ACMA) is responsible for regulating broadcasting and telecommunications in Australia.

But when it comes to political advertising, its rules are not focused on content.

They demand, for example, that all political parties be allowed to air election ads, and that such advertisements cease during the three-day “blackout” period before election day.

The rules also cap the amount of airtime given to ads and cover record-keeping and “authorisations”.

Authorisations refer to the requirement that election ads display details such as the name and address of who is behind them.

Although the authority oversees various codes of practice that require accuracy in news and current affairs, it has previously told Fact Check that the “accuracy of advertisements” does not “fall under the ACMA’s remit”. The Electoral Act contains a limited offence for advertising that misleads voters on how to cast their vote.(ABC News)

Experts told Fact Check there was no broad law that directly addresses the content of political ads.

Such a law existed — briefly — in 1984, after the Hawke government amended the Electoral Act to ban “any electoral advertisement containing a statement: (a) that is untrue; and (b) that is, or is likely to be, misleading or deceptive”.

The amendment was repealed that same year, having never seen an election.

These days, the Australian Electoral Commission (AEC) says it “has no role in regulating the political content of electoral advertising”.

However, it notes, section 329(1) of the act contains a limited offence for electoral advertising that is “likely to mislead or deceive voters about the way in which they must cast their vote”.

Dr Beck said that while this covers lies about the voting process, such as the mechanics of filling in a ballot paper, “this doesn’t stop politicians and others from lying about policies or their opponents”.

When it comes to federal elections, social media is not subject to ACMA’s blackout period for broadcasters, though ads and posts by certain people are now subject to the AEC’s authorisation rules.

Beyond that, there is little regulation of political content.

Rules around misinformation and disinformation are set out in a voluntary code developed by industry group DIGI, which counts Twitter, Facebook and Google among its members. Following the 2019 election, Labor complained of the proliferation political advertising which the party said falsely claimed it planned to introduce a death tax.(Supplied)

As DIGI explains, the code commits signatories to creating “safeguards to protect Australians against harm from online disinformation and misinformation, and adopting a range of scalable measures that reduce its spread and visibility”.

The code acknowledges the primacy of Australian laws, including for electoral advertising, but otherwise largely exempts “political advertising or content authorised by a political party”.

That’s not to say the platforms do nothing to address political ads.

Twitter, for example, has since 2019 banned all paid political ads, arguing that “political message reach should be earned, not bought”.

Facebook has sought to improve identification and transparency, establishing an ad library with details around authorisations and spending.

Neither company typically removes misleading posts, though Twitter is conducting a trial to let Australian users flag misinformation, while Facebook has entered into partnerships with third-party fact-checkers to attach warnings to content and reduce its visibility.

What the experts say

Professor Orr said “there is no general rule about political speech and truth” that applies to advertising.

Dr Bennett, referring to the narrow provisions in the Electoral Act, said that “with one qualification” Ms Steggall was “basically right”.

Professor Paterson told Fact Check that while it was “not a free-for-all” — as some sanctions for misleading ads did exist — Ms Steggall’s statement was “broadly true”.

UNSW Professor of Law George Williams said that in the absence of a national law, “it is possible for parties and candidates to lie in their campaigning without a legal consequence”.

“There are some limits [such as defamation], but they are few and far between.”

Tags:
Previous Article
Rhino President Mark Pinkus: Executive of the Week
Next Article
1. Use of smartphones and social media is common across most emerging economies

The oat milk company has been criticized by artists after it covered street art in Philadelphia with advertisements
admin December 24, 2021

1. Use of smartphones and social media is common across most emerging economies
admin November 13, 2021