Much has been written and spoken about the personality traits of Prime Minister Narendra Modi. Some called him a personality cult, others thought he was a man of self-love and a trick of the light; one of Modi’s early supporters even called him a narcissist. However, this article does not analyze Modi’s personality; Instead, the critical standpoints against him in the limelight allude to the mythization of Modi’s person by the various central government websites.

The “change” of central government websites

The Government of India websites are important windows outfitted with specific details of various ministries, departments and agencies to provide information to their users. Can these websites be used to promote political party achievements? Since the Modi government came to power, these websites have gradually evolved from a public source of information to an exercise in self-aggrandizement by the ruling party. 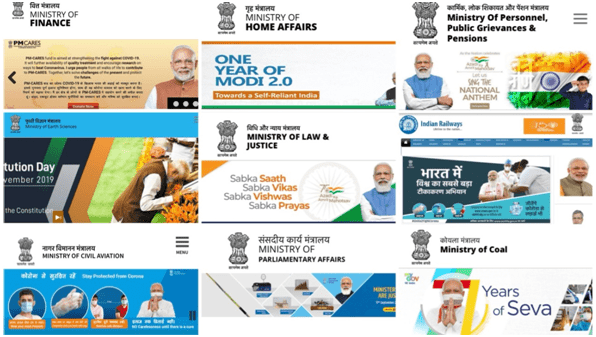 Source: Images from various portals of the central ministries.

There is a clear pattern in the header and footer areas of these websites. The header mostly shows various achievements of the Modi government such as India’s fight against the coronavirus, Azadi ka Amrit Mahotsav, celebrations for International Yoga Day, etc., each accompanied by an omnipresent image of Modi. The footer is mainly filled with various logos from initiatives like Make in India, Transforming India, Swachh Bharat Abhiyan, etc. A haphazard look at 53 different ministries’ websites revealed that 52 of them were filled with advertisements for initiatives that are irrelevant to the purpose of the ministries in which they appear.

This gives the impression that the prime minister is of much greater importance than any minister designated for the primary ministries. The Department of Defense website is the only exception where no such advertisements have been found and surprisingly, Defense Minister Rajnath Singh’s face replaced that of Modi. Even top offices like NITI Aayog, TRAI, Cabinet Secretariat had such advertisements on their websites. Similar advertisements adorn the websites of the state governments of BJP-ruled states such as Manipur, Gujarat and Uttar Pradesh. The individual identities of these governments seem overshadowed and merged into the monolith that is Narendra Modi himself. These websites are managed by the National Computer Science Center (NIC).

In one of the most recent cases, the Supreme Court objected to the inclusion of the Azadi ka Amrit Mahotsav complaint, along with PM Modi’s picture, in emails sent to lawyers by the Supreme Court Registry. When the top court appealed, NIC later had to remove this image from the footer of the emails. Although there is a clear demarcation between the legislature and the judiciary, such cases blur the line between these two authorities and ultimately corrupt the independence of the latter. Similarly, India’s electoral commission had to instruct the center to remove PM Modi’s photos and initiatives for violating the code of conduct prior to several state elections in 2017 and the 2019 Lok Sabha election.

How long would the BJP propaganda work?

A thought leader in propaganda, the BJP government is making effective use of its digital platforms and social media to cement its power and achieve widespread hegemony. Your accumulated ad spend far exceeds that of any other party. While it is not uncommon for a political party to use virtual media to connect with voters when the state apparatus (including government portals) is used to beautify the prime minister’s image, it tends to weaken such institutions and is unethical, to say the least. The use of PM Modi’s image on Covid-19 vaccination certificates attracted various criticisms. Just like its image on gas station hoarding, India’s electoral commission has drawn sharp criticism. Recently, Modi’s picture was even found on advertisements for private companies, which was criticized by Rajya Sabha. In 2016, after the surgical strike in Uri, Uttar Pradesh, the BJP put Modi’s face on several billboards as if it were reducing the army’s success to the personal competence of Prime Minister Modi. Even Joseph Goebbels would have been ashamed if he were still alive today.

In such cases, the question arises, is mass propaganda making real change?

Perhaps so, as Pradeep Chhibber and Rahul Verma argue in an article that the clear ideological consolidation that took place in the 2014 Lok Sabha election was largely due to the inability of Congress to convey the effects of its welfare programs to the masses during these Gap of modes. who set himself up as the people’s choice. No wonder that the huge electoral success of the BJP was called the “Modi wave”. The BJP is effectively using Modi’s face to mobilize votes while at the same time running its propaganda machinery to convince the masses of Modi’s invaluable contribution to the nation, which Congress could not. 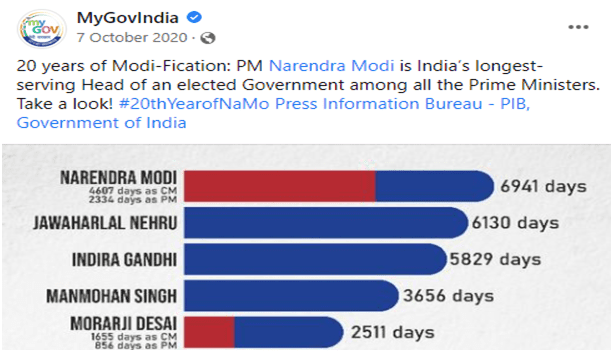 As the first wave of the coronavirus pandemic devastated the country, the official Facebook page of MyGovIndia, the government portal of India, posted a post on October 7, 2020 praising Prime Minister Modi’s achievements as Prime Minister of India. The post even celebrated Modi’s longevity as Chief Minister of Gujrat, comparing him to previous Prime Ministers of India. In fact, the post was just a congratulations from Narendra Modi, who has held in power for so long.

The BJP government has marketed its policies by targeting citizens who are consuming advertising. Above all, she shaped the “Modi figure” as a brand manager. The psychologists Mark Snyder and Kenneth G. DeBono argue that “product advertising groups” attract their target group with different means of persuasion. Image-oriented advertisements play an important role in this. It usually tries to create very eye-catching ads in their visual appeal to the audience; They mainly focus on finer details such as expression, shape and color, rather than the quality of the product. It primarily focuses on the image of the product, which scientists call the soft sell approach to the market.

Similarly, even the BJP is using this soft-sell approach, treating Modi as a brand to attract the masses. For example, let’s say the image of Modi with his hands clasped with a slogan “SabkaSath, Sabka Vikas, Sabka Vishwas aur SabkaPrayas” ultimately creates a mass perception of him as a trustworthy leader with certainty of people’s reliability. In another ad, however, in which Modi is shown with a praying gesture in a slogan as 7 years of seva, an image emerges of him as a selfless servant of a nation that has worked far better for the country than his predecessors. Although the country is in a serious constitutional crisis, advertisements portray the leader of the strong man as a celebration of Constitution Day. His critics are right in calling him a “narcissist” or a “man in self-love”, but the BJP is successfully using all of his narcissism as a form of advertising on a larger scale. The serious threat is that Modi advertising has subsumed hate politics in society. It is a neoliberal phenomenon in which a populist leader has been turned into a consumer product.

BJP is an expert on tactics for connecting with people in order to maximize votes, and the “modification” of government portals is just a symptom of the greater political manipulation at work. There are 12,016 government website services listed, and soon these too could become nothing more than platforms for spreading pro-BJP propaganda. Not sure when this ‘modification’ of government websites will end, but a quote from Michael Lonsdale from the film Munich gets to the heart of the dire truth – “The race is not for the fast, nor the fight for the Strong but “time and chance happens to all of them. The hand of fate falls suddenly, who can tell when it will fall. “

Jayant Pankaj is a resident of Assam. He recently completed his Masters in Political Science from the University of Hyderabad. He can be reached at vjayantkumar024@gmail.com

How Strings Were Pulled to Lift The Jute Price Cap, with Bengal BJP Trying to Sew Up Its Fraying Unity
admin May 20, 2022

How Strings Were Pulled to Lift The Jute Price Cap, with Bengal BJP Trying to Sew Up Its Fraying Unity