Alabama redistricting: Is there a better way to draw political maps?

Lack of racial polarization data. Public hearings scheduled during work hours. A goal of protecting political incumbents. Maps held secret until a lawmaker first introduced them to the public on his Twitter account.

Those were just some of the complaints raised within the past week by Democrats, some Republicans, and a coalition of civil rights organizations on Alabama’s latest redistricting effort. The focus of their frustrations zeroed in on the Legislature’s responsibilities of drawing the maps for statehouse, congressional and board of education seats for the next 10 years.

The maps are almost certainly headed to court, and groups are pondering: Is there a better way to do this?

According to reformers and political scientists who analyze redistricting in the U.S., the answer is “Yes.”

“We need independent redistricting commissions,” said Felicia Scalzetti, Redistricting Fellow representing The Ordinary People Society and Alabama Election Protection Network. “Politicians should not be picking their voters. Our communities are not being represented correctly.”

In this Oct. 6, 2020 file photo, redistricting reform advocate Brian Cannon poses with some of his yard signs and bumper stickers in his office in Richmond, Va. A new voter-approved commission in Ohio that was supposed to reduce partisanship in the once-a-decade process of political map-drawing has already become a flop. Similar commissions meeting for the first time in New York and Virginia have devolved into partisan finger-pointing, undermining their intent. (AP Photo/Steve Helber, File)AP

The fallout from the special legislative session could spark a push for redistricting reform in Alabama. But even those who support reform readily admit that the chances to adopt anything before 2030 is remote.

Movement has been afoot nationwide for reforms. Arizona and California, though citizen-driven initiatives, adopted independent commissions before the 2010 redistricting cycle. Colorado, Michigan, Ohio, New York, Missouri, Virginia, and Utah have adopted changes within the past 10 years.

Few states in the GOP-dominated Deep South handle the redistricting process away from the legislative chamber. Arkansas has a three-member commission that oversees redistricting, but it consists of the governor, secretary of state and attorney general. All three are currently Republican.

As defined by the Brennan Center for Justice, the three main alternatives to the Legislature’s authority in redistricting include:

State Rep. Chris Pringle, R-Mobile, and co-chairman of the Alabama Legislature’s Redistricting Commission who oversaw the new maps drawn for Alabama House seats, said he does not think the alternatives produce any better outcome than the status quo.

He added, “You tell me how to take politics out of a political process and you’ll be a brilliant man.”

In Iowa, the redistricting process is viewed as nonpartisan and fair. Political pundits call it the “The Iowa Way,” and praise redistricting in Hawkeye State for creating a system that is relatively independent from partisan shenanigans that dominate processes elsewhere.

One of the advantages to the Iowa system is that the LSA does not take incumbency into consideration when drawing up the congressional and legislative maps.

As one retiring Iowa lawmaker recently told the media, “It’s good to rotate the crops.”

Iowa’s LSA is required to only take two factors into consideration when drawing the maps for congressional districts: County boundaries and population.

“Having legislators with experience is good but shaking things up a bit every 10 years also has its advantages,” said Timothy Hagle, a professor of political sciences at the University of Iowa. “We usually have incumbents who are put together in proposed districts. This could result in incumbent versus incumbent races in the general election, or primary fights among incumbents. Some incumbents retire or move to retain their districts. Others fight it out. On the whole, we see this as a good system.”

But does it produce more competitive districts? Donna Hoffman, a professor of political sciences at the University of Northern Iowa, has studied the competitiveness of Iowa’s races with states where the legislatures oversee redistricting. Her conclusion: There was no difference in the margin of victory between districts drawn through the legislative process compared to districts drawn by independent commissions. Hoffman considers Iowa to be an independent commission, rather than an advisory commission as defined by the Brennan Center for Justice and other organizations.

Redistricting reforms should not be considered the “cure-all for non-competitive elections,” Hoffman said in an analysis of Iowa’s redistricting process that she co-authored with a university colleague.

That said, she said the Iowa system deserves the praise it gets.

“Iowans of all stripes consider the process fair,” Hoffman said. “When input meetings were held … on the first map in September, most of the comments from citizens were supportive of the maps precisely because they think the process is fair and nonpartisan.” 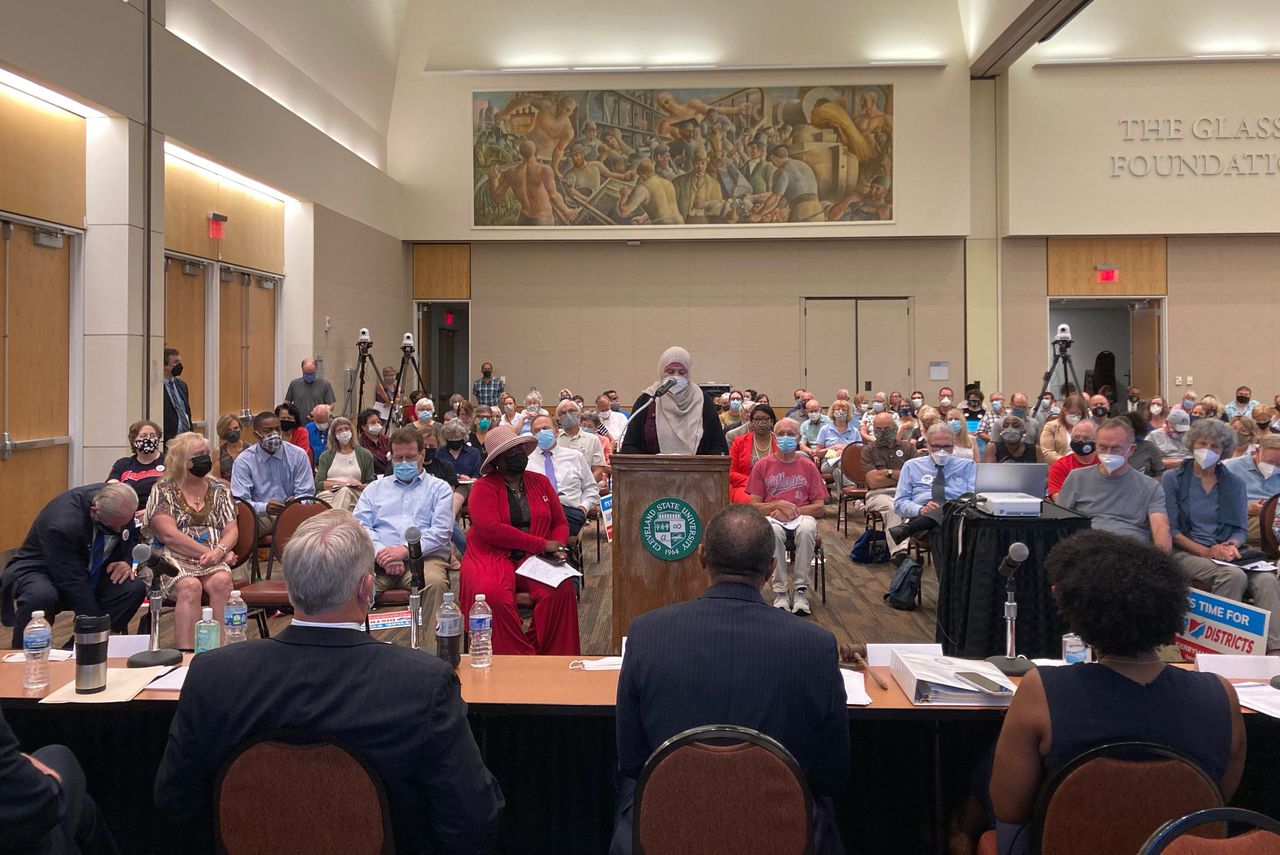 In this Aug. 23, 2021 file photo, Areeqe Hammad, of Cleveland, testifies at the first public hearing of the Ohio Redistricting Commission at Cleveland State University in Cleveland. A new voter-approved commission in Ohio that was supposed to reduce partisanship in the once-a-decade process of political map-drawing has already become a flop. Similar commissions meeting for the first time in New York and Virginia have devolved into partisan finger-pointing, undermining their intent. (AP Photo/Julie Carr Smyth, File)AP

Some states are experiencing growing pains in their redistricting reforms.

Ohio voters in 2015, supported an amendment to reform its redistricting process by creating the Ohio Redistricting Commission. The group consists of political appointees from four legislative leaders – the Senate President and Speaker of the House, and the two minority leaders — along with the governor, secretary of state and attorney general.

But the GOP-dominated group blew its October 31 deadline to get its maps approved, opting to place the process in the hands of the Republican-controlled Legislature.

David Niven, a political science professor at the University of Cincinnati, said the hope was that the commission would produce something that looked like a fair map because new redistricting rules limited the splitting of cities and counties, and prohibits favoritism shown toward a political party.

He said that if the commission was unable to produce a map that members from both parties supported, then the map would only be in effect for four years.

“So far, the process has produced very partisan maps,” said Niven, adding that the Ohio State Supreme Court will have the final say.

In Michigan, for decades, Republicans in charge of redistricting redrew maps that included extreme partisan gerrymandering leading to court challenges and eventually to a citizen-ballot initiative that was approved by 61% of voters to create an independent commission.

The commission consists of 13 non-partisan volunteer citizens, who are “randomly selected with some screening, kind of like how we select juries,” according to Jon Eguia, a professor of political sciences at Michigan State University. Four are identified at Republican, four as Democrats and five as “neither,” Eguia said.

“The clear improvement is that this is a transparent process with lots of opportunity for feedback,” said Eguia, who has written a report on Michigan redistricting. Meetings are broadcast live on YouTube, and the public can watch how the maps are drawn, he added.

“And after they drew their first proposed maps, they paraded them across the state in public hearings,” Eguia said. “The public did not like the maps and express rather critical comments. So now they are revising these much-derided maps, and starting November 15, they will go on more public hearings on the revised maps that take into account those critical comments.”

He said the previous process led by the Legislature was conducted in closed doors and, like Alabama’s current process, the maps were not released publicly until the legislative process was well under way.

But challenges to the commission could be forthcoming. NBC News, in a report last week, illustrated efforts by political parties to influence the commission as it moves forward with its work.

Eguia said that any change in Alabama would require soul-searching: Are Alabamians happy with the current system? Do they trust politicians or “regular people” to handle the process?

“In Michigan, citizens were not happy,” said Eguia. “And it’s not just about parties: We had some really nasty districts, sprawling with odd shapes so that it was hard to reach out to your representative who might live seemingly halfway across the state. Districts did not represent meaningful communities. So, citizens of both parties voted for a new system.

Any changes in Alabama will face an uphill climb and any change would likely need to occur in a courtroom.

Most of the states that adopted commissions within the past decade have done so through citizen-driven ballot initiatives like Michigan. Alabama, along with 26 other states in the U.S., has no option for ballot measures pushed by the citizens.

“When a state moves to an independent (redistricting) commission, it’s due to an initiative process,” said Charles Bullock, a political science professor at the University of Georgia and a longtime scholar of Southern politics. “Most Southern states don’t have that. Legislators, themselves, don’t see much value in giving away their power.”

He added, “I could imagine a scenario in which a majority party sees its power is slipping away might then pass legislation creating an independent commission. But in a state like Alabama, I don’t think it’s happening anytime soon.”

Hoffman, the professor at the University of Northern Iowa, said she believes it will be difficult for states with legislatures under unified partisan control to adopt an Iowa-like system in an age of hyperpartisanship.

“A party may hesitate to support it, always hoping to be in control in the next cycle,” she said.

Jess Brown, a retired professor of political science at Athens State University and a longtime observer of Alabama state politics, said that if a push for redistricting outside the Legislature ever gets “serious attention in Alabama in my lifetime, my knees will buckle.”

Alabama’s Democratic minority may support an outside commission, but lawmakers admit its creation will have to happen outside the legislative branch. Alabama House Majority Leader Anthony Daniels, D-Huntsville, a supporter of an independent redistricting commission, said he hopes changes will “come through the courts.”

Some Alabama Republicans have been disappointed with the redistricting process as well, saying the final maps — more than anything else — protected incumbents. Also, some party stalwarts are frustrated over boundary shifts that — in cases like the city of Spanish Fort — led to previous Republican strongholds gobbled up by Democratic representation.

For now, political observers do not believe there is an incentive for changes in Alabama because one political party dominate elected office.

“The Republicans are not walking in to say, ‘We are going to appoint an independent commission to draw boundary lines that may take us out of office,’” said Jon Gray, a Republican Party strategist based in Mobile. “Why would do that?”

Quin Hillyer, a Mobile-based political writer and senior commentary editor for the Washington Examiner, said while he believes Pringle did “a masterful job in leading redistricting this year,” he generally supports the concept of an independent redistricting commission. That said, he believes some states create commissions that are “as partisan and unfair as some legislatures,” with the commission arrangements serving as a “smoke-screen” for one-party control.

“That actual design of the commission makes all the difference, and that sometimes it’s best just to leave the partisanship out in the open, with elected lawmakers taking the heat,” Hillyer said.

Kathy Jones, the president of the League of Women Voters of Alabama, said that any meaningful change in Alabama will have to come from the Legislature agreeing to put the issue before voters because of the lack of a citizen-driven initiative process.

She said the League supports the creation of a commission to handle the process going forward.

“That’s a problem we got with issue after issue in Alabama,” she said. “The citizens have no voice in proposing changes to the laws in Alabama.”

Tags:
Previous Article
Political advertising can lie and unfortunately there is no getting around it
Next Article
Keys to media literacy in combating violence that children face