Writing a book about Scott Morrison: “The fact that he looked boring was not an obstacle” | Sean Kelly

IIn 2018, I was asked to write a profile of Scott Morrison, the new Prime Minister. I read everything I could and talked to as many people as they wanted to talk to me. Then I started to cut and paste snippets into folders on my computer: “Immigration”, “Religion”, “Ambition”, “Mr Average”.

I stared at these facts for a long time. Politicians are very often cataloged according to their beliefs. That makes sense: it’s probably the most important thing about them. In Morrison’s case, it was hard to say what to say. Over a period of decades he had said little definite; if he had made clear statements, he had undermined them elsewhere. His language tended to be general, so it was difficult to take anything clear away.

After all, I had one of those moments that every writer hopes for, when you realize that what you thought was blocking your way is actually what you’ve been looking for all along. This apparent lack of definition was the defining feature of Morrison’s public life. The profile was published under the title Leave No Trace.

I thought this was it for me and Morrison – and when a publisher asked me if I should write a biography, I wasn’t thrilled. The man wasn’t that interesting, and I wasn’t convinced I could keep a whole book about him.

But then I had a similar revelation. The fact that it looked boring wasn’t an obstacle: it was the opening. Here was a man who was on display all the time, but we knew so little about him – and nobody seemed to want to know more. And he had become prime minister! How did he do this trick?

Of course, nobody can completely avoid leaving their mark. To write this book, I looked carefully at everything Morrison said and did in public life for decades. Since he hadn’t done much, it meant examining exactly what he had said: the gaps, the contradictions, the baffling twists, the patterns.

This scrutiny is exactly what Morrison doesn’t want.

The resulting book is not a straightforward biography. At times my approach was closer to literary criticism than political journalism. If that sounds strange, keep in mind that for most of us, politicians are not that different from characters in books. What do we know about them other than what the people tell us who compose the news we see and hear and who write the articles we read?

Too many in the media are too willing to treat politics as a game, with political cleverness being admired more than substance

Although I doubt Morrison would put it that way, he understands it better than any politician in the country. When there was the first hint in 2015 that he could become Prime Minister, he set about creating a very simple character: Sco-Mo, who makes curries once a week and likes footy. In other words, he knew that the journalists who wrote his life story would need material and set about making it available. He also gave them other elements: He was pragmatic and – that now seems almost implausible – “authentic”. That was more or less enough to win an election.

This had another implication. If every politician is like a character from a book, then journalists are the collective authors of that book. Any investigation into the character Morrison had created had to scrutinize the journalistic habits that made his success possible. The notion of objectivity is important, but it is often used as an excuse to repeat what politicians say without criticism. Too many in the media are too willing to treat politics as a game, with political cleverness being admired more than substance.

On the way, I considered writing another type of book. Every author does that. Behind every book that is written, as behind every life that is lived, there are ghosts of things that could have been but ultimately weren’t.

For a long time I thought the aim of the book was to discover the “real” man behind the performance. Over time, I decided that this was sort of a search for some sort of alibi for Morrison, as if what he’d done in public didn’t matter. Hadn’t Morrison been visible to us for some time, if you were willing to pay attention?

What could dramatically change the way we feel about him as prime minister at this stage? That he was friendly in private? Or, alternatively, what could we learn if we discover, for example, that he had a secret religious belief that the climate crisis was not a factor? What would that change?

Establishing facts is important. But, as Eve Sedgwick argued decades ago, the hunt for the hidden story can sometimes distract us from seeing what lies ahead. 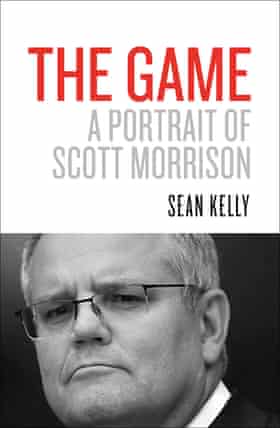 Although I ultimately did not write that other book, looking at such questions gave me the final element of this book. If many of us weren’t ready to take a close look at Morrison, why then? That tells us something about Morrison, but doesn’t it also tell us something about ourselves? He fought his way to the top of some of Australia’s most powerful institutions. Then he convinced many Australians to vote for him. Why were so many of us willing to accept the stories he was telling us and the image he was presenting?

If we look closely at how Scott Morrison succeeded – and how he failed – we can say a lot about politics, journalism and Australians. Whether most of us want to know these things is questionable. So much of Morrison’s career – the character he created, his practice of avoiding scrutiny – is based on the knowledge that most of the time we don’t.

The Game – A Portrait of Scott Morrison by Sean Kelly (Black Inc. Books) is out now