Not everyone in advanced countries uses social media Despite the seeming ubiquity of social media platforms like Facebook and Twitter, many in Europe, the US, Canada, Australia, and Japan do not report visiting social media sites regularly. But the majority in all 14 countries surveyed say they at least use the Internet. 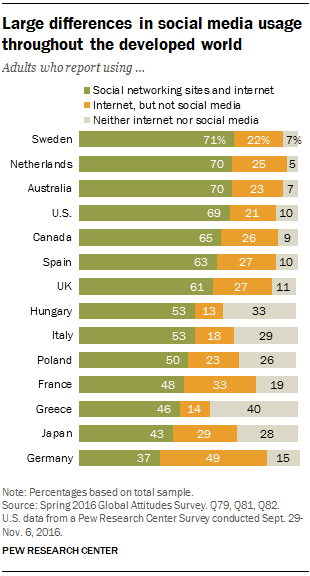 Social media use is relatively common among people in Sweden, the Netherlands, Australia and the United States. Around seven in ten say they use social networks such as Facebook and Twitter, but there still remains a significant minority of the population in these countries (around 30%) who are non-users.

At the other end of the spectrum, in France, only 48% say they use social networks. In Greece (46%), Japan (43%) and Germany (37%) this number is even lower. In Germany, this means that more than half of internet users state that they do not use social media.

The differences in reported social media use across the 14 countries are partly due to whether people use the internet, as low internet access rates limit potential audiences on social media. While less than one in ten Dutch (5%), Swedes (7%) and Australians (7%) neither access the Internet nor have a smartphone, the figure is 40% in Greece, 33% in Hungary and 29% in Italy. 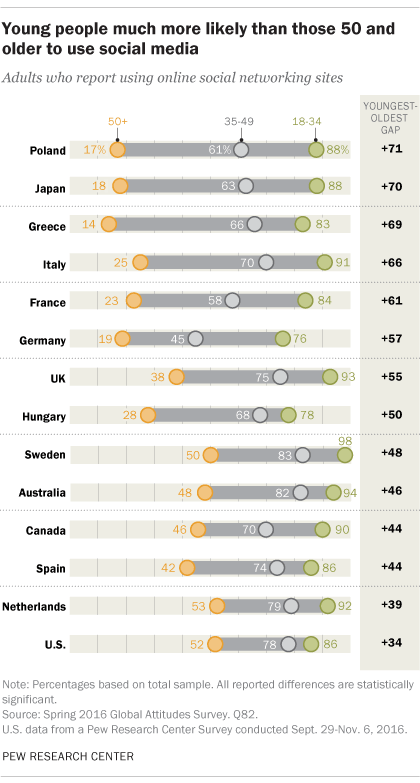 However, internet access does not guarantee the use of social media. In Germany, for example, 85% of adults are online, but less than half of this group reports on Facebook, Twitter or Xing. A similar pattern can be seen in some of the other developed countries surveyed, including Japan and France, where social media use is low relative to overall internet penetration.

In the 14 countries surveyed, a median of 57% indicated that they visit social media sites such as Facebook, Twitter and other country-specific sites (a full list can be found in the appendix). However, the use of social media is not equally widespread in every country. In general, those who are younger, more educated, and richer tend to be more likely to report on social media, even among internet users.

The age difference in the use of social media between the 18- to 34-year-olds and the over 50-year-olds is significant in all the countries examined. For example, 88% of Polish millennials report using social networks compared to only 17% of Poles aged 50 and older, a difference of 71 percentage points.

Note: Here you can find the main results of our survey, a list of examples of smartphones and social networks used in each country and the methodology.

Jacob Poushter is an Associate Director with a focus on global attitudes at the Pew Research Center.

Tags:
Previous Article
5 things to do for Media Literacy Week – MEDIA LITERACY
Next Article
How the public views COVID-19 vaccines on Twitter in the United States

How the public views COVID-19 vaccines on Twitter in the United States
admin October 25, 2021