A new study published on the medRxiv * preprint server examines public attitudes towards the vaccines used to fight coronavirus disease 2019 (COVID-19) in the United States of America using the popular social media platform Twitter America were developed. The researchers found that the discussion about the COVID-19 vaccines varied with the stage of development of the vaccine and the stage of the pandemic, which in turn varied with the geographic location and demographics of the Twitter user.

COVID-19, caused by the Severe Acute Respiratory Syndrome Coronavirus 2 (SARS-CoV-2), has caused over 4.9 million deaths worldwide, of which over 700,000 lived in the United States. Worst hit by COVID-19 mortality have been the frail, elderly, blacks and Hispanics. In order to stop virus transmission, vaccine development has been accelerated, with this project being given high priority.

The vaccine development process culminated in the emergency approval of COVID-19 vaccines in late 2020, within a year when the COVID-19 pandemic began. Scientists have estimated that at least 70% of the population must be vaccinated to achieve population immunity; In order to achieve this goal, however, the acceptance of the vaccines must be high.

Unfortunately, from April to December 2020, the likelihood of a particular person taking the vaccine dropped from about 75% to about 55%. The benefits and limitations of the vaccine development process, potential dangers of the vaccine, as well as alleged false reports behind the dissemination of vaccine information, sparked extensive discussions about the vaccine.

The current study discusses the public debate on the COVID-19 vaccine in order to capture public opinion on the issue. Social media is a wealth of information that accurately reflects public opinion on a wide variety of topics.

The researchers used DeepFace, a computer vision technique, to study the demographics of Twitter users who tweeted about COVID-19 vaccines. First, the total number of tweets from March 5, 2020 to January 31, 2021 was calculated.

The number of these tweets remained stable, with the exception of two spikes on November 9, 2020 when Pfizer announced that its vaccine was expected to be up to 90% effective, and Covid19 cases on the 8th.

The researchers found that the Twitter users who actively discussed the COVID-19 vaccines were from the states to the east, west and south of the country. This includes California with over 390 users citing the vaccines per 100,000 people, followed by Washington with 370 and Texas with 362 users per 100,000. However, the average number of tweets related to the vaccine per Twitter user did not vary from state to state.

Of about 4.5 million tweets mentioning COVID-19 vaccines in the US, over a third were positive about the vaccines, a third were negative, and the rest were neutral. When examined over time, the researchers found that the sentiment score, positive or negative, varied significantly from week to week at the start of the pandemic, but then became stable.

Further analysis of these trends showed that the issues during the first (positive) peak were the evolution of COVID-19 vaccines mentioned in more than half of the tweets and the availability of vaccines for everyone with 31% as well as vaccine control COVID-19 in almost a fifth. Half of the tweets in the second period were about Black Lives Matter and the vaccine, with about a quarter mentioning the “Bad COVID-19 Pandemic” and “COVID-19 Vaccine Availability” respectively.

The average sentiment of tweets mentioning the vaccines varied from state to state. In general, East Coast states like Maine and New York had higher values ​​at 0.025 and 0.026, respectively, but were low in West Coast Oregon and Colorado at -0.014 and -0.017, respectively. 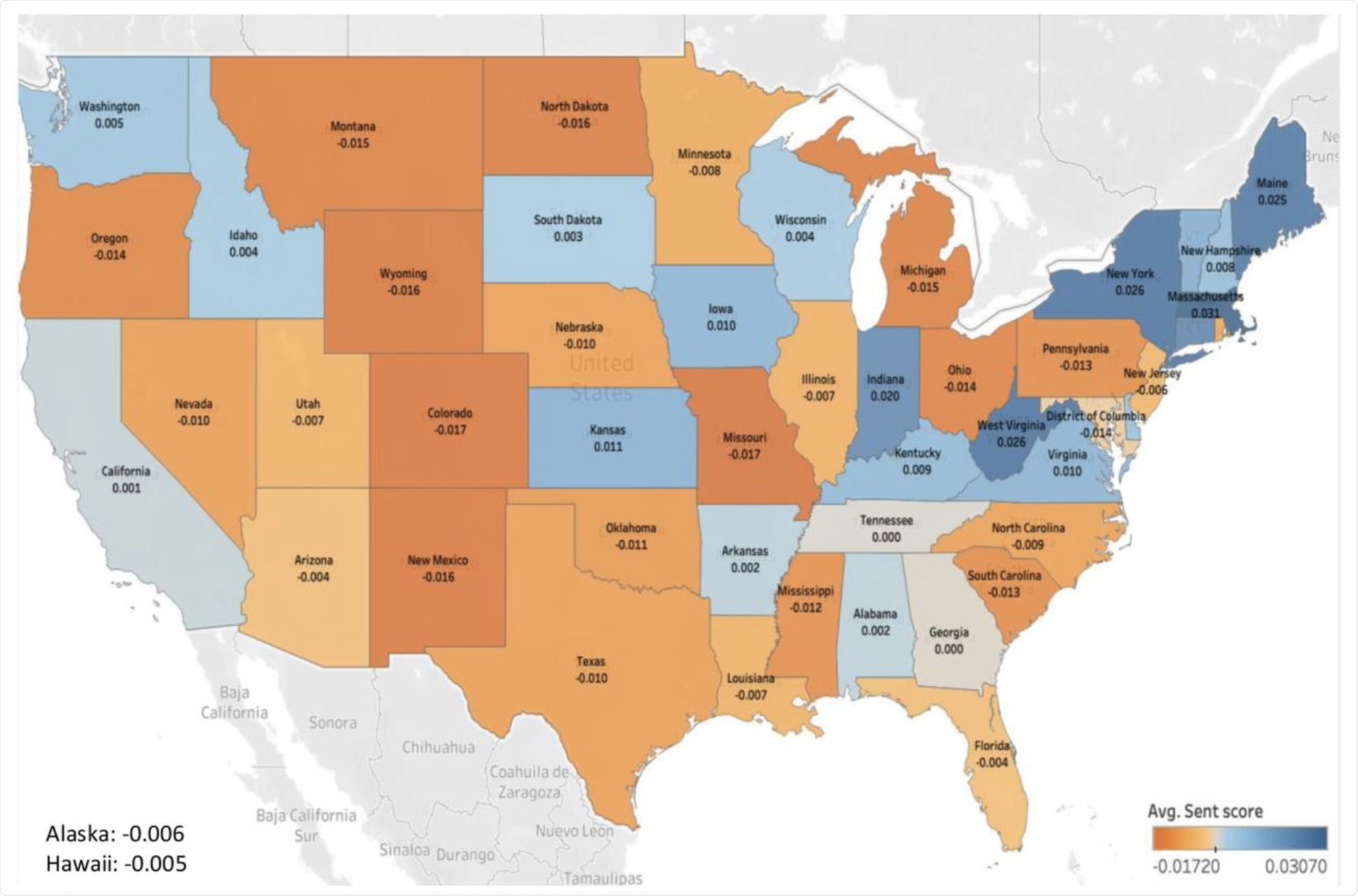 Of the more than 1.1 million Twitter users who tweeted about COVID-19 vaccines in the USA, the authors obtained around 59,000 valid images from the user profiles and classified them using the DeepFace algorithm. The male users outnumbered the female users by 2: 1.

Over 66% of these users were between 30 and 49 years old, with just under 35% in the age group of 25 to 29 year olds. Nearly two-thirds of these users were white, with only about one in seven being either black or Asian and another 17% of other races.

Overall, about 44% of users had a positive perception of the vaccine; however, a third saw it as negative and more than one in five were neutral about the vaccine. Racial or age-related characteristics did not affect the type of perception or the gender of the person.

The researchers found that COVID-19 vaccines became a hotly debated topic in the US on Twitter, with the trend increasing longitudinally. The greatest impetus for the discussion of this topic was the course of the pandemic in this country and the development of new vaccines. The latter factor was of greater interest to Twitter users in coastal states, with those from east coast states tending to be the least likely to accept the vaccine.

COVID-19 vaccines were the subject of more tweets among men aged 30 to 49. While the proportion of whites among Twitter users who discussed the vaccine reflects the actual proportion of the general Twitter user population, blacks and Asians were in this area compared to their general proportions at around 6% and 9% versus 14 % less represented. and 18%, respectively.

The timing of the two highest sentiment ratings, both positive and negative, coincided with the development of the vaccine and the number of COVID-19 cases of over 15 million.

While these numbers corroborate those of most previous studies, one study showed that the weekly trend of vaccine-related tweets remained positive but increased over time. This difference may be due to the use of different keywords and different geographic boundaries.

The recognition that whites and men in one age group talk about this topic more often is a focus for targeted information campaigns to increase confidence in the vaccine. The use of Twitter also provides a broad picture of the vaccine discussions in the US

medRxiv publishes preliminary scientific reports that are not peer-reviewed and therefore should not be considered conclusive, that guide clinical practice / health-related behavior or are treated as established information.

Canadians’ use of the Internet and digital technologies before and during the COVID-19 pandemic
admin May 4, 2022

Cases of severe acute hepatitis of unknown origin in children are unrelated to COVID-19 vaccines; an adenovirus infection is the most likely hypothesis so far
admin April 29, 2022

Cases of severe acute hepatitis of unknown origin in children are unrelated to COVID-19 vaccines; an adenovirus infection is the most likely hypothesis so far