When then-Governor Rick Scott held the reigns of the state of Florida, the even-tempered and soft-spoken Scott avoided controversy and never really used sharp, descriptive terms when attacking his political opponents.

Now that he has joined the ranks in the U.S. Congress, Sen. Scott has been unleashed.

Since becoming a sitting U.S. Senator, Sen. Scott has torn into Democrats on a daily basis, calling them every name in the political book.

It’s politics, and in Congress, Scott needs to compete with 99 other Senators and 435 House members for media attention.

In Florida, Scott has to compete with fellow Republicans Sen. Marco Rubio and the likes of Reps. Byron Donalds, Brian Mast, and Kat Cammack.

With all that said, after the Biden Administration called for the FBI to look into parents who questioned school board authority and teaching practices, Scott equated President Biden to “systemic socialism.”

In addition, Scott has also gone as far as to question Biden’s mental capacity.

“After the disastrous events in Afghanistan, we must confront a serious question: Is Joe Biden capable of discharging the duties of his office or has time come to exercise the provisions of the 25th Amendment?” tweeted Scott.

Scott is right, and most Americans paying attention can plainly see that Biden has not only lost a step or two but appears to have lost an entire flight of stairs. READ MORE

—U.S. Rep. Stephanie Murphy-My bipartisan bill to counter China’s efforts in Latin America and the Caribbean recently passed the House. Glad to see the U.S. taking steps to expand our own presence and influence in this critical region.

—US Rep Kathy Castor-Florida is the ONLY state to not apply for its remaining federal #Covid19 emergency $ to aid K-12 schools. What is Gov. DeSantis waiting for? Our students, faculty + parents are counting on these funds to make up for lost ground and stay safe in schools.

—Representative Fentrice Driskell-On this #NationalTeachersDay, I’m thinking of my mother, a longtime public school teacher, and the values she instilled in me which helped me succeed in school and later, my career as well. Thank a teacher this week for the incredible work they do!

—Rep. Anthony Sabatini-Woke @Disney—a company run by toxic unAmerican leftists—is now creating regime propaganda to promote criminal nutjob Dr. #Fauci. Absolutely disgusting. Shame on the RINOs in the @FloridaGOP that kiss the ass of this leftist company and take campaign contributions from it

—Rep. Omari Hardy-Workers are demanding better for themselves & their families, and big corporations & the billionaire class are learning that they can’t get away w/ exploiting working-class people to no end. All this is happening even though our labor laws are skewed against the workers.

—Christina Pushaw-Why is it necessary to send the FBI to address disputes at school board meetings? 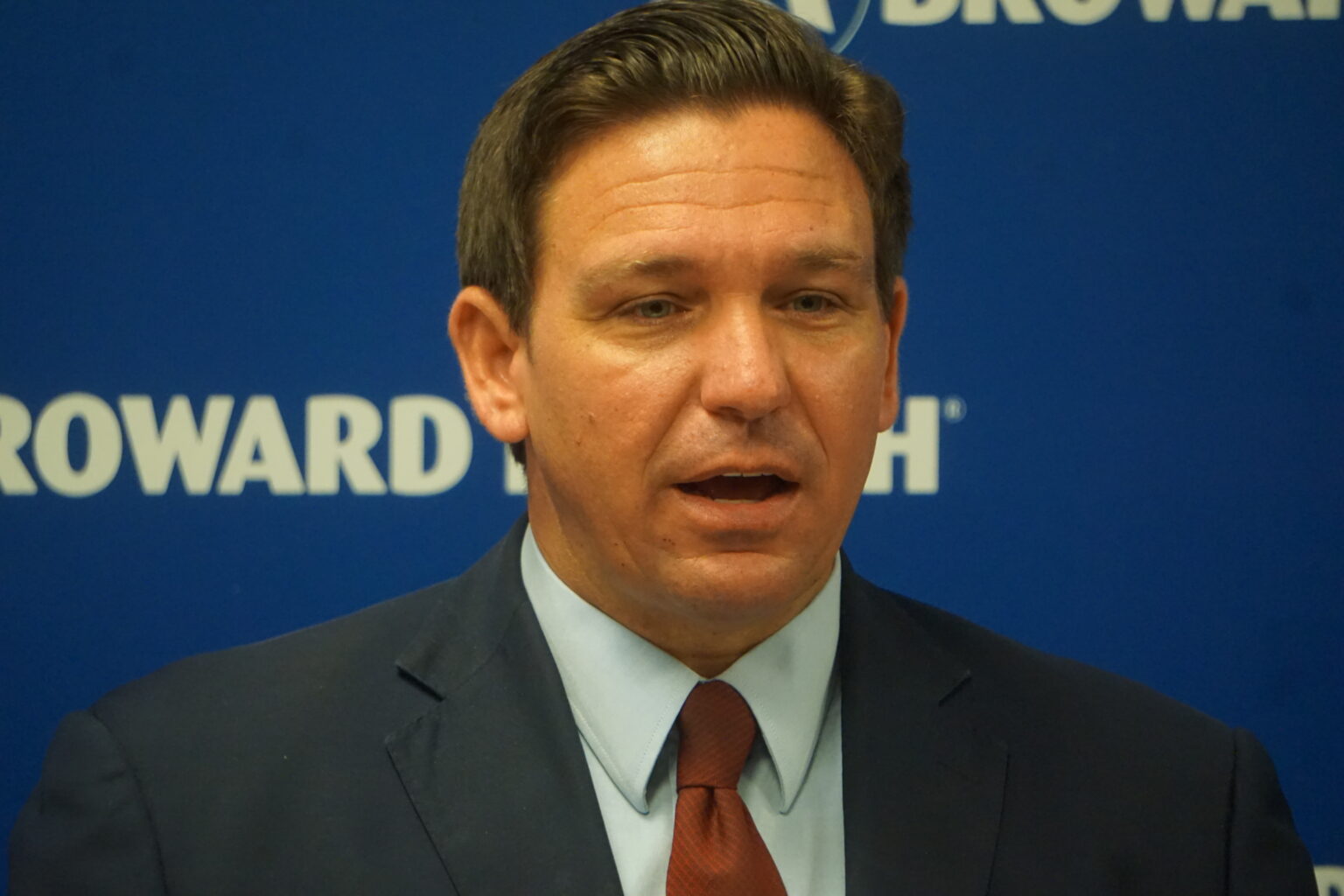 “Rick Scott Equates Biden Administration to ‘Systemic Socialism’ by The Floridian’s Javier Manjarres—Florida Senator Rick Scott fell short of referring to President Joe Biden as “Comrade” when he responded to news that the Biden Administration was going to use the FBI to monitor and question parents who oppose critical race theory. Sen. Scott equated the administration’s attempt to silence parents and the recent move to allow the IRS to “monitor Americans’ financial transactions,” to “Systemic Socialism” that is carried out by the Communist and Socialist countries of China, Russia, and Cuba.

“DeSantis Condemns Biden Administration for Targeting Parents With FBI” by The Floridian’s —Florida Gov. Ron DeSantis is standing firmly with parental choice and free speech after the Biden Administration announced that they were mobilizing the FBI to investigate, and possibly label some parents as ‘domestic terrorists’ for voicing their opposition against mask mandates and the controversial critical race theory that many school districts are “indoctrinating” children with.

“GOP Officials Embrace Constitutional Carry in Florida” by The Floridian’s Daniel Molina—Republicans and Democrats have been squabbling over the issue of gun control in the state of Florida and in the country, and with Constitutional Carry being discussed for the 2022 legislative cycle, tension is rising as Florida Gun Rights staff press elected officials on where they stand regarding the issue.

“U.S. Adversaries China and Russia Continue Fueling Venezuela’s Criminal Regime” by The Floridian’s Javier Manjarres—China, Russia, and Iran, three of the top U.S. adversaries are expanding their presence and strengthening their ties with rogue governments such as that of Dictator Nicolas Maduro.

“Scott Blames ‘Savage Cartels’ for Florida’s Fentanyl Issue” by The Floridian’s Daniel Molina—Florida continues to confront a growing opioid crisis, and lawmakers have responded with legislation in order to deescalate the concern. Senator Rick Scott (R), who oversaw the concern while he served as Governor of Florida, is addressing the issue by placing blame on “savage cartels” for the crisis.

“Biden Blasts Republicans As ‘Hypocritical, Dangerous’ On Debt Limit Issue” by The Floridian’s Mona Salama—President Biden is urging Republicans to back off playing “Russian roulette with the American economy” and help Democrats raise the debt ceiling ahead of the looming default deadline while chastising the opposing party’s obstruction of the issue as “hypocritical, dangerous and disgraceful.”

“Francis Suarez Teases ‘Miami Coin’ Currency” by The Floridian’s Jim McCool—Miami Mayor Francis Suarez (R-FL) is a self-described crypto currency advocate and has introduced the practice publicly in the city of Miami. The South Florida Mayor is now teasing what he calls “Miami Coin.”

“Military Veterans Could Flood Congress in 2022” by The Floridian’s Javier Manjarres—More and more Americans with a military history are joining the ranks of members of the U.S. Congress even though there is a nationwide effort by Progressives and anti-war proponents to demonize the U.S. military and the personnel that makes it run.

“Florida Democrats Rally Against Florida’s ‘Heartbeat Bill’ by The Floridian’s Javier Manjarres— The Florida March of Reproductive Freedom rally took place in downtown Fort Lauderdale this past weekend to call attention to the recently-filed Texas-style “Heartbeat bill” introduced in the Florida Legislature.

“Matt Gaetz Claims FBI Participated in January 6th Riot” by The Floridian’s Jim McCool—In a recent Tweet, Rep. Matt Gaetz called the events of Janury 6th, 2021 “the political cudgel in America used against the Silent Majority,” a sentiment many Republican voters would agree with after a select committee and comparisons between 1/6/21 and 9/11/01.

“Makki Accuses Former Obama Supporter Anna Paulina Luna of Being a ‘Phony’ by The Floridian’s Javier Manjarres—As the 3rd quarter of the 2021 fundraising cycle came to a close this week, Republican Congressional candidate Amanda Makki sent out a fundraising email calling (again) her primary opponent, Anna Paulina Luna, a “phony.”

“Deutch: ‘Addiction Doesn’t Discriminate” by The Floridian’s Daniel Molina—Since 2019, lawmakers have crossed the political aisle for very few bipartisan efforts. With Congress Goes Purple, lawmakers honor and recognize National Recovery Month, an initiative to raise awareness for the drug addiction pandemic that has swept the country, by wearing purple attire and purple masks in support of the cause. Sharing his support and informing followers, Florida Rep. Ted Deutch (D) expressed his support, affirming that “addiction doesn’t discriminate.”

“DeSantis Launches Investigation on Facebook Over Election Interference” by The Floridian’s Jim McCool—While Florida has been the hotspot for all things COVID-19, Big Tech is still a key priority of Florida Republicans, especially Gov. Ron DeSantis. Now, Ron DeSantis (R-FL) has launched an official investigation of Facebook over alleged election interference.

“Mast Accuses House Democrats of ‘Funneling’ Tax Dollars to Hamas” by The Floridian’s Javier Manjarres—Florida Rep. Brian Mast (R), who volunteered with the Israel Defense Forces (IDF) after retiring from the U.S. Army, recently stated that “The Squad” in the House had influenced their more moderate Democratic colleagues into “funneling” American “tax dollars to Hamas and forsaking” the nation of Israel after they voted against refunding the life-saving Iron Dome missile defense system.

Florida’s COVID-19 Cases and Deaths Decline” by The Floridian’s Daniel Molina—For most of 2021, COVID-19 has been in large part, sucked the air out of the state as a result of the virus’s infection and death rate. Florida Governor Ron DeSantis (R), like Texas Governor Greg Abbott (R), has maintained a rivalry with President Joe Biden (D) over vaccine mandates, mask mandates, and vaccine passports. With new information being reported regarding COVID-19 related concerns in the state, Florida has now experienced fewer COVID-19 deaths along with a dip in cases.

“Rubio, Menendez File Resolution to Help Venezuelan Women and Children” by The Floridians’s Jim McCool—As the Humanitarian Crisis in Venezuela heightens to new levels, U.S. Senators Marco Rubio (R) and Bob Menendez (D) have coauthored a resolution that expresses “alarm over the growing humanitarian needs of women and children inside Venezuela and those seeking international protection in neighboring countries.” The Resolution commends the Government of Colombia “for joining the United States in granting Temporary Protected Status to Venezuelans” and “urges other refugee-hosting countries to consider similar protections.”

“Rep. Ted Deutch Rejects Progressive ‘Lies’ About State of Israel” by The Floridian’s As the Humanitarian Crisis in Venezuela heightens to new levels, U.S. Senators Marco Rubio (R) and Bob Menendez (D) have coauthored a resolution that expresses “alarm over the growing humanitarian needs of women and children inside Venezuela and those seeking international protection in neighboring countries.” The Resolution commends the Government of Colombia “for joining the United States in granting Temporary Protected Status to Venezuelans” and “urges other refugee-hosting countries to consider similar protections.”

“Crist Calls for ‘Reckless’ Ladapo to be Fired” by The Floridians Daniel Molina—Governor DeSantis’ announcement that Dr. Joseph A. Ladapo would be serving as Florida’s new Surgeon General drew criticism from a number of Democrats. Ladapo, in speaking to Floridians, shared that the approach to the ongoing COVID-19 pandemic should not be “from a place of fear” during a press conference earlier this week.

“James Uthmeier Named DeSantis’ new Chief of Staff” by The Floridian’s—This week, Florida Governor Ron DeSantis (R) announced that he had picked Dr. Joseph A. Ladapo as Florida’s be Surgeon General. The move generated a lot of discussion because of the ongoing COVID-19 pandemic and how it continues to affect the Sunshine State.

“Rubio Highlights Biden’s ‘Incompetence’ Created ‘Cascade Of Calamities’ At The Border” by The Floridian’s Mona Salama—Sen. Marco Rubio (R-FL) released a video Thursday highlighting the latest high-profile border disaster that saw over the past week a sea of migrants, the majority being Haitian encamped under a bridge, a situation self-inflicted by President Biden’s lack of action that caused “a cascade of calamities and disasters.”

“Suarez: Biden Showed Poor Leadership on Cuba and Afghanistan” by The Floridian’s Jim McCool—With US foreign policy drastically changing amid the ongoing crises overseas in Cuba and Afghanistan, many Republicans are worried the Biden Administration is not doing enough on the global stage to addresses those crises. One of the most vocal and concerned politicians is Mayor Francis Suarez (R-FL) of Miami, who recently stated that “the United States is retreating and China and Russia are advancing” around the world

“White House Doesn’t Know If Biden Has Ever Visited Southern Border During His 5 Decades in Politics” by The Floridian’s Mona Salama—White House Press Secretary was unable to say when or ever President Biden, during his lifelong career in politics that spans more than five decades, has paid a visit down to the southern border, either during time as Senator or Vice President.

“Majority of Americans Oppose Transgenders Using Women’s Restrooms” by The Floridian’s Jim McCool—In a Rasmussen Poll conducted this week, the polling firm found that the vast majority of Americans (60%) oppose this new effort to allow transgender Americans to use the bathroom they identify with. One would think with time comes progress, but these numbers are actually up from 49% in 2017, jumping 11% in just 4 years.

The JUICE is juiced by Javier Manjarres, Daniel Molina, and Jim McCool

The JUICE is juiced by Javier Manjarres, Daniel Molina, and Jim McCool.