Nikkei Asia is tracking the spread of the coronavirus that was first detected in the central Chinese city of Wuhan.

Cumulative global cases have reached 229,083,964, according to Johns Hopkins University in Baltimore. The worldwide death toll has hit 4,700,041.

For more information about the spread of COVID-19 and vaccination progress around the world, please see our interactive charts and maps.

— Status of vaccinations around the world

3:00 a.m. A second shot of the Johnson & Johnson vaccine boosts protection against symptomatic and severe COVID-19, the disease caused by the coronavirus, the drug company says.

In a clinical trial, researchers found that two doses of the vaccine delivered 94% efficacy against mild to severe COVID-19 in the U.S., up from 74% conferred with a single shot, the company reports.

Medical workers could start receiving the shots before the end of the year, Kono added. The announcement comes after the health ministry presented to experts a plan to start giving booster shots to people eight months after their second dose.

Because the eight-month time frame determines the dates for the third shots, Kono says he does not expect the rush for reservations seen when vaccinations were first opened up to the general public in early summer.

6:30p.m. Tokyo’s new daily cases hit the lowest number in three months as the Japanese capital appears to have got the latest delta variant outbreak under control. The city reported 253 new cases, down from 302 a day earlier, while the seven-day average in Tokyo fell to 663, down about 46% from a week ago. Tokyo is still under the state of emergency through Sept. 30.

The New Zealand government has stiffened penalties for those who violate COVID-19 restrictions, with those convicted subject to fines of up to NZ$12,000 or six months imprisonment.

5:20 p.m. New Zealand announces higher fines of up to NZ$12,000 ($8,400) for individuals who breach coronavirus restrictions amid concerns that the current outbreak may spread beyond Auckland to other regions. A person who intentionally fails to comply with a COVID-19 order, such as traveling without permission, will be deemed guilty of a criminal offence and liable on conviction for a fine of up to 12,000 New Zealand dollars, up from NZ$4,000, or six months imprisonment.

5:00 p.m. Property prices in Japan fell 0.4% in the year to July, following last year’s 0.6% decline, as the country’s closed its borders and imposed emergency curbs to combat the pandemic hit demand for new restaurants and hotels, an annual government survey shows. In a sign the pandemic is reshaping the economy, land prices for industrial areas rose for the fourth straight year on booming demand for warehouses for electronic appliances and other goods catering to stay-at-home demand.

4:40 p.m. Indonesia’s central bank holds its benchmark rates unchanged at a record low as it seeks to prop up the economy after a recent devastating COVID-19 wave without adding pressure on the currency, the rupiah. Bank Indonesia held the benchmark seven-day reverse repurchase rate steady at 3.50% for a seventh straight monetary review.

4:00 p.m. Spas, cinemas and mahjong salons in the Chinese city of Harbin were ordered to close to prevent COVID-19 from spreading in poorly ventilated spaces, state television reports. The temporary shutdowns were part of a range of restrictions imposed on the northeastern city after one case of community transmission was detected. Religious activities were also suspended, tourist attractions were ordered to operate at half capacity, and visits to retirement homes were banned. 3:20 p.m. Japan will start administering a third dose of vaccines to the elderly early next year, vaccination minister Taro Kono says. The government decided last week to give booster shots to people who have gone at least eight months since receiving their second dose. Health care workers are expected to receive booster shots by the end of the year, as they were the first to be vaccinated in Japan starting in February. The vaccine rollout expanded to people aged 65 and older in the spring, followed by those with underlying conditions such as diabetes and finally the general population.

11:30 a.m. China reports 42 new locally transmitted cases, all in the southeastern province of Fujian. The daily tally was down from 49 a day earlier, but the number in Fujian rebounded from 28 the previous day.

11:00 a.m. South Korea reports 1,729 cases — up from 1,604 a day earlier — marking a record high in cases for a Monday and the fourth consecutive day to register a higher daily count than the same day a week earlier.

10:30 a.m. Australia’s New South Wales state, the epicenter of the country’s worst coronavirus outbreak, reports 1,022 locally acquired cases, up from 935 a day earlier. Ten new deaths were recorded in the state, taking the total number of fatalities in the latest outbreak to 255. 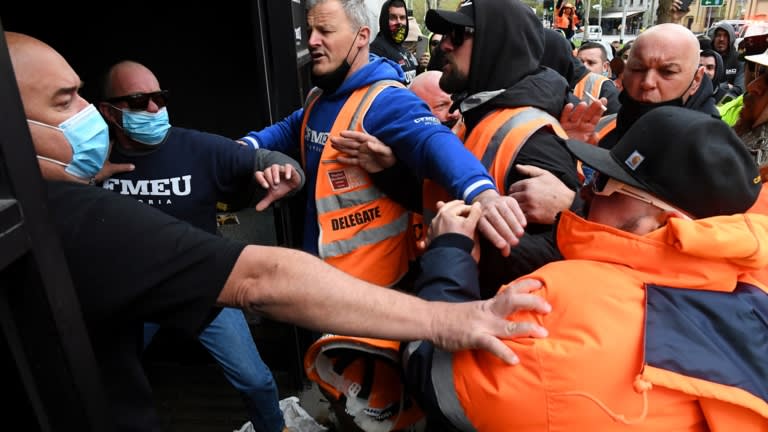 8:45 a.m. Australia shut down construction sites in Melbourne for two weeks after a protest against vaccine mandates in the city turned violent and infections in the state of Victoria surged. Hundreds of people clashed with union officials, throwing bottles and a crate at them, footage on social media showed, after Victoria required all construction workers to have at least one vaccine dose by Friday.

2:51 a.m. Sport climbing’s Boulder and Speed World Cup scheduled to be held in Seoul on Oct. 1-3 has been cancelled due to the COVID-19 pandemic, the International Federation of Sport Climbing says.

2:15 a.m. The U.S. will allow fully vaccinated foreign travelers to enter the country starting in November, according to the White House COVID-19 coordinator.

Travelers will have to show proof of vaccination before boarding any plane flying to the U.S., as well as proof of a negative COVID-19 test within three days of departure. There will be no quarantine mandate. Unvaccinated Americans returning from abroad will face stricter testing requirements. Read more.

1:09 a.m. India expects to get its first Johnson & Johnson COVID-19 vaccine doses from next month, filled and finished in India by a partner of the U.S. drugmaker, reports Reuters, citing a source with knowledge of the matter. A teenager receives a dose of the Pfizer-BioNTech vaccine against the coronavirus in the U.S.

9:35 p.m. Clinical trials in which the Pfizer-BioNTech vaccine was administered to children aged 5 to 11 showed a robust immune response, the companies say. They plan to seek authorization to use the vaccine for that age range as soon as possible in the U.S., Europe and elsewhere.

The safety profile and immune response in the companies’ Phase II/III clinical trial is generally comparable to that of the 16-to-25 age group, Pfizer and BioNTech add.

“Over the past nine months, hundreds of millions of people ages 12 and older from around the world have received our COVID-19 vaccine,” Pfizer CEO Albert Bourla says in a statement. “We are eager to extend the protection afforded by the vaccine to this younger population, subject to regulatory authorization, especially as we track the spread of the Delta variant and the substantial threat it poses to children.”

For older Americans, the U.S. Food and Drug Administration is expected to make a decision soon on whether to approve the Pfizer-BioNTech vaccine as a booster shot. 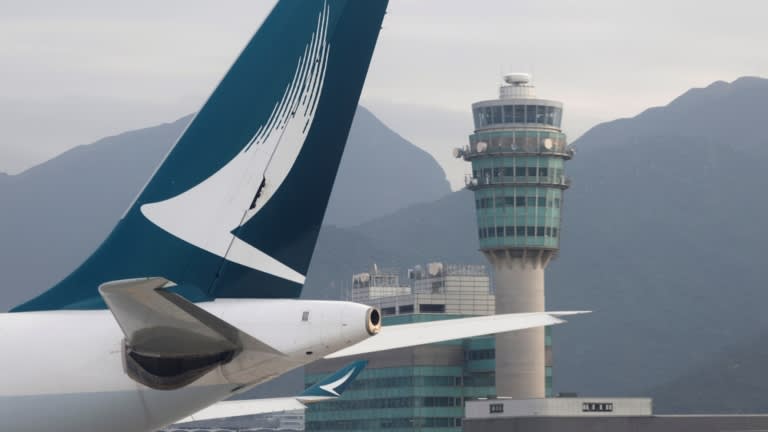 Cathay Pacific continues to aim for a cash burn of less than HK$1 billion ($130 million) a month for the rest of the year.

2:20 p.m. Vietnam’s capital Hanoi will further ease its coronavirus restrictions from this week, the government said, with new cases on the decline and the majority of its adult population partially vaccinated, according to Reuters.

1:45 p.m. Hong Kong’s Cathay Pacific Airways says it had lowered its passenger capacity forecast for the remainder of the year to 13% of pre-COVID levels, down from an earlier 30% target for the fourth quarter, as travel restrictions linger. The airline said it continued to target a cash burn of less than HK$1 billion ($130 million) a month for the rest of the year, according to its monthly traffic report.

10:25 a.m. Australia’s Victoria State reports its biggest daily rise in COVID-19 cases this year. A total of 567 new locally acquired infections were detected in the state, the majority in the state capital, Melbourne, up from 507 on Sunday. One new death was recorded. Daily cases have topped 500 for the past five days, according to Reuters. Demonstrators protest a lockdown during  “The Worldwide Rally for Freedom” in Melbourne, Australia on Sept. 18.

U.S. President Joe Biden is due to convene a virtual COVID-19 summit Wednesday on the sidelines of the U.N. General Assembly. Brown said he had sent Biden and fellow Group of Seven leaders the research of analytics company Airfinity, which found that rich Northern Hemisphere countries had 100 million doses that would expire by December without being used.

2:22 p.m. Australia reports 1,607 new cases as states and territories gradually shift from trying to eliminate outbreaks to living with the virus. Victoria, home to about a quarter of Australia’s more than 25 million people, recorded 507 as Premier Daniel Andrews said a lockdown will end once 70% of those 16 and older are fully vaccinated — a threshold forecast to be reached around Oct. 26. About 43% of Victorians aged 16 and older have been fully vaccinated, trailing the national rate of about 46%.

New South Wales, Australia’s most populous state and home to Sydney, reports 1,083 cases as it uses lockdowns and vaccination blitzes to fight an outbreak of the delta variant that began in mid-June. The state eased some restrictions on gathering Sunday. About 52% of people 16 and older there have been fully vaccinated.

1:12 a.m. Singapore records 1,009 new cases, the highest since April last year. A recent rise in cases after the relaxation of some COVID-19 measures has prompted Singapore to pause further reopening. More than 80% of its population has been vaccinated.

The capital had restricted entry to those with a negative PCR test. This month, Abu Dhabi removed the need to quarantine for all vaccinated travelers arriving from international destinations.

5:07 p.m. Police arrest 235 people in Melbourne and 32 in Sydney at unsanctioned anti-lockdown rallies, where several police officers are injured in clashes with protesters.

About 700 people gather in parts of Melbourne, as 2,000 officers made the city center virtually a no-go zone, setting up checkpoints and barricades. Public transport and ride shares into the city are suspended.

12:00 p.m. Vietnam has approved Cuba’s Abdala vaccine for use against the new coronavirus, the government says, as the Southeast Asian country is battling its worst outbreak. Abdala becomes the eighth COVID-19 vaccine approved for use in Vietnam, which has one of the lowest vaccination rates in the region, with only 6.3% of its 98 million people having received at least two shots. The announcement came hours after President Nguyen Xuan Phuc left Hanoi for an official visit to Havana.

To catch up on earlier developments, see the last edition of latest updates.

Tags:
Previous Article
Utah lawmakers are using tax threats to force social media companies to the negotiating table
Next Article
Skipping the Olympics is not an option for many advertisers

Skipping the Olympics is not an option for many advertisers
admin September 22, 2021