The journalist Masha Borzunova during a recording of the show Fake News in the Moscow studios of TV Rain. Lucian Kim / NPR hide caption 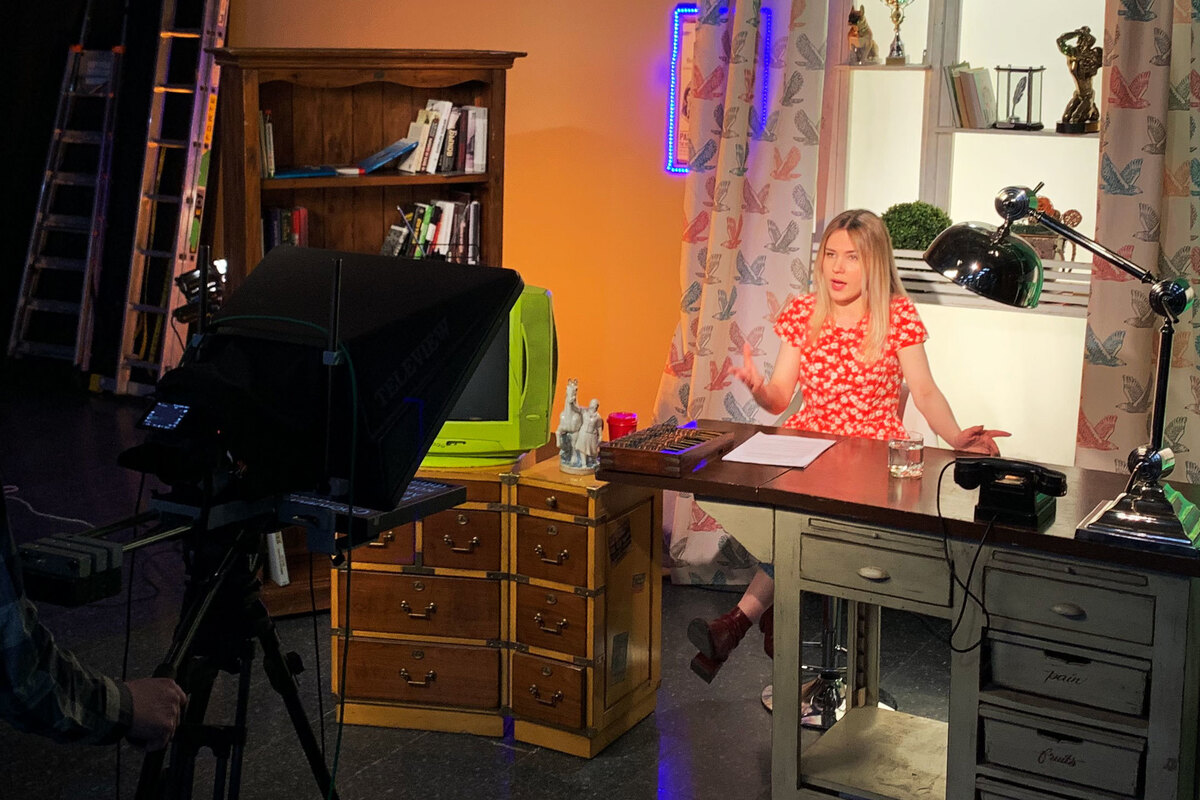 The journalist Masha Borzunova during a recording of the show Fake News in the Moscow studios of TV Rain.

Editor’s note: The fight against disinformation has become a facet of almost every story international NPR correspondents cover, from reluctant vaccination to authoritarian governments telling lies. These and other stories from correspondents around the world focus on various tactics to combat disinformation, its effects, and what other countries could learn from it.

MOSCOW – Russian television news is a far cry from the clumsy, wooden news broadcasts of the Soviet Union. From their state-of-the-art Moscow studios, Russia’s main channels – all government-run – broadcast skilfully produced news programs that reach tens of millions of people every day.

The overall message is always the same: President Vladimir Putin works tirelessly to help ordinary Russians and stave off aggression by the United States and its allies. The Kremlin’s media machinery is telling Russians exactly what to make of the political movement of incarcerated opposition leader Alexei Navalny to the recent US sanctions.

Although Russians can tune out over dozens of entertainment and sports channels, there is almost no news alternative to government propaganda on Russian television – except for one channel, Dozhd, also known as TV Rain.

Week after week, the station, which is currently limited to the Internet, broadcasts a program called Fake News, which, according to the Kremlin, frivolously deconstructs the world. The show describes itself as a guide through the latest manipulations of state television.

In a recent episode, host Masha Borzunova impaled state television for its newfound obsession with Navalny – which it used to ignore – and the evergreen theme of the impending war with the United States.

“We don’t choose our topics, we choose our friends on state television. We talk about what they’re talking about,” says Borzunova after recording the program in the TV Rain studios in a converted Moscow factory.

“Propaganda isn’t just about fake news or open lies,” she says. “State media can only tell that part of the truth that is convenient for the government.”

Fake news has gained a loyal following on YouTube, where a weekly episode can easily get more than half a million views.

Moscow TV critic Anna Kachkayeva says the show has become its own brand.

“This program is a very important part of the media landscape,” she says. “It’s not even so much about exposing counterfeits, it’s about deciphering what is happening on television.” 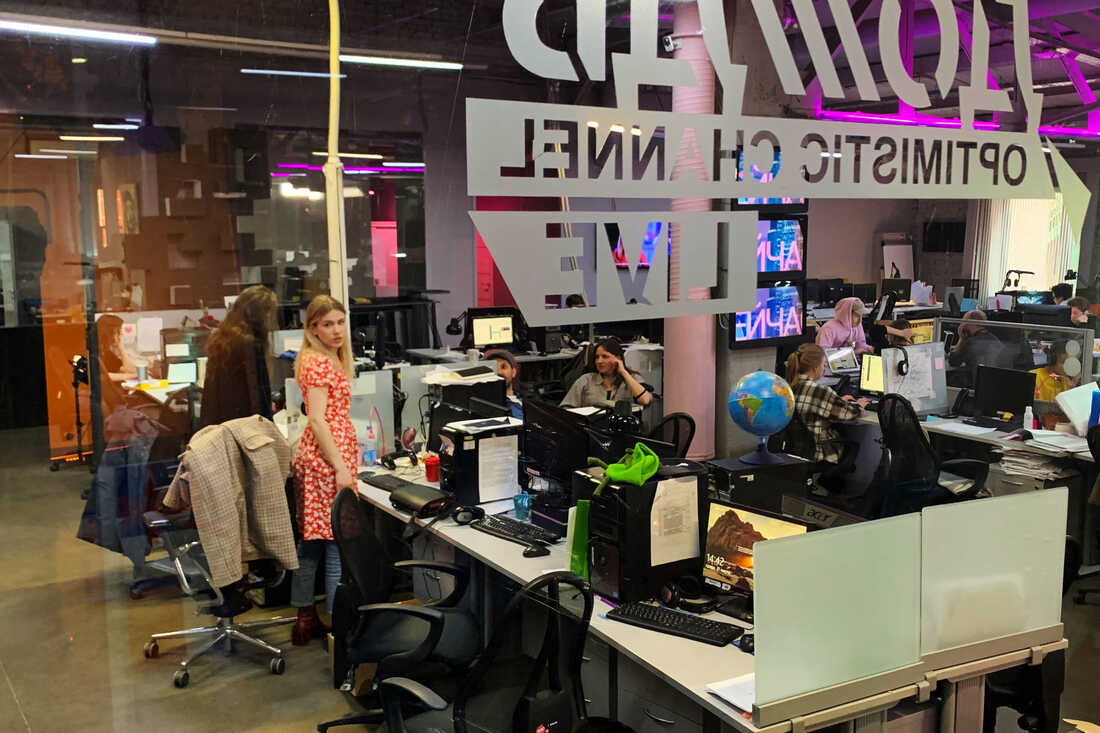 Borzunova is in the TV Rain newsroom. TV Rain, which initially called itself “the optimistic broadcaster”, has become an alternative to state television. Lucian Kim / NPR hide caption 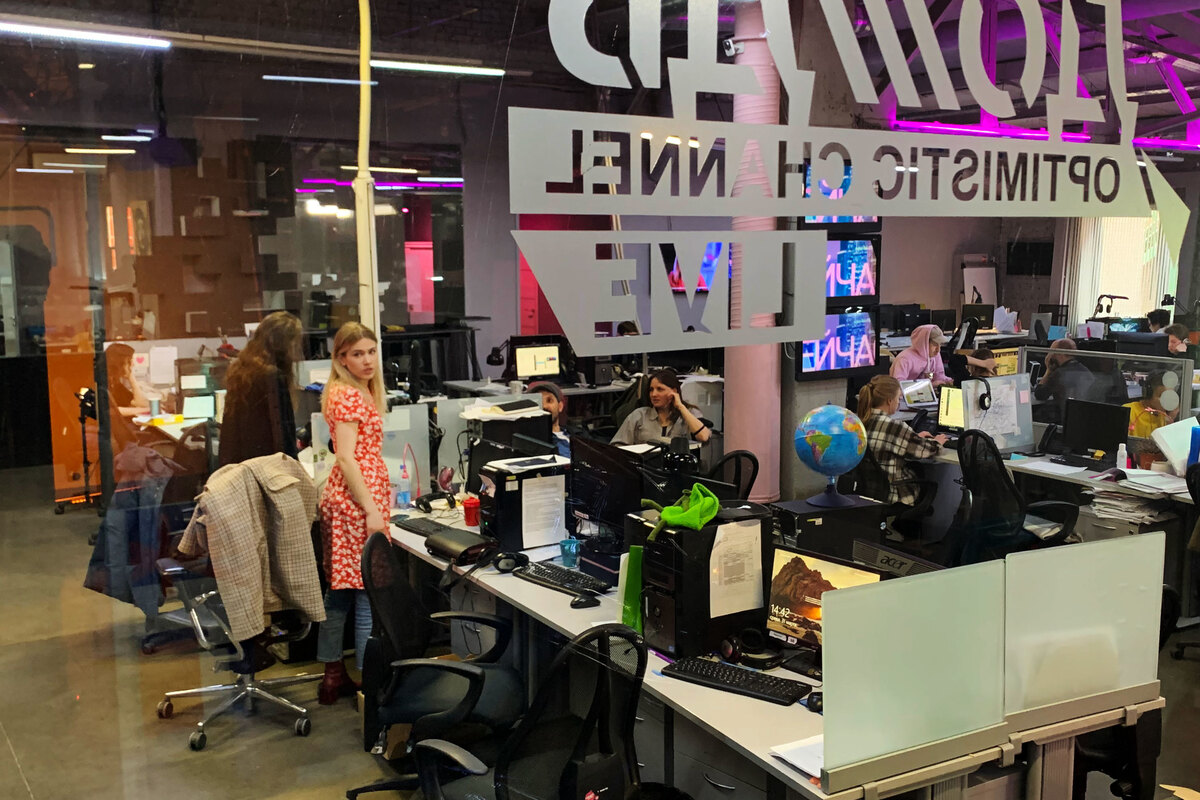 Borzunova is in the TV Rain newsroom. TV Rain, which initially called itself “the optimistic broadcaster”, has become an alternative to state television.

As for news channel TV Rain, Kachkayeva says he has played a unique role since it was founded in 2010 – when Dmitry Medvedev was Russia’s president and many people hoped it would enable a more open political environment.

TV Rain, which initially called itself “the optimistic broadcaster,” unexpectedly became an alternative to state television with its tough coverage of a January 2011 terrorist attack on a Moscow airport and a wave of anti-government protests in that government media largely in the same year ignored.

The station’s independence soon provoked the anger of officials. In 2014, Russian cable operators stopped broadcasting TV Rain, forcing the broadcaster to go online and rely on a subscription service for revenue.

“The channel has proven to be an alternative in an already very cleared information space,” says Kachkajewa. “It’s the channel of the urban, educated class, not a mass audience.”

Television remains dominant in Russia even as media consumption increases. Last year, 73% of Russians named television their main news source, compared with 94% in 2009, according to a poll by the independent Levada Center. At the same time, 39% of respondents also cited online news sites and social media as their No. 2 and No. 3 news sources, respectively, which has increased dramatically over the same period. 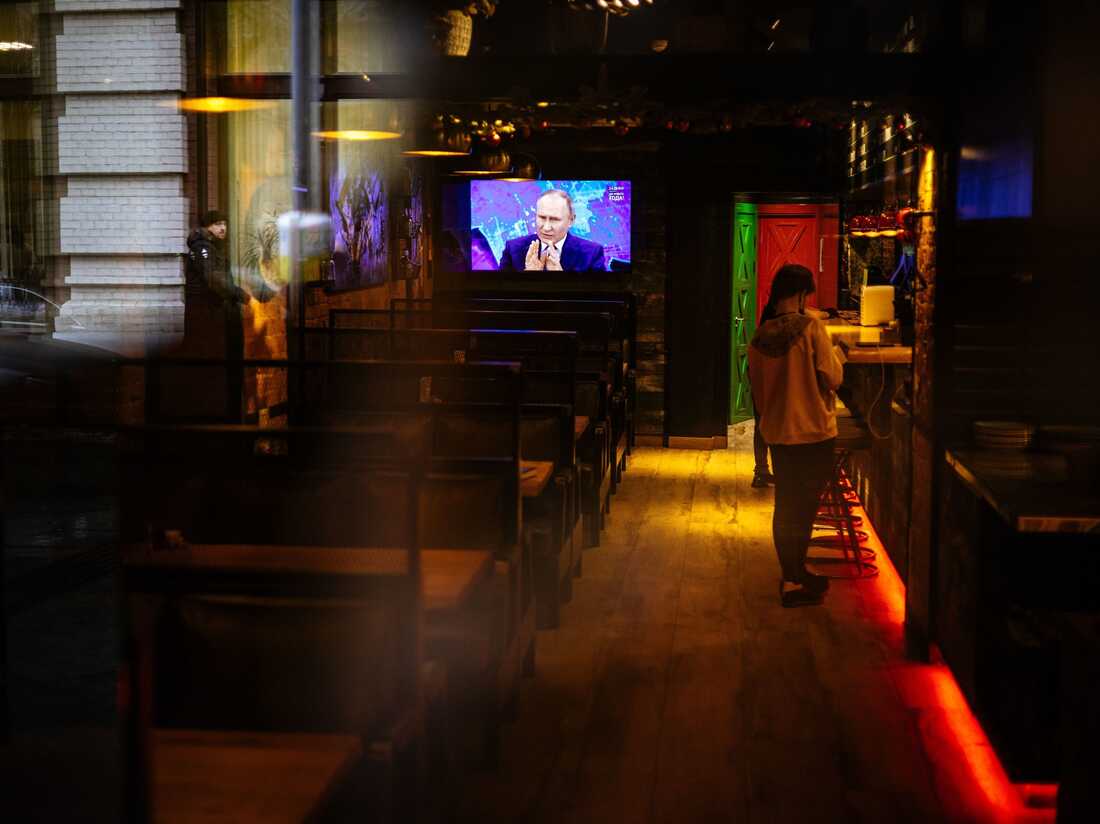 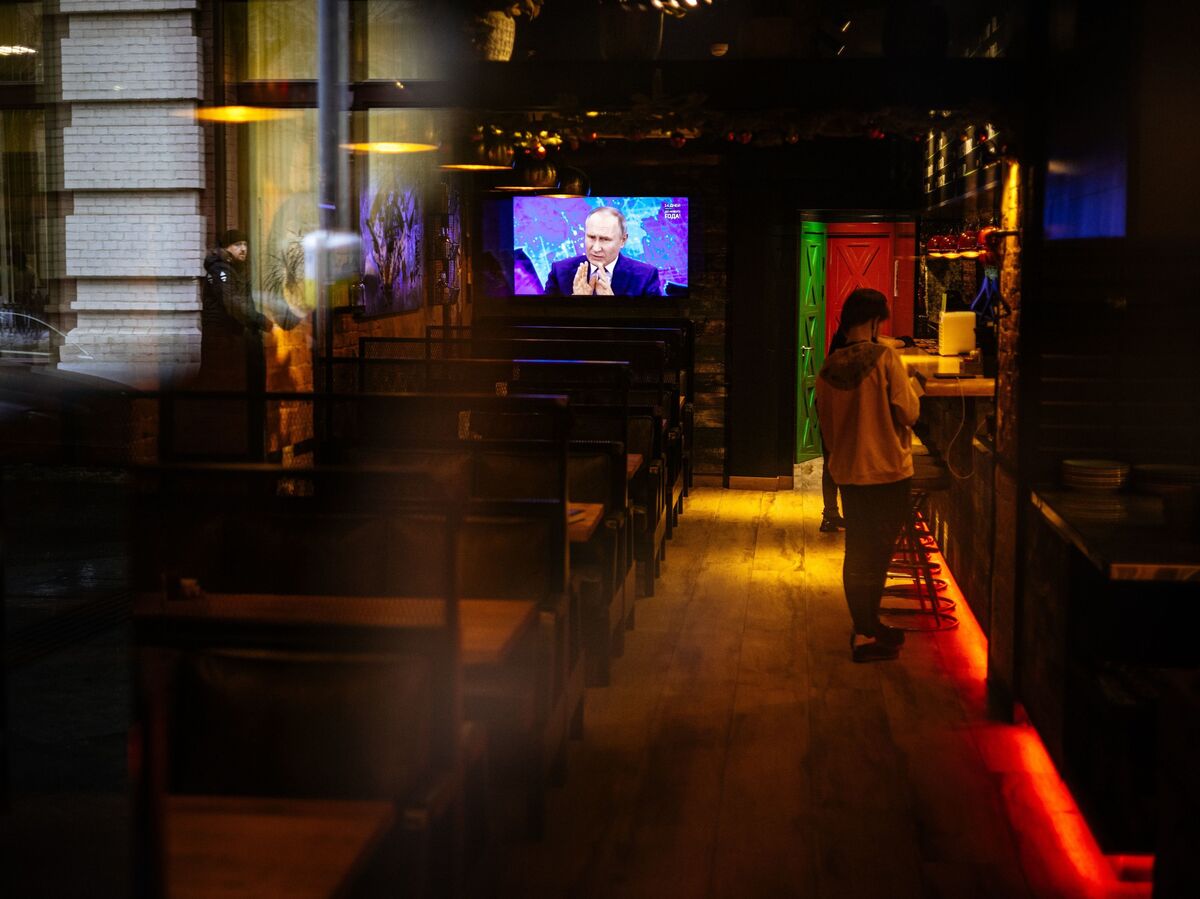 Through a restaurant window, a television screen shows Russian President Vladimir Putin at his annual press conference in Moscow on December 17, 2020.

TV Rain’s YouTube channel drew 450,000 new subscribers and a record 190 million views in January and February this year after Navalny was arrested and demanded nationwide protests against his release.

Still, Natalya Sindeyeva, the owner and founder of TV Rain, says the station is constantly threatened with closure.

“The risks are enormous and unpredictable. I don’t like to think about them,” she says.

The broadcaster’s license could be revoked for legal reasons or the public prosecutor could initiate criminal investigations. One reason TV Rain hasn’t closed yet could be because the Kremlin can claim that there is freedom of the press in Russia, Sindeyeva says.

Since Navalny’s arrest, the Russian authorities have searched and detained independent journalists. After the government branded the news site Meduza as a “foreign agent” in April, it lost advertisers and is now struggling to survive. After raids on Moscow student magazine DOXA a month ago, Amnesty International said the Russian authorities had launched a “comprehensive attack” on journalists.

Russia ranks 150th out of 180 countries in Reporters Without Borders’ rating of press freedom, describing a “very depressing climate” for critical Russian journalists.

The Kremlin claims that under increasingly stringent laws, the media can freely report what they want.

Although her channel questions the narratives carried by state media, Sindeyeva refuses to label TV Rain as “opposition media”. She paraphrases the Czech dissident Vaclav Havel and says that the truth will always stand in opposition to a system built on lies.

Disinformation in Russia is worse today than it was during communism, said Sindeyeva. In Soviet times it was understood that the government media were lying, she says, but today there are so many sources of information that people no longer know what to believe.

“The main problem is not only that the lies are very high, but that people don’t recognize lies and very often believe them,” says Sindeyeva.

This is where the show Fake News comes in, in which presenters like Borzunova dissect Kremlin propaganda every weekend.

At the end of their program, Borzunova urges viewers to like it, share it – and show it to their parents and grandparents, the most likely consumers of state television.

Audiences usually leave thousands of comments thanking her for the show. “You opened people’s eyes,” wrote one viewer recently.

Despite the defiant stance of her channel, Sindeyeva says his main job is not to fight propaganda but to report on what is really going on in the world.

“Our job is to give people the opportunity to form their own opinion,” she says. “As long as there is free space on the Internet, people should decide for themselves whether to be fooled.”

Tags:
Previous Article
Why should feminists care about media literacy?
Next Article
How executives around the world are harnessing the power of social media

How executives around the world are harnessing the power of social media
admin September 12, 2021