Joan MacDonald’s health suffered. By the age of 71, she was overweight and was taking several medications. She had high cholesterol, rising blood pressure and kidney problems.

Your daughter is a fitness Trainer. She warned that MacDonald would get seriously ill if she didn’t make big changes.

So she did. She went to the gym for the first time and learned to eat healthily with the help of a new tool: an iPhone.

Now 75, MacDonald promotes Fitness on social media. She has 1.4 million followers on Instagram.

This photo shows Joan MacDonald, 75, in Tulum, Mexico, on September 1, 2020. MacDonald is one of a growing number of “grand fluencers,” 70 and over, who are making a name for themselves on social media. (Michelle MacDonald via AP)

She is part of a growing number of “Grand Fluencers” – people over 70 who have a large number of social media followers.

Many of her fans are several years younger.

“It’s so rare to find someone her age who can do all of these things,” said 18-year-old supporter Marianne Zapata.

MacDonald and other senior social media influencers are turning their popularity into a profit.

MacDonald has paid partnerships, including with sportswear and nutrition company Women’s Best. She also just launched her own health and fitness App.

On TikTok, four friends who call the handle @oldgays have 2.2 million followers. The four men who are Happy, are all 65 years of age or older. They use TikTok to harass fans with their wrong answers to popular culture questions. You have a paid advertising contract with Grindr, a gay dating app.

78-year-old Lagetta Wayne is another grand fluencer. She has young people asking her to be her grandmother. She tends and cooks vegetables from her garden online. She goes through @msgrandmasgarden on TikTok. 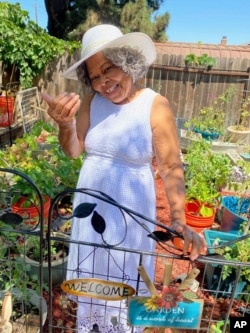 This photo shows Lagetta Wayne, 78, in her garden in Suisun City, California on August 10, 2021. Wayne is one of a growing number of “grand fluencers,” 70 and over who are making their mark on social media. (KiKi Rose via AP)

Wayne, from Suison City, California, has gained nearly 131,000 followers as of June 2020. She owes her success on social media to her young granddaughter. Her very first video, a garden tour, received 37,600 likes.

“One day my garden was very pretty and I was really excited and asked her if she would take some pictures of me,” Wayne recalls. “She said she would put me on TikTok and I said, ‘Well what is TikTok?’ I had never heard of it before. “

Since the pandemic, grandfluencers have expanded their social media usage beyond Facebook.

Jessay Martin is the second youngest of the old gays. He is 68 years old and lives in the California desert city of Cathedral City.

Like MacDonald, the old gay men fight against suspicion about what is possible in old age.

“They show … that you don’t have to be afraid of aging. The 20- and 30-year-olds don’t think about it often, “said Alison Bryant. She is an executive at AARP, an advocacy group for older Americans.

Sandra Sallin, author and artist, has slowly increased her number of followers on Instagram to 25,300. Her reach recently expanded to include British Olympic gold medalist Tom Daley after trying one of her family members Recipes. Sallin’s social media is all about cooking and beauty. She also shares pictures from her past and travels.

“I wanted to expand my world. I felt older, my world was shrinking. People were moving, “and people were sick, Sallin said. She started with her Blog because she wanted to reach people.

Senior influencer Sandra Sallin, 80, poses for a portrait at home in Los Angeles on Friday, August 20, 2021. Sallin is among a growing number of seniors making a name for themselves on social media. (AP Photo / Chris Pizzello)

Sallin said it was hard to learn how to use Instagram. She is surprised that many of her followers are 30 to 40 years younger than her.

69-year-old Toby Bloomberg is a supporter of Sallin. She found Sallin after Sallin appeared on the Food Network’s “Clash of the Grandmas” TV show.

“She talks a lot about aging,” said Bloomberg. This is unusual on social media as it is controlled by young people, Bloomberg added.

32-year-old Grace Maier stays at home all day with her two young children. She follows Barbara Costello, a 72-year-old Connecticut grandmother who uses the @brunchwithbabs handle.

“She does that Contributions‘Did your mother ever tell you?’ and I immediately followed her on Instagram, ”said Maier. Costello has many life proposals that remind Maier of her own grandmother. And Costello “seems like the kind of person who would welcome you into their home,” she said.

Mae Karwowski is the founder and managing director of the influencer marketing agency Obenssehen. She has more than 100 influencers between the ages of 60 and 80 in her network.

Karwowski said people like young Fashion Influencers often have entire teams of people who help manage their social media accounts. But many influencers over 70 do everything themselves.

Karwowski said most of the media news “presents a really close” position on this age group. The great thing about social media is that you can follow a really cool 75 year old woman who’s just doing her thing in Florida and it’s fun, she said. “That is different.”

I am Anna Matteo. And I am Alice Bryant.

Words in this story

cholesterol -n. a substance produced in the human and animal body that the body uses to make biological chemicals

Happy -Adj. a person who identifies as sexually attracted to the same sex

recipe -n. a series of instructions for preparing food

post -n. a message in an online messaging service

Fashion -n. a popular way to dress for a specific time or group of people

position -n. a way of looking at or thinking about something

New law could mean a change in firefighters for some Bradenton residents
admin May 16, 2022