The best podcasts to listen to in lockdown The rest of the country moved to Level 2 this morning, but for those poor old Aucklanders still on Level 4, RNZ podcast producer Justin Gregory has some podcast recommendations to keep you entertained.

Look, I know you’ve probably heard this show by now, but amazingly there are people who haven’t. The first season of Serial investigates the murder of an 18-year-old high school student whose body was found in a park. It’s the ancestor of pretty much every narrative podcast made since then, and every producer I know is stealing free from the techniques that Sarah Koenig and Julie Snyder invent and use brilliantly. For new listeners (and new podcast makers), listening to the first season of Serial is like basic training. But more importantly, it’s a great piece of storytelling. Season two; not as much.

Honorable Mention: Gone Fishing. Chaos and murder (maybe) in West Auckland. The best true crime story you’ve never heard of. Full Disclosure: I helped make this series, but it’s a mind-boggling story and one of the most successful New Zealand podcasts of all time.

That is politics and history as a mirror of contemporary life. The first season deals with the Watergate scandal and asks how an obviously corrupt president could still be so popular with his base. Season two is the impeachment trial of Clinton and the sordid story of how badly a young woman was treated by virtually everyone. For a change, the third season shows the friendship, aftermath, and murders of Tupac and Biggie. Ex-Klansman and neo-Nazi David Duke is featured in Season Four as he turns a wedge of angry, disappointed and forgotten voters into a major political force. And season five is about the fog of lies and nonsense that convinced an unlikely coalition of conservatives and liberals to support the invasion of Iraq. And without ever mentioning his name, almost every season revolves around the rise and reign of President Trump in subtle and not-so-subtle ways.

“Cockamamie!” It’s the most annoying word I’ve ever heard from a participant on the New York Times podcast, The Argument. It describes itself as having strong opinions and open-minded debates and that is exactly it. The secret sauce behind the podcast’s success is host Jane Coaston. Not only is she a moderator (although she does that very well), but she also brings her own arguments and clearly expresses her own position. Coaston generally comes across as fairer and often smarter than some of her guests, but then she can edit any episode. And the issues are not easy. They argue with critical race theory, vaccination regulations, abortion rights. But what excited a guest so much that he called his opponent’s argument “Cockamamie”? Whether or not we should try to contact aliens.

Social questions: what’s wrong with you?

Three disabled women made a great new podcast for Stuff about all of the questions healthy people ask, including the big question: What’s wrong with you? You can’t help but think, “What’s wrong with us that we need to ask?” should be the answer more often. Topics include dating with disabilities, travel, self-image, media representation and reshaping the world for disabled people. This is not a polite podcast. Instead, it’s a community of people who have the conversations they want to have with each other. The rest of us are invited to listen and hopefully understand a little better. And stop asking these questions!

This podcast pretty much does what it says on the tin. All bands are overrated, argue the two presenters, who are every music nerd you have ever met at a party, but much more entertaining – and much more vicious. The couple don’t cut up bands with big reputations so much, they cut and dice them. I cried with laughter when they proved that Smashing Pumpkins songs are nothing more than slowed 80’s hair metal. And poor Edge of U2 is being devastated for his lack of chops (‘If at any point what happens when he touches his guitar is what I call “playing the guitar, it was inadvertent”). You can go too far. It doesn’t take four episodes to convince me that Christmas music sucks, and when they go beyond the music and argue that the musicians sucks as humans as well, if not more, it’s a wonder they don’t get sued . But that’s why I listen. In small amounts.

I’m not going to apologize for including a podcast for RNZ on this list because it’s just so good. He Kākanou Ahou takes up the idea that as an urban Māori you are less connected to your culture. Host Kahu Kutia doesn’t think that’s true and meets a number of Māori in our cities in season one to prove it by connecting their stories with one another and with their sense of identity. This podcast collectively won and deserved a Voyager Media Award in 2020. Good news; there are two seasons and in the second the focus shifts to a possible future of Aotearoa. If you haven’t already, listen to He Kākanou Ahou and feed your brain and soul through your ears.

Short, cute, and beautifully done, this is a bilingual series of stories about the stars in the Matariki cluster. Stacey and Scott Morrison and Rhonda Tibble are your storytellers, gently guiding you through a rich soundtrack of Taonga Puoro and ambient noise. The form and production of this podcast are perfect, not just for their own sake, but because they deepen the listener’s understanding and contextualize the meaning and meaning of the stars for people and places. Each story is only a few minutes long and is suitable for both Tamariki and Te Reo Māori students. I love this podcast.

Comedy: My year in the cafeteria

Very fast, very funny, very badly edited and completely self-confident, that’s meta-podcasting by millennial comedian Jamie Loftus. As a drunken joke, Loftus is taking the test to join Mensa, the high-IQ club for “rich assholes who think they’re smarter than everyone else”. The series isn’t just about her disastrous year at the cafeteria and the five days she spent at the worst convention ever attended. It’s also about social media clusters, social awkwardness as a cover for aggression, and arguments against elitism and unnecessary divisions between groups of people. Loftus’ narrative style is completely outside of my experience, let alone my age group, and unlike most podcasts, you have to actively listen because if you wink, you’re missing out. Like Loftus says, ‘Go ahead, Smarty’. But I loved My Year in Mensa and laughed a lot, just like the idiot I am.

Honorable Mention: The Bugle. RNZ podcaster William Ray is a huge fan of what he rightly calls “probably the most successful comedy podcast of all time”. Host Andy Zaltman is also a great cricket writer and super fan. Cricket.

I’m cheating a bit here because I haven’t finished this podcast yet. But 200 year old has me under control and I’m always looking for ways to hear more. This docudrama takes place in the year 2218 and tells the story of a South African named Lesedi Nabadause, who is about to be 200 years old. It uses a mix of fiction and existing scientific research to describe a world very different from ours. What does money mean, how do you keep a marriage going for so long, how will family and society change? The podcast is a bit weird because it’s backed by a financial group called Sanlam that is about future planning. Nice connection, but you have to have some questions about their motives. But most importantly, listen carefully, especially when reviewing your portfolio of assets.

Science, you say? Bigfoot and extraterrestrial life, right? Yeah, I know, but Wild Thing is a series about the intersection between science and society and why we want to believe in the improbable. Moderator Laura Krantz rigorously and gleefully examines the evidence and her own hopes and beliefs, speaks to experts and ordinary people with extraordinary experiences, and treats them all impartially. She also has no problem dismissing unrealistic dreamers, or “The Woo” as they are called. And the podcast is fun too. Season one has some really hideous stories about encounters with Bigfoot, and season two gets as close as possible to alien encounters with no probes involved. For added fun, listen late at night without anyone else in the house. Sweet Dreams!

If you think you’ve ever gotten fed up, listen to this series and feel better. Not that many of us steered a giant ship onto a rock because we just couldn’t believe we were misoriented or drunk hijacked a plane and insisted it go to the other side of the world. But almost all of us have made mistakes and refused to admit it or ignored the advice of people who know better than we do. And that’s the genius of this series. Every story contains a warning, a moral, and is meant to teach us something we need to know. Host Tim Harford sees the series as an adult fairy tale, but you don’t have to worry about being taught. Harford is a gentle, non-judgmental guide and he’s here to help. Warning Tales also has a lot to tell us about contemporary life. Check out the episode on How to End a Pandemic or the mini-episode on the danger of doubting statistics. You have been warned. 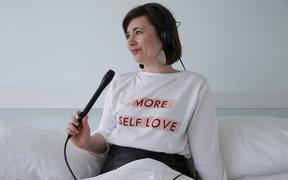 I don’t mind admitting that I have a deep professional jealousy of this podcast. Host Melody Thomas makes the most remarkable people tell amazing stories about sex and relationships. Where did she find them? How did she get them to talk? But she did, so if you want to hear real people (including Melody’s mom) talking about anything to do with it then BANG! gives you more bang for your buck. There are three seasons of stories that cover everything from straight men meeting up for anonymous gay sex, the challenge of monogamy throughout life, sex in the seventies in a retirement home, toxic masculinity, decolonization of sexuality and gender, and one special episode with answers to frequently asked questions. There are also two live shows recorded in front of audiences in Auckland and Christchurch. BANG! is the business and I really hope there will be more seasons in the future. If they arrive I’ll probably still be sulking.