Hillary Clinton’s campaign ran less political TV spots than any other presidential candidate in the past four presidential elections, according to a new study released Monday by the Wesleyan Media Project.

Clinton’s team spent a whopping $ 1 billion on the election in total – about twice as much as Donald Trump’s campaign. In the past few weeks alone, Clinton has spent $ 72 million on television advertising.

But only 25 percent of the advertising that supported their campaign went to Trump for political reasons, the researchers found. By comparison, every other presidential candidate since at least 2000 devoted more than 40 percent of his or her advertising to political attacks. Nobody spent nearly as much time tracking an opponent’s personality as Clinton’s ads.

Trump, who wasn’t exactly lazy, ran a more typical number of policy-oriented ads compared to previous elections. As an example, the study finds that his first major TV purchase was for an ad titled “Two Americas” – one depicting life under Clinton’s immigration policy and one under Trump’s. The Clinton world is pretty dark. Trumps is rosy. All in all, Factcheck.org gave a moderate review, saying the allegations were based on “dire evidence and misrepresentation”.

In addition to the total ad spend, the study also breaks down the content of the attack ads that are broadcast on behalf of each candidate. It states that around 70 percent of Trump’s advertisements “contained at least a discussion of politics.” About 90 percent of Clinton’s attack reports were directed against Trump as an individual – compared to just 10 percent who followed his policies, the study found. 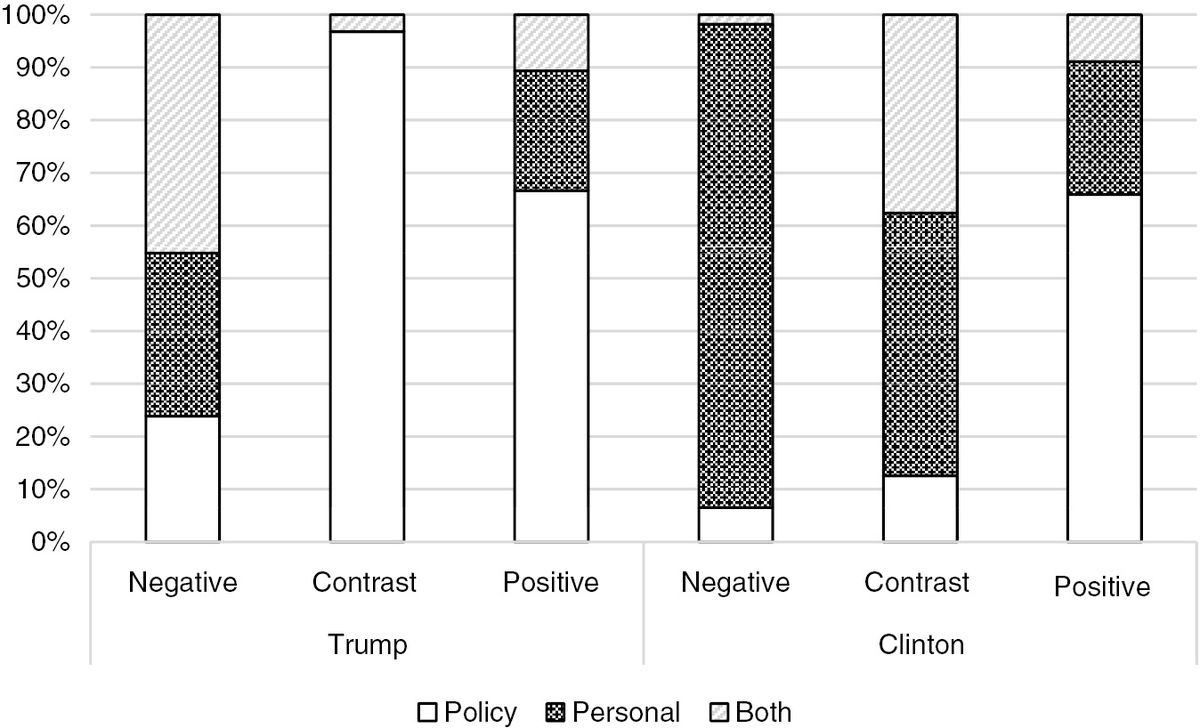 The study concludes that Clinton’s strategy may have backfired. This is what you have to say:

There is evidence that negativity in advertising may counteract the sponsor (Pinkleton 1997) and that personally-oriented, trait-based negative messages (especially those that are rude) tend to be viewed as less fair, less informative, and less important are considered more substantial, policy-based messaging (Fridkin and Geer 1994; Brooks and Geer 2007).

In stark contrast to any previous presidential cycle for which we have Kantar Media / CMAG data, the Clinton campaign has overwhelmingly chosen to focus on Trump’s personality and aptitude for office (in some ways the focus doubled the news media), which left very little room for discussion in advertisements about the reasons why Clinton himself was a better choice.

Trump, on the other hand, provided explicit policy-based contrasts, highlighting his strengths and Clinton’s weaknesses, a strategy that voters say is helpful in decision-making. These strategic differences may have left Clinton more prone to voter backlash and did nothing to overcome the media’s lack of focus on Clinton’s political knowledge, especially Michigan and Wisconsin residents who got policy-based (and especially economic) -focused) news from Trump.

Of course, as Vox’s Tara Golshan pointed out, Clinton’s team likely took that line against Trump because they thought it worked – most polls suggested Clinton would win on election day.

But the new report also confirms what several media outlets have already reported: that the Clinton campaign only realized its vulnerability in the rust belt in the last days of the election, squandering millions that could have been spent elsewhere. Clinton’s team spent virtually nothing on advertising in Wisconsin, Michigan, or Pennsylvania until last week – when they decided to expand their resources there exponentially. 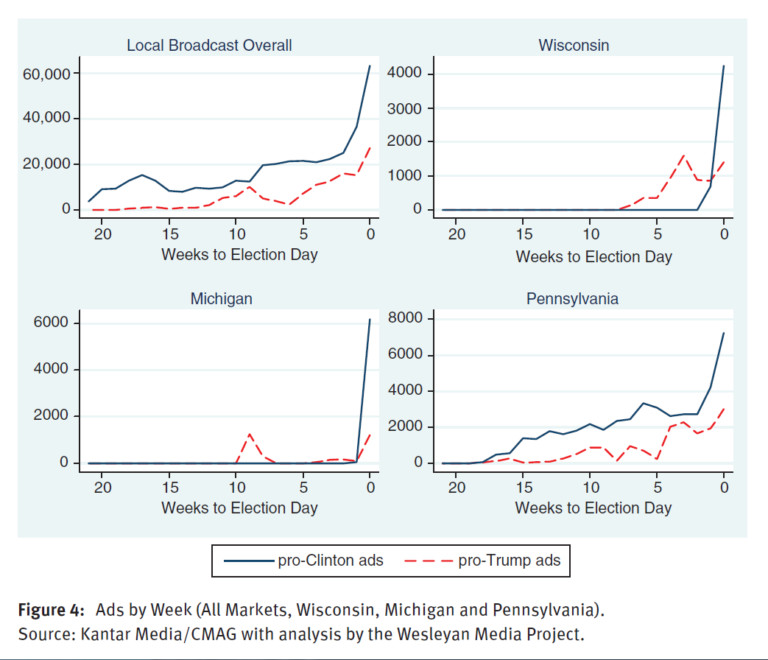 The Wesleyan researchers write with a little understatement:

[I]It may very well be that Clinton misallocated advertising money (both hyper-targeting on local cable and advertising on non-traditional battlefields such as Arizona rather than the Midwest) and a lack of political messages in advertising could do Clinton enough harm have to have made a difference.

The waste of money on television advertising in Arizona was made worse by a soil strategy that the local Rust Belt Democrats have heavily criticized. As Senator Gary Peters (D-MI) Vox said in December 2016, the Clinton campaign seemed to have little to do with the Midwest union workers in the run-up to the vote:

As far as I know, she hasn’t stopped at any UAW halls. I would probably have been invited to be with her if she went to one, and I never got that invitation. She did not conduct any work-specific events that I am aware of. It’s pretty rare that you don’t work closely with the workforce in a campaign, especially for a nationwide office. I’m just sitting here talking to you in the sheet metal workers’ parking lot before their Christmas party. I’ll be with my friends, with the sheet metal workers, to show that I care about them by showing up at their events. Work just isn’t a given in Michigan. Failure to do this type of event was certainly a major oversight.

The new study was conducted by Erika Fowler, a professor in the Wesley administration; Travid Ridout, Professor of Philosophy and Public Affairs at Washington State University; and Michael Franz, Professor of Politics and Law at Bowdoin College. You can read it in full here.

Tags:
Previous Article
We need a lot more than media literacy to fight Covid-19 disinformation
Next Article
Cuba becomes a battlefield in the fake news war