Social networking has grown from a small niche product to a global phenomenon. Social media platforms like Facebook, Twitter, and Instagram are playing an increasingly important role in the modern human experience. For better or worse, social media is here to stay. But how much influence does it have on our lives? How much time do you spend on social media platforms on average?

The answer may surprise you.

Let’s dive into the data and examine how much time we spend on social platforms and what impact that time can have on society as a whole.

How much time do people spend on social media every day?

The global average time of day on social media is 144 minutes, or 2 hours and 24 minutes. Of course, this number varies by country, age group, etc. The following graph shows the average daily usage by continent.

Social media time versus other activities

For example, on a typical day, the average American spends 1.18 hours eating and drinking, 1.78 hours doing household chores including cooking and cleaning, and about 2.81 hours in front of the television.

The average person (among adults in the United States) spends an average of 1 hour and 57 minutes a day on social media. That means we spend more time on social platforms than cooking, cleaning, eating or gardening! 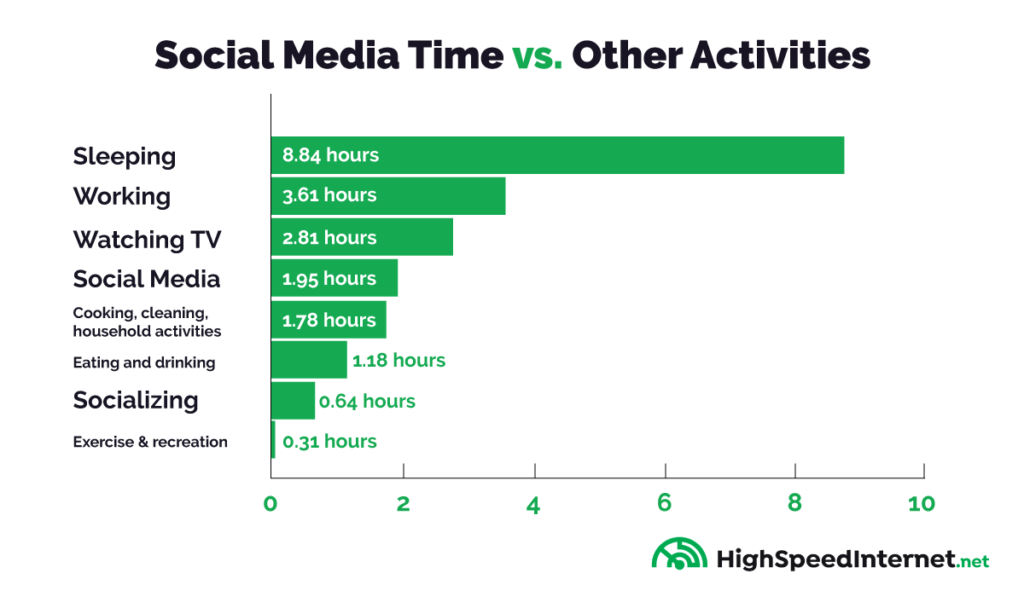 What are the most popular social networks?

Facebook is the world’s largest social network with over 2.6 billion active users. With a world population of around 7.8 billion (including babies, toddlers, and millions with no access to any kind of technology), that number is truly staggering.

In second place is YouTube with just over 2 billion users – however, YouTube is not viewed as a social network by many users.

WhatsApp, Facebook Messenger, WeChat, and Instagram are the other popular social media platforms. Each service has more than 1 billion active users.

Identifying the largest social media services is a little tricky because the definition of “social media” is different. For example, some people see YouTube as a social network, while others don’t. Likewise, messaging apps like Facebook Messenger, WeChat, and WhatsApp may or may not be viewed as real social media services.

The way popularity is measured also varies. Monthly active users are a common measure, but it’s often better to measure how much time people spend on these platforms.

Most social networks are somewhat secretive about their internal data, so we don’t have solid statistics on the average time spent on Facebook, Instagram, Snapchat, or any other social media platform.

However, we have data from some independent studies. An independent analysis by a company called SimilarWeb found the following data:

This data was collected from the average length of stay in social media apps via Android mobile devices (mostly smartphones). It’s not a complete dataset, but it does give us some insight into average social media usage across different platforms. Remember that Facebook users can actually spend more than the listed 58.5 minutes on the network because this data did not track cross-platform usage. Many people use Facebook on both smartphones and their home computers.

The time that is spent on professional platforms such as LinkedIn (e.g. to find a job) and the now defunct Google+ is very little compared to the usual social networks. Newer platforms like TikTok don’t have a lot of data yet, but their average daily usage is skyrocketing.

The majority of social media users use their preferred platforms on a daily basis.

Social media is a major contributor to the average screen time, which has increased dramatically.

The average time spent on social media every day has grown rapidly over the past decade.

Social media started out as a way to keep in touch with friends and family. Its role in our lives has evolved since then.

>>> Don’t miss any news, analyzes and important insider insights from the industry via the Telemedia newsletter. Completely free and released every Thursday – sign up for your copy TODAY

Enteral Feeding Devices Market: A Breakdown of the Industry by Technology, Application, and Geography
admin February 1, 2023

Orthodontics Market is estimated to be US$ 20.0 billion by
admin January 2, 2023

Enteral Feeding Devices Market: A Breakdown of the Industry by Technology, Application, and Geography

Orthodontics Market is estimated to be US$ 20.0 billion by