This analysis of the black population in the United States uses the latest demographic data available. It is based on data from the US Census Bureau’s 2019 American Community Survey, which is provided through the University of Minnesota’s Integrated Public Use Microdata Series (IPUMS).

This analysis relies on self-identification of race and ethnicity in US Census Bureau products to identify the country’s black population. However, a person’s racial and ethnic self-identification may not be fixed and instead may change over time. In addition, the racial and ethnic categories used by the US Census Bureau can change as the nation’s self-image changes. These changes can affect how many people identify as black (or another race). The full methodology can be found here.

The black population becomes more diverse as it grows. Among those who identify themselves as “Black or African American” on census forms, the proportion who say this is their only racial or ethnic identification has declined slightly over the past two decades. In 2019, 40.7 million, or 87%, identified their race as being solely black and their ethnicity as non-Hispanic, while about 3.7 million or 8% said their race was black and some other race (mostly white) and not is Hispanic. Another 2.4 million, or 5%, who identify as both Black and Hispanic or Black Hispanic (although not all Black Hispanics identify as Afro-Latino). These proportions have changed since 2000, when 93% identified their race and ethnicity as black. 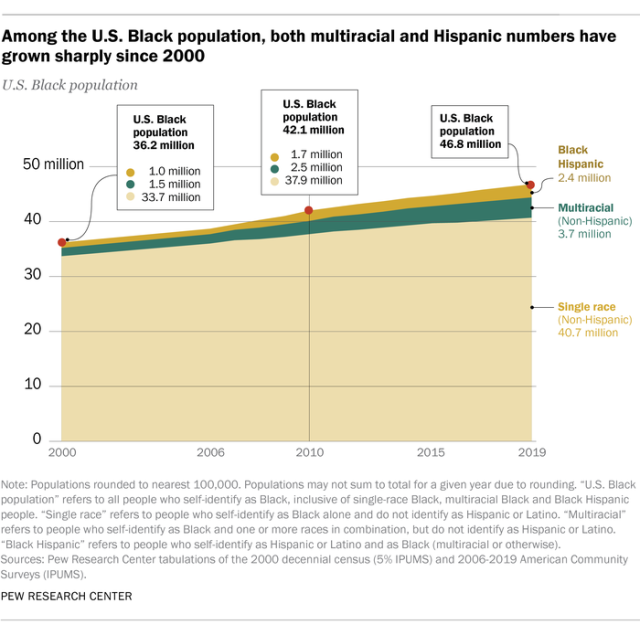 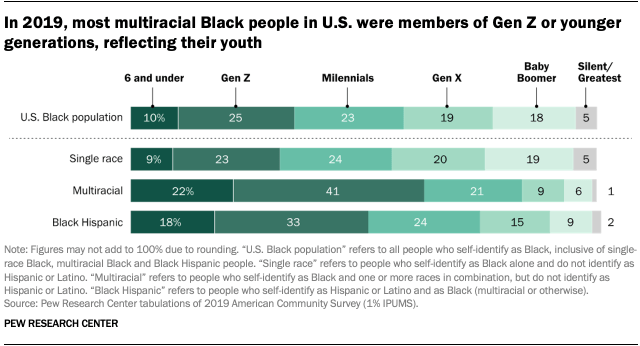 The black population is a little younger when you include those who identify with more than one race or ethnic group. The median age for the entire black population of the United States is 32, although it varies based on the identity of the black population. The average age among black Hispanics is 22 years. Meanwhile, non-Hispanic multiracial blacks are the youngest group, with a median age of 16. 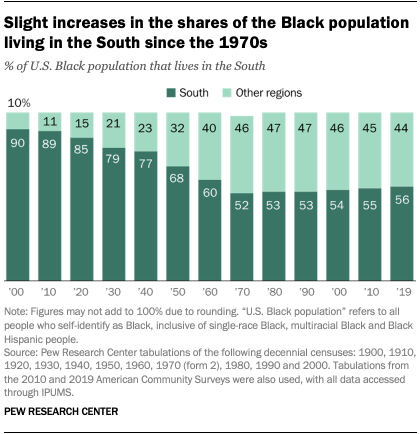 A little more than half of all black people in the United States live in the south, a proportion that has increased in part over the past few decades. The growth of the black population in the south indicates a departure from previous black migration patterns. After the Great Migration began in the late 1910s, growing proportions of the black population lived in regions of the United States outside of the South. But after 1970, the proportion of these people living in the south began to grow, a trend that continues to this day.

There was a similar upward trend in black adults aged 25 and over with a Masters degree or higher. While around 1 million (5% of black adults) had advanced degrees in 2000, that number rose to nearly 2.6 million, or 9%, in 2019.

When it comes to different subgroups of the black population, the multiracial black population has the highest proportion of adults aged 25 and over with a bachelor’s degree (20%) and an advanced degree (12%). Racial black adults and black Hispanics have a slightly lower proportion of those with a bachelor’s degree (14% and 15%, respectively) and an advanced degree (9% and 8%, respectively).

The proportion of black adults aged 25 and over without a high school diploma or equivalent degree has fallen by more than half since 2000 – from 28% of black adults in this age group without a degree in 2000 to 13% in 2019, a decrease of 15 points over almost two decades.

Note: Here is the methodology for this report.

Christine Tamir is a research analyst with a focus on global migration and Hispanic trends at the Pew Research Center.

2021 brought historic breakthroughs for Asians in America, but at an enormous cost
admin March 16, 2022

While the truth is still putting on its shoes, Fake News runs rampant in Latin America
admin December 9, 2021

Don’t America My Australia – The Atlantic

2021 brought historic breakthroughs for Asians in America, but at an enormous cost

While the truth is still putting on its shoes, Fake News runs rampant in Latin America