ÖOn January 16, Facebook announced that it would “ban ads for gun accessories and protective equipment in the US until at least January 22”. For those of us who have watched the world of Trump-supporting social media, this announcement is manipulative whitewash that obscures how Facebook’s algorithms continue to divide people around the world.

As part of my research while working as a consulting producer for Borat Subsequent Moviefilm, I created many social media accounts for Trump. The accounts were a window into the Trump echo chamber where the unpredictable threats and vitriol of radicalized users are terrifying. But as shocking as the posts may be, they make perfect sense when you look at the ads bombarding these accounts. 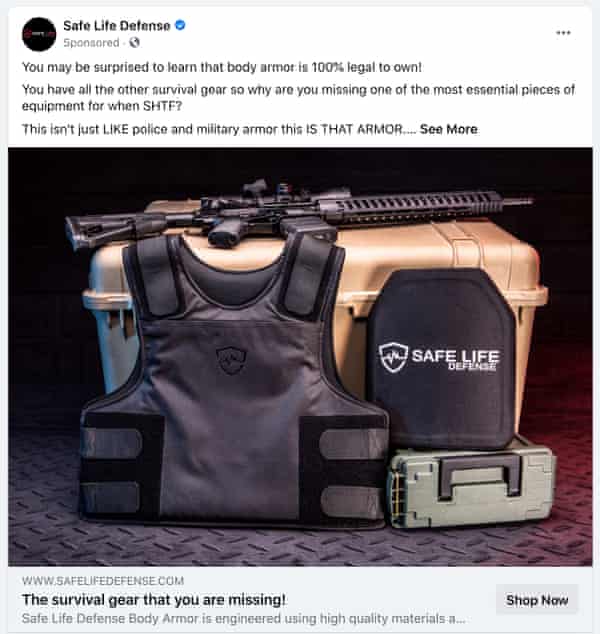 A screenshot of a Facebook ad taken by the author on January 13th. Photo: Igor Vamos

About four out of five ads shown to my pro-Trump profiles sell tactical gear clearly made for combat. This is not a new thing – it has happened since I started looking at these accounts in June 2019, and it probably took a lot longer.

Although guns are not sold, the vast majority of ads still show military-style guns somewhere in their design. An automatic rifle slides into the tactical backpack. The body armor is worn by someone who is actively ready to fire a semi-automatic weapon. A black t-shirt features a picture of a medieval crusader in full armor holding a contemporary pistol, accompanied by a biblical quote: “Blessed be the Lord my rock, who trains my hands for war and my fingers for battle. “

My pro-Trump feeds are personalized ecommerce sites for Capitol intruders. The rare ads that don’t sell tactical equipment or accessories for armed battlefield survival and security products, from upgraded door locks to backup generators. But the fact that you can buy stuff by clicking the links doesn’t matter. What matters is what it means to you to be surrounded by these advertisements. 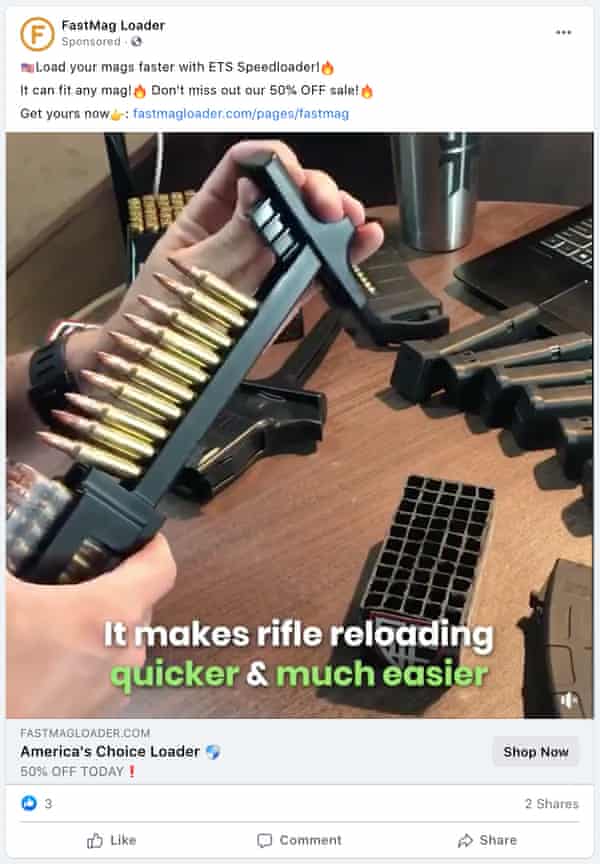 A screenshot of a Facebook ad taken by the author on January 20th. Photo: Igor Vamos

Facing Trump on Facebook takes me back to my Cold War childhood in the early 1980s. I was fascinated by the magazine Soldier of Fortune, which was a window into the seedy underworld of romantic mercenary fantasies. I had to wait to read copies my friends had bought. (My father, who survived the Holocaust, disapproved.)

The Soldier of Fortune pages focused on mercenary life stories, combat tactics and, most excitingly, a classifieds section for guns and supplies, body armor, mail order brides and even hit men. It was only a magazine, but it was held responsible in U.S. courts for contract killings and injuries resulting from the magazine’s classified ads.

But today this universe seeks and surrounds you. When you first join Facebook, you make some decisions on your own. But soon the algorithm begins to narrow down your options and decide what other options to be presented to you. As many of us rely on a limited number of news sources to fill our social media feeds, our information universe is becoming more and more niche. For Trump supporters, this universe is often paramilitary.

According to a 2018 Pew study, seven in ten US adults are on Facebook, and about half of all Americans visit the platform on a daily basis. Those who have liked and shared pro-Trump posts, or who have mostly pro-Trump friends, are bombarded with fear- and aggression-fueled advertisements warning them not to store guns and supplies. Most of the trails featured lead deeper down the rabbit hole. Few lead out.

The problem we face as a society is not just fake news or political advertising. It’s the math that drives the whole system. The platforms claim that their advertising algorithms give us what we want. This may be the case with the first few clicks or friends, but the algorithm very quickly takes control. Like the Pied Piper, he leads us to a land of extremes. 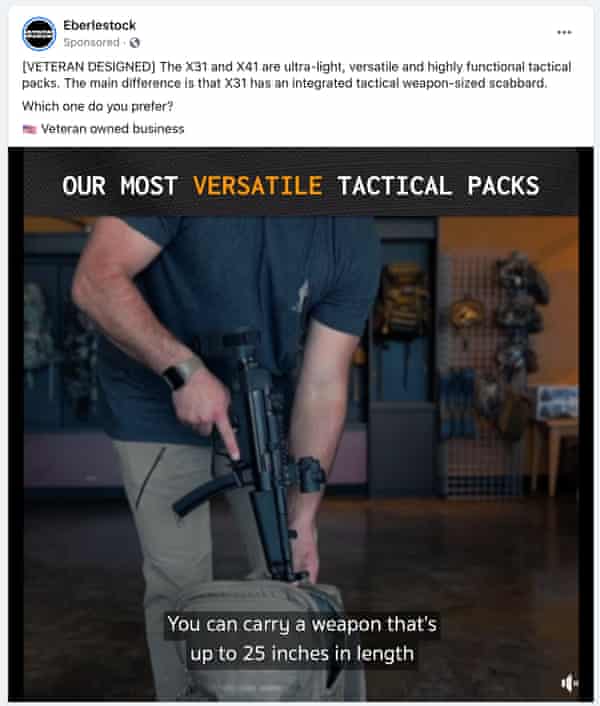 A screenshot of a Facebook ad taken by the author on January 13th. Photo: Igor Vamos

The effects of being trapped are psychologically intense. A few months after maintaining my online identity as Trump, I felt like I had to buy guns. I knew it was irrational and impractical as I had no training and my urban lifestyle. Still, I was convinced I needed her. When I told my friend, her amazed reaction made me realize how deeply my mind had been manipulated by my Trump Facebook feeds.

Facebook’s account bans have been dominating the news lately, but its advertising algorithm has received far less scrutiny.

Ad revenue is the lifeblood of platforms like Facebook and Twitter, and ads from companies selling military equipment are key to creating the hateful communities we see online today. To change the violent online world that Facebook created for Trump’s Army, the algorithms themselves, the basic architecture of Facebook advertising, must change – a market that is expected to generate nearly US $ 100 billion for the company in the coming year -Dollars will bring in.

There are corrections, but it’s not about banning things. Facebook already bans ads for guns, ammunition and explosives. The permanent extension of the ban to tactical equipment only opens a can of worms. How do you decide what is tactical and what is not? It would just be another attempt at treating the symptom rather than curing the disease on its own.

Better than prohibiting more things would be to check how the algorithm makes its suggestions and find a solution that offers more ways out of the rabbit hole than in. Optimizing algorithms so that they still offer diversity and diversity is just an idea. If they want to monopolize people’s media consumption, they should provide common ground.

But maybe we can be more ambitious and try to develop technologies that build society. Can our algorithms put love above hate? Can we create equations that speak to our humanity instead of taking advantage of our fears?

The Biden government needs to set up a task force to address the problem. The regulation of the media in the public interest has a long history. If we allow social media companies like Facebook to accelerate the division further, democracy will simply bleed to death.

Roblox jumping into ads in effort to diversify beyond virtual goods
admin September 26, 2022

Gubernatorial candidates shell out millions in cash for ads

Roblox jumping into ads in effort to diversify beyond virtual goods