‘This was Black Camelot’: looking back on Obama’s journey to the top | Documentary

The date was 10 February 2007 and the air was cold. Barack Obama, a US senator without deep political experience, stood before the old state capitol in Springfield, Illinois, where Abraham Lincoln began his career, and announced his daring candidacy for president of the United States.

But on that same day, a State of the Black Union conference was taking place in Virginia. Al Sharpton, a civil rights leader and former presidential candidate, told the gathering: “I wish Obama had announced here ’cos Lincoln did not free us. The abolitionist movement freed us. We’ve got to quit giving the wrong people credit for our history.”

The audience erupted. It was an early glimpse of the endlessly complicated path between identity politics and respectability politics that Obama would navigate as a Black politician in America. That journey is charted in Obama: In Pursuit of a More Perfect Union, a compelling three-part documentary directed by Peter Kunhardt and showing on HBO from Tuesday.

Obama’s presidency feels both like yesterday and like a lifetime ago. With hindsight, he appears even more of a one-off than he did back then, and not just because of his unusual name. Turning 60 on 4 August, he is 15 years younger than predecessors Bill Clinton, George W Bush and Donald Trump and 18 years younger than successor Joe Biden.

He is always called the first Black president rather than the first biracial or mixed race president. His father was from Kenya and absent from his upbringing; his mother was from Kansas. He was born and raised in Hawaii and but also spent formative years in Indonesia. He studied in Los Angeles, New York and Cambridge, Massachusetts, before settling in Chicago.

Part one of the documentary explores how these experiences shaped Obama’s character and worldview, giving him the sensibility of an outsider and ability to make connections, bridge misunderstandings and walk in someone else’s shoes. He also credits his mother for the gift of empathy (a trait notably present in Biden and absent in Trump).

This background made him a different political proposition, able to make the claim that he could hold together the different strands of American life. He said in an interview early in his candidacy: “I am rooted in the African American community but I’m not defined by it. I am comfortable in my racial identity but that’s not all I am.”

“A person from an Ivy League school could look at him and see someone like themselves. A person who considers themselves intellectual and above the fray of typical partisan politics and see someone who did not want to be mired in what we thought was the old type of politics. So he had that incredible surface area to his benefit.”

But there was always a tightrope to walk. Obama exploded on to the national political stage at the 2004 Democratic convention with a speech that now seems to have an inverted prescience about the nation’s divisions. “Now even as we speak, there are those who are preparing to divide us, the spin masters and negative ad peddlers who embrace the politics of anything goes,” he said.

Cobb, who like many others first came across Obama that night, recalls: “This idealism that didn’t really square with reality, most notably when he said there’s not a Black America or white America or Latino America, there’s the United States of America, which is patently untrue. Obviously, that was untrue but the way in which it was untrue was more interesting than the veracity of it.

“What he was doing was speaking aspirationally, even though everyone in that auditorium knew that there was a Black America and a white America and a Latino America and all these various people whose relationship to the country is mediated by their identity. They very much aspire to a day when those things would not be the case. He was articulating a vision which I thought made him a really intriguing figure.” 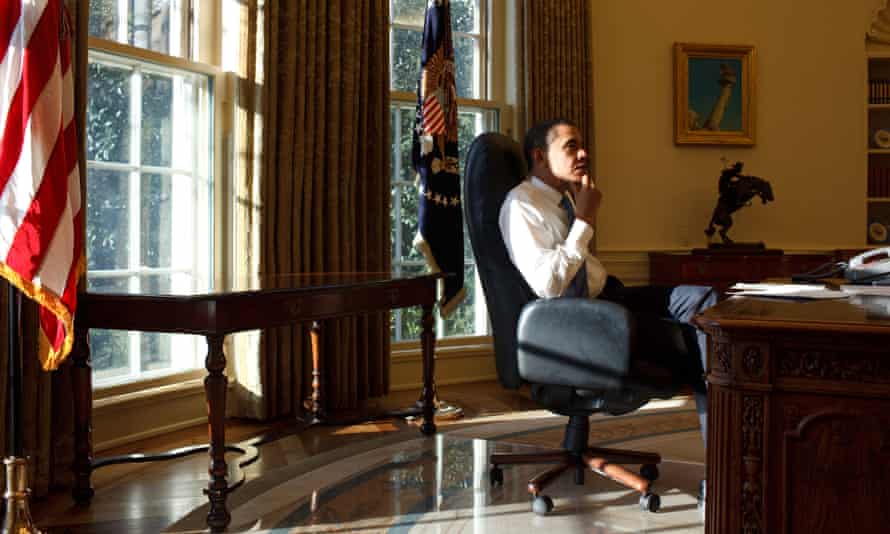 Then came the 2008 Democratic primary campaign against Hillary Clinton. The film features a rare interview with Obama’s firebrand pastor, the Rev Jeremiah Wright, who recalls his bewilderment at being sidelined from the announcement in Springfield because he could be “over the top sometimes” and might upset white voters in Iowa.

Obama’s embrace of Lincoln fit a mainstream narrative of American history. Some Black commentators understood the political calculation to avoid alienating white voters. Others were wary of what they saw as an example of white saviour complex.

Academic Michael Eric Dyson tells the film-makers: “Black leaders were kind of resentful because he kind of did an end run around Black leadership. Most Black people who rise in Black communities have to come through and kiss the ring of the Black political dignitaries and potentates. Obama leapfrogged over them.”

But as Obama’s candidacy gathered momentum, Black leaders could see the people were moving towards him. Dyson adds: “Black people are practical. We’re no longer interested in symbolic politics, run as a reaction to white supremacy, run as a candidate who will protest. No, we want real people who are able to really win.”

The film is haunted by the words “not Black enough”, as some had asked whether the mixed-race Obama, not a descendant of enslaved people, was an “authentic” member of the African American community. Obama deftly noted at the time that, when walking on the south side of Chicago, it was not a question he got asked much.

The film highlights an illustrative moment on the campaign trail in South Carolina. Cobb explains by phone: “He makes fun of a guy’s shoes at a barbershop, which is a Black male cultural stronghold. He knew he was fluent in the language of the barbershop, You’re going to joshingly talk about this guy’s shoes, you’re easy in your own skin. For people who had questions about who he was that was an identifier. ‘OK, he’s this guy, he knows us, he speaks our language and so on.’

“But then there is the fact that he is married to Michelle Obama who did a lot to familiarise him. If people thought his identity was exotic and cosmopolitan and global and these other things that they didn’t typically associate with black identity, then they understood exactly who his wife was. She was a very familiar entity.”

But the biggest crisis of the campaign erupted when the media compiled past comments from Wright about American imperialism in language too incendiary for many Americans to stomach. The pastor was on a cruise ship at the time, beyond the reach of the baying media pack, but fellow passengers saw it all on the TV news. Wright says in the documentary that a white family asked to be moved so they would not have to sit next to him at dinner. “That became for us the cruise from hell.”

Obama memorably confronted the issue head on with a speech in Philadelphia about race that did not concede defeat nor throw Wright under the bus. Instead his professorial instinct kicked in. For Cobb, it was a case of stepping into the middle of the issue, looking at it panoramically and trying to understand it lucidly. And this masterclass worked. Obama rode out the storm and beat Clinton to the nomination. 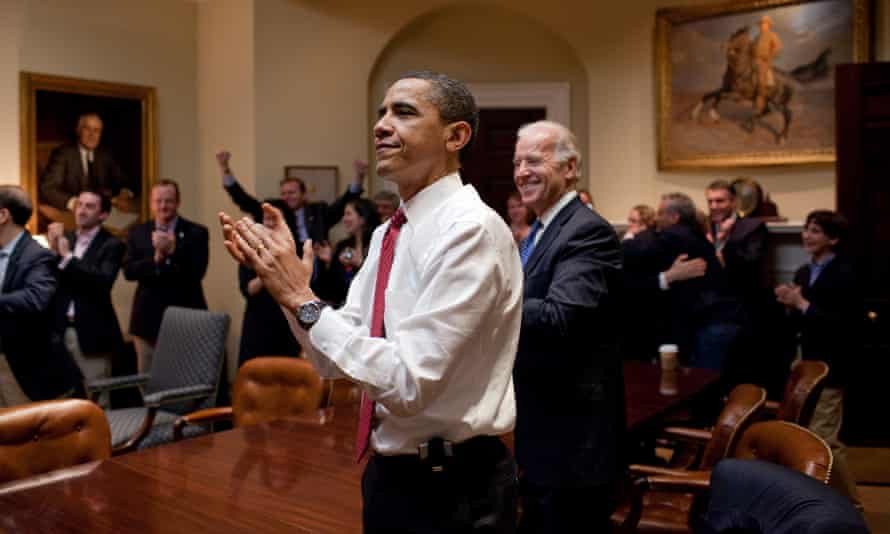 When it came to his coronation at the Democratic national convention in Denver, there was another twist on identity. Former nominee John Kerry introduced Obama’s great-uncle, Charles Payne, a second world war veteran … and white man. He rose and waved with Michelle Obama at his side. The crowd went wild.

Cobb recalls: “It was brilliant. John Kerry gave an acknowledgment of Barack Obama’s uncle and this wizened, elderly white man stands up. All the Black people I was with howled with laughter because they knew exactly what he was doing which was kind of cynically deploying the idea of race – race is a cynical concept – and so he was riffing on the idea of it.

Obama went on to defeat the Republican John McCain in the general election and tell tens of thousands of supporters in Chicago’s Grant Park: “Change has come to America.” The White House, built by enslaved Black people, would now be home to a Black president.

The author and journalist Ta-Nehisi Coates tells the film-makers: “Rappers and basketball players: that was the range in which Black men existed in the pop culture for the most part. That was it. It was really something beautiful about seeing something else. This was Black Camelot. How much more American could we get than this?”

Others were eager to make hopelessly idealistic claims of a “post-racial society” – which Obama’s presidency would spend the next years disproving. The third episode tells how he was constantly trying to thread the needle of being a black president but not a Black president, finding that when, for example, an unarmed African American was shot by police, some would criticise him for speaking out too forcefully, others for not speaking forcefully enough.

Cobb comments: “It was a damned if you do, damned if you don’t situation for him. The most idealist possibilities governed the campaign and, in some ways, the most sceptical ones governed the presidency. And so everything that he did was wrong or, to some portion of people, it’s going to be wrong. Navigating that, I don’t think that anyone could have come through it unscathed.”

In Washington Obama staved off economic depression and passed the Affordable Care Act, known as Obamacare, but ran into a red wall of Republican opposition and obstruction beyond a typical presidency. His very existence, shattering the myth of white men’s exclusive right to the nation’s highest office, also regenerated some of the darkest impulses in American society. 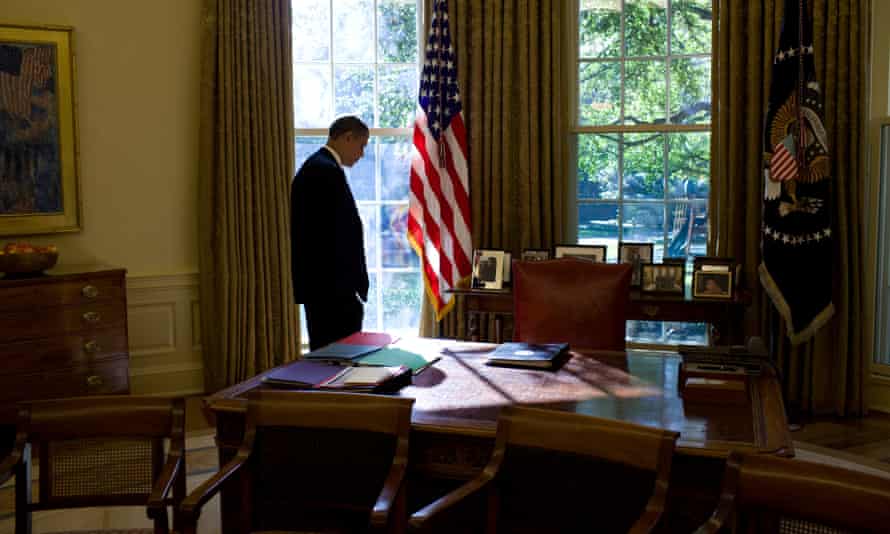 Celebrity businessman Trump seized on and amplified the big lie of “birtherism”, falsely suggesting that Obama had not been born in America and might be a Muslim. Looking back, this film reminds us, all the seeds of polarisation, disinformation and raw racial backlash were there during Obama’s presidency. Trump channeled those forces with reptilian intelligence and transmogrified into the anti-Obama. It won him the 2016 election.

Cobb reflects: “Without Obama, there is no Donald Trump. It didn’t say anything about America that we didn’t already know. We knew that there would be a pushback but still, seeing it was incredibly disheartening.

“Even though Hillary Clinton lost the election, after Obama came out and gave the statement about Trump being the next president, I wrote a piece that was titled ‘Barack Obama in defeat’ because the resurrection of the kind of racialist politics that Trump represented was a defeat of the idealism and racial progress that Obama had been hoping to promote.”

But there was a resistance to the resistance. A diverse caucus of Democrats won back the House of Representatives and, last year, Biden took the White House with Kamala Harris becoming the first Black female vice-president. Does Cobb expect to see another Black president any time soon? “I would not hold my breath,” he replies.

Obama: In Pursuit of a More Perfect Union does not feature new interviews with Barack or Michelle Obama. But there are rich pickings in archival clips offering snapshots in time. In one old interview, Obama is asked if he thinks there is a difference between Black patriotism and white patriotism.

No, he does not, but he elaborates: “What I think is that the African American community is much more familiar with some of the darker aspects of American life and American history. I think that they understand America much less as a marching band playing John Philip Sousa. They understand America much more as a jazz composition with blue notes and I think those are different things and so the African American community can express great rage and and anger about this country and love it all the same.”

Why dermal fillers are becoming more common for black women