Media literacy in the age of fake news

After several years of fake news and alternative facts, media literacy is still a challenge. The Learning and Prototyping Report 2018 showed that news consumers believe they are better at media literacy than they actually are. How can libraries help fill this gap and inform their communities?

Librarians can ensure clients make informed decisions in local, state, and national elections by helping them think critically. Libraries of all types can promote media literacy by providing handouts, LibGuides, training courses, and programs to separate fact and online fiction. The following resources can help.

The National Association for Media Literacy Education, a not-for-profit organization based in New York City, defines media literacy as the “ability to access, analyze, evaluate, shape, and act on all forms of communication,” including “technologies, that we don’t have ”. even dreamed of it. ”It provides tutorials for educators and parents, lesson plans, and elective materials. The California-based Center for Media Literacy offers a MediaLit kit to assist educators in creating media literacy teaching programs for all disciplines and grade levels.

Americans tend to refer to statements that they agree with as factual and those that they disagree as opinions.

Between 2017 and 2018, the American Library Association (ALA) partnered with the Center for News Literacy (CNL) at Stony Brook (NY) University School of Journalism on “Media Literacy at Your Library,” a pilot program that trained library staff to to help adults become better news consumers. The aforementioned Learning and Prototyping Report describes how five US public libraries used CNL’s media literacy curriculum to develop public programs tailored to their communities. Among the discoveries made by these libraries, young and marginalized audiences were the hardest to reach, and future efforts might be more effective if programs were hosted in spaces more accessible to those audiences.

Although the program has ended, the ALA Public Programs Bureau has received a National Leadership Grant of $ 249,378 from the Institute for Museum and Library Services to convene a group of librarians, educators, and journalists to develop a guide to the Mediation of media literacy will create. Further details will be announced by the end of the year.

A cornucopia of courses

In July, RAND Corporation published a survey on the effectiveness of media literacy training in K-12 classrooms, Exploring Media Literacy Education As a Tool for Mitigating Truth Decay. The researchers found that media literacy skills are defined and assessed inconsistently across disciplines, making it difficult to assess the results. However, the survey provides a separate attachment in a ZIP file with a comprehensive list of courses, programs, and other resources organized by institution.

An open access course – developed by biologist Carl Bergstrom of the University of Washington and computer scientist Jevin West – has attracted nationwide attention. The course, titled Calling Bullshit, has a curriculum, videos, tools, case studies, and FAQ for educators who wish to customize it. Bergstrom and West define “bullshit” as “language, statistical numbers, data graphics and other forms of presentation that are supposed to convince by impressing and overwhelming a reader or listener with a blatant disregard for truth and logical coherence”.

The aim of all media literacy education is to help children, young people and adults recognize misleading claims on the Internet and in other media. Although often referred to as fake news, misinformation can take many forms. In 2016, Melissa Zimdars, Assistant Professor of Media Studies at Merrimack College in North Andover, Massachusetts, and co-author of Fake News: Understanding Media and Misinformation in the Digital Age (MIT Press, 2020), identified numerous categories of for her students Web sites containing suspicious information, including sources that:

A 2018 poll by the Pew Research Center shows that Americans tend to refer to what they agree with as factual and what they disagree with as opinion. A 2019 study by Ohio State University psychologists suggests that people distinguish between dishonest and biased sources. The researchers found that even accurate news, when reported by a source believed to be biased, tends to lose credibility. 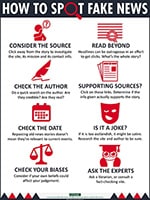 A widely used source for detecting bias, How to Spot Fake News by Eugene Kiely and Lori Robertson, was published in November 2016 by FactCheck.org, a project of the Annenberg Public Policy Center. An infographic from the International Federation of Library Associations and Institutions (free in multiple languages) summarizes the eight news source rating techniques mentioned in the article. In 2016, Finland was one of the first European countries where its education system officially emphasized critical thinking and the ability to recognize disinformation.

Misleading information is often difficult to combat because viral memes are often translated into other languages, cross national borders, and skip platforms, according to Daniel Funke, author of journalism website Poynter. Indiana University Bloomington information scientists in 2017 confirmed that social bots and algorithms are responsible for spreading viral stories – some fake, others real – via Twitter.

To make matters worse, conspiracy allegations are no longer based on actual conspiracy theories. Russell Muirhead and Nancy L. Rosenblum write in A Lot of People Are Saying (Princeton University, April) that factual statements have been replaced with allusions: “There is no awkward demand for evidence, no exhaustive collection of evidence, no points that stand result in a pattern. ”Instead, the statement that“ many people say something ”is used as an authority.

A good overview of fake news for librarians is Joanna M. Burkhardt’s “Combating Fake News in the Digital Age,” Library Technology Reports, vol. 53, no. 8 (Nov./Dec. 2017). Burkhardt, who regularly lectures on media literacy, presents a brief history of fake news starting with the Roman Empire, explains how misinformation spreads, and suggests proactive methods that librarians can use to help students navigate the information universe. Burkhardt is also the author of Teaching Information Literacy Reframed (ALA Neal-Schuman, 2016), which uses the Framework for Information Literacy for Higher Education as a tool for designing classroom exercises in media and other literacy. 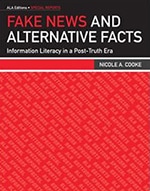 Nicole A. Cooke shares tips for creating a lesson plan to help college students and adult patrons evaluate media in the ALA special report, Fake News and Alternative Facts (ALA Editions, 2018). Belinha S. De Abreu’s second edition of Teaching Media Literacy (ALA Neal-Schuman, 2019) brings together 15 librarians and teachers to express their views on media and digital literacy issues. It also offers six ready-to-use lessons, a glossary, and a timeline of media literacy milestones. Information Literacy and Libraries in the Age of Fake News, edited by Denise E. Agosto (Libraries Unlimited, 2018), is another excellent round-up of media history and research aimed at combating misinformation.

Finally, those interested in the historical roots of the current controversial political climate can read “The Lies Factory: How Politics Became a Business” by historian Jill Lepore in the September 24, 2012 issue of New Yorker. Lepore writes about Clem Whitaker, Leone Baxter, and their advisory group, Campaigns Inc., which they founded in the 1930s. “Whitaker and Baxter weren’t just inventing new techniques; they wrote a rule book, ”she argues. This set of rules, outlined in Whitaker’s speech to the Los Angeles Chapter of the Public Relations Society of America on July 13, 1948, contains advice that is the voice of the people in political campaigns of the 21st, “attack, attack, attack” and “say the same thing over and over”.

Influencers With Tourette’s Find a Niche on TikTok
admin July 20, 2021