From news articles to advertisements and even textbooks, people are exposed to thousands of media messages daily, with a barrage of mis- and disinformation flooding newsfeeds constantly. Despite our voracious media consumption, it’s still not the norm to teach students how to navigate and think critically about the minefield of information they’re presented with daily, the same way they are taught reading, writing, science and math. When media literacy programs are implemented, sometimes they themselves require a degree of media literacy to analyze.

According to Media Literacy Now, a national organization that lobbies to get media literacy education language into legislation and into the classroom, 14 states have media literacy language implemented into their education standards. Its 2020 progress report notes that only two states—Florida and Ohio—have strong statutory language on media literacy that mandates its implementation into the curriculum at all grade levels.

In most states, districts are not very far along in implementing these plans, Media Literacy Now founder and president Erin McNeill said. “There are a few states that have passed something,” she said:

That doesn’t mean that, “Oh, we’re done now. Curriculum is coursing through the veins of the schools.” No, usually it’s just the first step. Some of the states are moving on to the next step, which might be funding for professional development.

Media Literacy Now’s goal is not to necessarily impose national media literacy education standards, but rather to empower teachers, districts and states to integrate it as an essential component of a well-rounded education, McNeill said. Nor does Media Literacy Now design curricula, though it partners with organizations, like Project Look Sharp at Ithaca College, that do.

But not all media literacy curricula are created equal. Over the past few years, snappily titled tools and courses like Making Sense of the News, offered by the for-profit online learning company Coursera, and the News Literacy Project’s Checkology have found their way into classrooms. Many programs like these are actually funded by large corporations and feature advice from corporate news outlets that uphold simplified, status quo standards of “objectivity” without teaching students how to analyze power dynamics, profit motives or their own internal beliefs and biases (FAIR.org, 11/18/19). 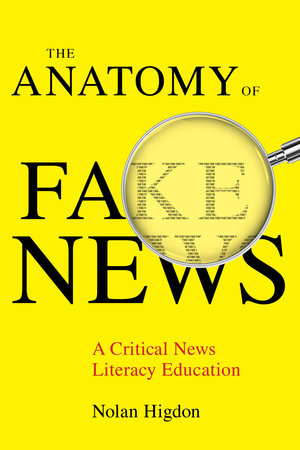 Nolan Higdon, author of The Anatomy of Fake News: A Critical News Literacy  Education, board member of the Action Coalition for Media Education (ACME) and history and media studies lecturer at California State University, has been a prominent figure in the news literacy space. Much of his work analyzes how corporate ideologies dominate news media—and news literacy programs. Says Higdon:

There are a lot of groups that advocate for “media literacy,” but really what’s behind them is corporate dollars, trying to get corporate software and corporate products in the classroom to get students familiarized with them.

Programs like these can also be lucrative for Big Tech, and might be mining students’ data while they click away. With homes now becoming classrooms and offices as a result of Covid-19, the issue of privacy is even more prominent. Even “free” tools may come at the cost of your data.

“The content kind of normalizes this corporate market outlook on life,” Higdon said.

Most educators and institutions don’t even know what media literacy is, and most states don’t even have laws mandating it in schools, so until we get to that place, it doesn’t matter if it’s corporate or critical—it’s not happening.

The reason media literacy legislation is not the norm across the country is not because lawmakers are against it; McNeill said it often receives bipartisan support. Instead, the issue lies more in the limited time of state legislative sessions, and a lack of prioritization of these bills. In New York, for example, two nonpartisan media literacy-related bills have been in limbo since 2019, and another since 2017. New York will start a new two-year session in January, requiring reintroduction of these bills.

As McNeill said, turning these bills into laws is just the first hurdle. Professional development for the teachers teaching these materials, and developing the curriculums themselves, are both crucial next steps. Also, legislation is not the only vehicle with which to get media literacy programs into the classroom; state and local departments of education can also convene expert groups to help them develop their own curricula. 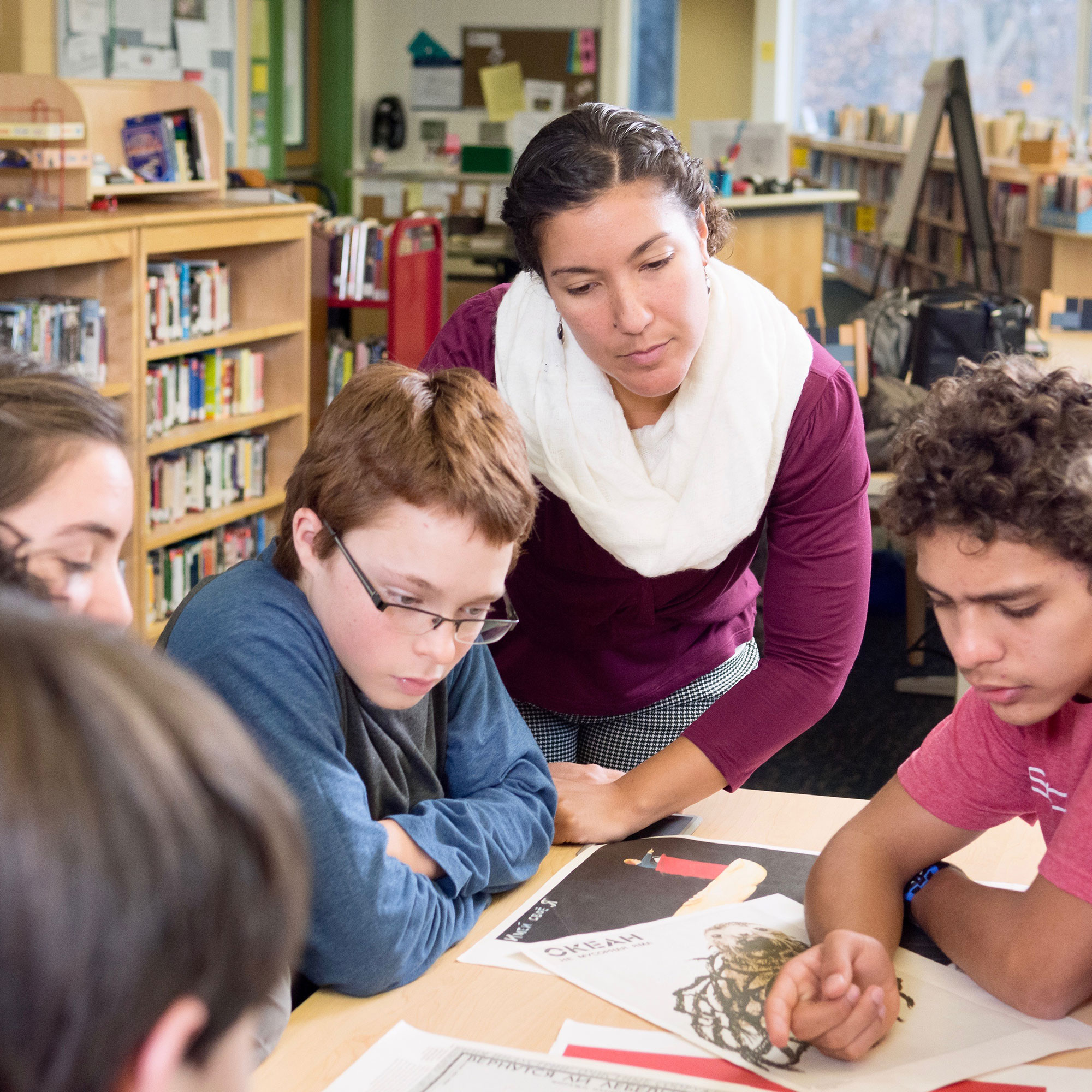 Project Look Sharp’s materials are aimed at teaching questions-based media analysis, said Cyndy Scheibe, its executive director and founder, who’s a psychology professor at Ithaca College. “Ask questions about the media you see. Including what’s left out. Including who might benefit from, who might be harmed by, this message,” she said.

Instead of telling students what to believe as “right” or “wrong,” effective media literacy programs will encourage students to ask questions themselves, said Chris Sperry, director of curriculum and staff development at Project Look Sharp.

Sperry suggested students should be trained to ask questions of any piece of media, from history textbooks to Facebook posts, such as:

Solid media literacy organizations will uphold the transparency they teach by listing their own funders. Certain lessons may also allow students to do some of their own journalism. “When you do interviews yourself, do the research, you start to understand that a lot gets left out,” McNeill said.

What gets left out of media messages can sometimes be as important as what’s left in.  Take Howard Zinn’s A People’s History of the United States, recently scorned by President Donald Trump and Vice President Mike Pence for making Americans feel “ashamed of their own history,” because it reveals the sides of dominant American narratives often left out of mainstream textbooks. (Zinn reviewed and praised Project Look Sharp’s materials prior to his 2010 death.)

One of Look Sharp’s lessons looks at two documentaries about the building of the Panama Canal: A PBS documentary clip that gives a seemingly thorough overview of its construction, and another independently made documentary, The Panama Deception, which discusses how Jim Crow was introduced to Panama through the building of the canal—information the first documentary left out. Students are prompted to question why one documentary would completely omit this facet, while another focuses on it. 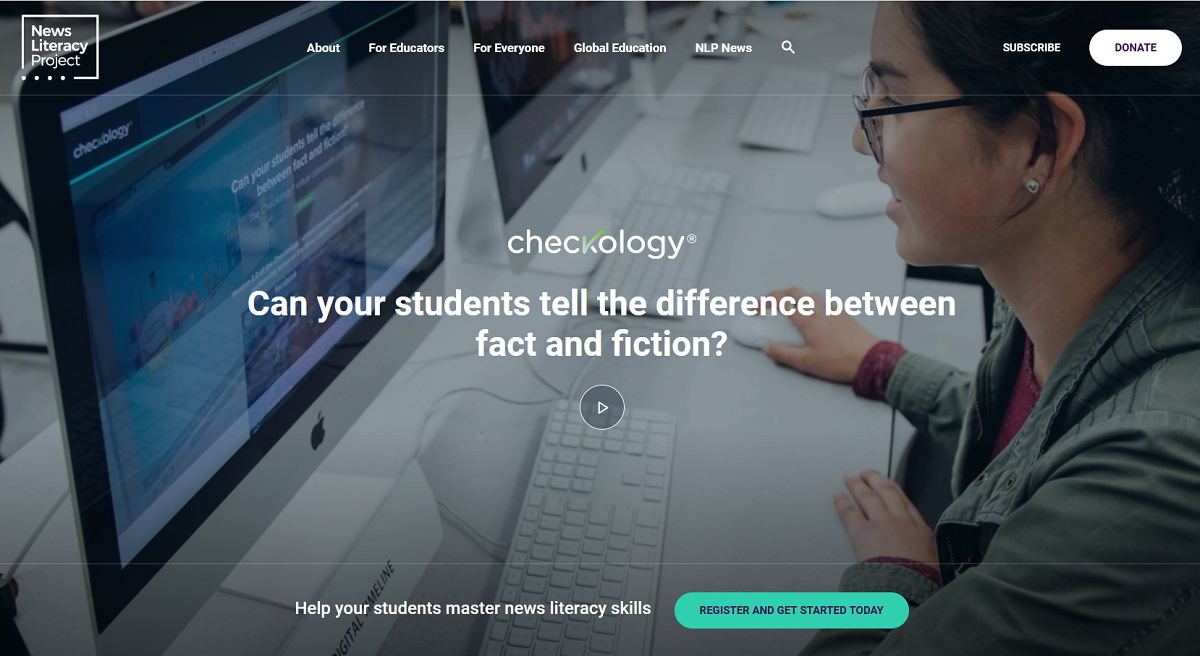 Some so-called media literacy lessons, like the aforementioned Making Sense of the News and Checkology, do more to bolster the image of corporate media than to teach students critical thinking. Higdon said some red flags include taking corporate funding or being a product of corporations (like Checkology having journalists from NBC, the Washington Post and Univision Noticias introduce lessons), or encouraging the use of one platform ( like Facebook or Instagram) to gather information.

News and media literacy lessons also need to focus on how power dynamics are reflected in the news and other media messages. “It’s also the ways they talk about media,” Higdon said:

If they don’t cover the expressions of power in media—if you’re not talking about who funds it, what’s the ideology, what identity groups are represented, who gets a voice, who doesn’t get a voice—if those sorts of things aren’t being asked of media content, looking deep down into power dynamics, that’s surely a sign of corporate media literacy.

The problem with lessons about media literacy coming from the mouths of corporate talking heads is exacerbated by the elitist pipeline that leads many reporters from Ivy League schools, to political spheres and eventually to journalism. Noted Higdon:

Journalism became quite professionalized—and especially in corporate media, now the people who pass for journalists…tend to come from the same Ivy League schools and backgrounds of the people they’re covering in the political class. It was different in the pre-1980s. The journalists were working-class stiffs who wanted to stick it to elites, and now they’re coming from elite institutions, in many cases, and they want to rub shoulders with elites.

When the people telling the stories tend to be elite, white, Washington-adjacent men, their accounts are often constricted by a class- and identity-biased lens. They might also create false dichotomies that fail to encompass the complexity of experiences and opinions around the country, said Higdon:

Democrats versus Republicans—those are the only two choices. And it’s this lazy sense of journalism, which is, “OK, I’ll talk to a Republican; I’ll talk to a Democrat. The viewpoints of all 330 million Americans have all been covered on this topic.”

Underrepresentation or negative representation of women, people of color, LGBTQ people and people with disabilities perpetuates injustices that corporate media literacy programs that vaguely refer to “representation” will miss. For example, “Black” stories told by elite white men should be scrutinized. Said Higdon:

The myth of objectivity

The status-quo idea of journalism—get a source from each side and report them neutrally—is oftentimes a myth. The truth does not lie simply in the middle of left and right. Said Project Look Sharp’s Sperry:

Our work is very much about teaching critical thinking from all different perspectives and points of view, but being conscious of the power structures in society, and that no media message is neutral and we can’t approach it in those ways.

Any organization promoting media literacy that talks about things like being unbiased has no credibility from our perspective. All media has a bias and a point of view, and often the idea of being unbiased is an idea that supports that status quo.

Another concept to look out for is relativism—that every opinion in a situation should be weighed equally. In a story about the Holocaust, a Holocaust denier should not be given the same platform as a Holocaust survivor: One’s opinions are based in bigotry and conspiracy, and the other’s are based on experience and facts. Or, in more recent news, someone who believes election fraud led to President-elect Joe Biden’s victory should not be given the same treatment as someone talking about the record number of voters this year—because there is no evidence of election fraud. Simply put, not every “side” to a story is valid or true.

The hope of genuine media literacy programs is that questioning how structures of power relate to how stories are portrayed will lead to a more socially aware and engaged public. “We see media literacy as core to social justice and democracy and core to sustainability,” Sperry said.

Literacy of any kind is powerful, because understanding tends to lead to action. A society that’s taught to question the types of media it consumes, where it comes from and what stakeholders and power dynamics are involved is fundamentally more democratic, he added:

Ultimately, democracy needs to be about the agency of citizens and people, and their ability to create their worlds, and a central part of that is the ability to read their worlds, to analyze and evaluate and name what’s working well and what’s not working well in society, and to have a sense of capacity to make change.

FAIR’s work is sustained by our generous contributors, who allow us to remain independent. Donate today to be a part of this important mission.

Tags:
Previous Article
With less advertising on streaming, brands make more movies
Next Article
Why everyone on Facebook is angry about their political advertising guidelines

Spotting fake news in real-time after it was created from our content
admin April 23, 2022

Creative Works: the 10 most popular ads created under lockdown

Why everyone on Facebook is angry about their political advertising guidelines
admin July 18, 2021