How To Teach Kids Media Literacy

As conspiracy theories, “fake news” and misinformation flood the internet, it’s clear that media literacy is an essential skill people need to develop now more than ever.

While the endless barrage of content may feel overwhelming, parents play a vital role in giving children the tools they need to navigate the modern media landscape and become critically informed consumers.

“Media heavily influences how we think and make decisions. Media literacy develops the ability to access, analyze, evaluate and produce communication in a variety of forms and helps kids learn about what is credible and understand the difference between fact and fiction,” Maggie McGuire, CEO of the kid-focused streaming service Pinna, told HuffPost.

“Media literacy aims to help kids become wise consumers of media, develops critical thinking skills, and helps kids express and disseminate their ideas clearly based on evidence and facts,” she added. “It’s critical to developing citizenship skills that lead to kids knowing how to engage in healthy and fair public debate and participate in a democracy as they grow.”

So how exactly can parents go about raising informed and responsible digital citizens? Below, McGuire and other experts share their advice.

“The amount of time that children dedicate to screen time and the age at which many kids start to engage with digital devices makes the need for parents to introduce media literacy at a young age greater now than ever before,” said Dean Cantu, a professor and chairperson of the department of teacher education at Bradley University.

He cited a a Pew Research Center report from July, which found that more than one-third of parents surveyed with children under the age of 12 reported that their child began using smartphones before the age of 5.

“Children who critically consume media text by understanding how the texts and images convey particular messages are more likely to be able to make informed decisions regarding what to believe and why, as well as what not to believe and why.”

– Vivian Maria Vasquez, a professor in the School of Education at American University

“Teaching media literacy can begin with the very basics with small children,” said Leilani Carver-Madalon, an assistant professor in the Master’s in Strategic Communication and Leadership Online Program at Maryville University. “For example, start by teaching them the difference between reality and fantasy on YouTube or on television.”

Parents can explain that people in commercials are actors performing roles, just like kids do when they play dress-up, for instance. This lays the foundation for understanding that media is not always an accurate reflection of reality and that the people creating ads, news reports, movies and more have particular perspectives they’re trying to convey.

“Children who critically consume media text by understanding how the texts and images convey particular messages are more likely to be able to make informed decisions regarding what to believe and why, as well as what not to believe and why,” said Vivian Maria Vasquez, a professor in the School of Education at American University. “They are also better able to articulate why they believe certain things and better able to make language choices that are socially just and equitable.”

Learning about the performative nature of commercials and different forms of entertainment can also help kids recognize that social media is often a curated highlight reel, not a depiction of reality.

“Probably the number one thing parents can teach their kids is to stop and think before they click,” said Robin Terry Brown, author of “Breaking the News: What’s Real, What’s Not, and Why the Difference Matters.” “Studies have found that people are much more likely to click on a headline or share a post if it makes them feel happy, angry or excited. And young people are among the most likely to read clickbait.”

Parents can encourage their kids to stop, take a breath and consider why a particular headline makes them feel a strong, knee-jerk reaction in the moment. They should consider whether the source is playing to people’s emotions ― like fear, anger and hope ― without presenting facts to back up the claims.

Consume media with them

A classic parenting experience is sitting next to your child to read a board book together, sounding out words, and commenting on pictures and plot developments. The same sort of thing should happen with other types of media, especially when in digital forms.

“Parents can prepare and support their kids, rather than just handing the iPad to them and walking away. Think about that side-by-side experience of working together,” said Michelle Lipkin, executive director of the National Association for Media Literacy Education.

She suggested parents ask their children to teach them how to play their new favorite online game or explain what’s going on in a show they’re watching.

“Talk to them about the content of what they enjoy consuming, rather than just telling them rules about what they should and shouldn’t be doing with technology,” she said. “Make comments about the things you watch together, like ‘That part made me feel sad’ or ‘I didn’t like the way the mom was portrayed in that scene.’”

“Parents can explain that a reliable news story will provide sources for their information and quote people on different sides of an issue.”

– Robin Terry Brown, author of “Breaking the News: What’s Real, What’s Not, and Why the Difference Matters”

As kids get older, parents can talk to them about news articles and clips they see.

“Parents can explain that a reliable news story will provide sources for their information and quote people on different sides of an issue,” Terry Brown explained. “They can help their kids identify the sources in the story; look for names of the people quoted as well as the organizations that provide the facts and figures. And if sources aren’t provided or if they are very one-sided, that’s a major red flag that the report isn’t legitimate.”

“Learning to watch out for misinformation is important, but it’s even more important to help kids learn to find good, factual information,” said Jeffrey Knutson, senior producer & content strategist for Common Sense Education. “There’s simply too much content out there for us to fact-check everything we see. It’s a lot easier, and maybe more effective, to teach kids where and how to seek out quality, factual sources of information.”

Parents can introduce their children to quality, journalistic news sources outside of social media or YouTube that focus on publishing factual information. They can also explain the journalistic standards and processes that reporters at respected news outlets must follow.

“You have to seek [good information] out ― you can’t just wait for it to be delivered to you on social media,” he added.

Critical thinking and media literacy go hand in hand, so parents should promote those crucial analytical skills in their everyday lives.

“Because we live in a media-saturated world, it is important that parents create spaces for talking about the texts and images that surround them as the first step in helping them to critically consume what they view, read and hear,” said Vasquez. “The place to start is with a child’s inquiry questions, their passions, their interests. In other words, work with media texts they are interested in exploring and discussing. We can then ask children simply to say something about what they are viewing, reading and hearing to get a sense of the effects of media texts on their understanding of the world around them.”

Encourage kids to talk about the way things they see and hear make them feel ― whether it’s a social media post or a news clip on TV. Talk about times they may have seen something they thought was true but then later found out it was false. 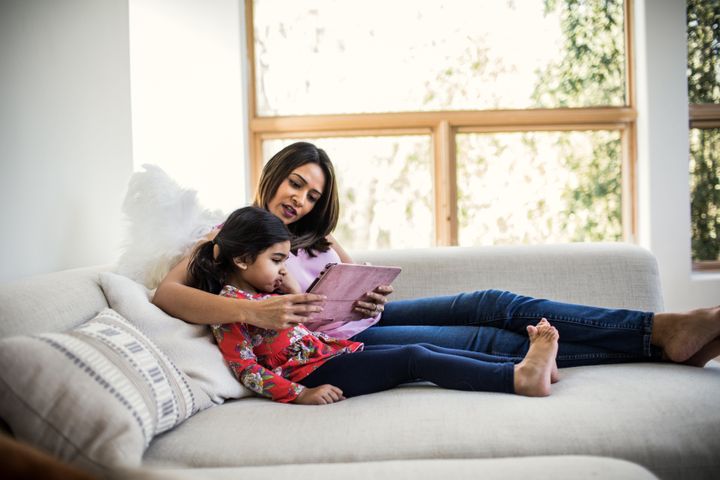 Parents should strive to make media consumption a non-passive activity.

There are many basic questions parents can ask about any media their children consume, whether it’s a social media post, news report, movie or YouTube video. Some example questions experts shared with HuffPost include:

Parents can also encourage kids to come up with other questions and foster their curiosity about different pieces of media. The key is to always try to make media a non-passive activity.

“Help kids become smart consumers by paying attention to what’s on the outside vs. the inside of that toy or food product they really want and help them understand that advertising is intended to be persuasive so that you want to buy the product,” suggested McGuire.

“Ask things like, ‘Did the media (the box package or commercial) match what was delivered? What did you notice about what was said about the product vs. what you actually see when they have it in your hands? Did the media accurately represent the product in the pictures or in the commercial? How does the advertisement make you feel?’” she added. “And talk about what about the ad made them feel that way.”

“The news and media landscape is complicated, and it can be confusing ― but it’s so important that we don’t just throw up our arms and say things like, ‘Well, you just can’t trust anything you read anymore!’”

As with other skills, kids can learn media literacy not only from hearing what their parents explain to them but also from what they observe their parents doing.

“The most important thing parents can do is model good media and news literacy for their kids,” Knutson said. “Show them that you yourself are interested in finding factual news and information. And most importantly, model for your kids that you can be skeptical, without becoming cynical.”

“The news and media landscape is complicated, and it can be confusing ― but it’s so important that we don’t just throw up our arms and say things like, ‘Well, you just can’t trust anything you read anymore!’” he added. “It’s critical that we reinforce for kids that facts do exist, and that quality, trustworthy information can be found.”

Parents can also model healthy relationships with news media by being mindful of how often they’re tuning in, especially if they’re prone to constantly refreshing Twitter or keeping cable news on all day.

There are many books and online resources to help parents guide conversations about media literacy with their children ― and further educate themselves.

Pinna’s weekly “Time for Kids Explains” podcast has a recurring segment in every episode called “Fact or Fishy?” that encourages kids to think about what’s credible in the news. McGuire suggested parents also check out the Center for Media Literacy’s list of tips, ideas and internet resources.

Terry Brown pointed to the News Literacy Project, as well as her new book, “Breaking the News: What’s Real, What’s Not, and Why the Difference Matters.”

Tags:
Previous Article
Strengthening media literacy to win the battle against misinformation
Next Article
What it’s like to visit Mexico City now

What’s the point of laws banning kids from social media if EVERYONE just ignores them?
admin October 30, 2021

Should Young Kids Use Snapchat and Instagram? New research

What’s the point of laws banning kids from social media if EVERYONE just ignores them?